If there's one thing Star Trek: Lower Decks is unapologetic about is how deep the animated comedy is willing to go for its self-awareness and embracing its lower-brow nature. It's literally starting to feel like a series that Seth MacFarlane (as opposed to The Orville) was put in charge of instead of Mike McMahan the way it throws itself out there for approval. It throws out reference after reference to hook in the die-hard fans, but for new audiences, it won't hit as much as it should. The latest episode "An Embarrassment of Dooplers" is a prime example of that. There are minor spoilers for the episode so consider this an official warning.

The U.S.S. Cerritos hosts a Doopler (Richard Kind) for a dinner, but the problem with the species is that any moment of self-consciousness causes them to duplicate into a humanoid Tribble problem because the creators box themselves in where they conveniently created a crisis that writes itself. The sheer act of duplicating creates embarrassment and then repeats. While the bridge crew is occupied on one end of the ship, Tendi (Noël Wells) and Rutherford (Eugene Cordero) are also dealing with the same problem on the other end. It's the exact same scenario I could see Family Guy doing exactly the same thing for its character Mort. Meanwhile, Boimler (Jack Quaid) and Mariner (Tawny Newsome) try to get into a prestigious party comprised of higher-end Starfleet officers. While the Cerritos is a lower class ship, Mariner devises a plan to sneak herself in as a +1 with Boimler pretending to act as his double on the U.S.S. Titan.

Written by David Ihlenfeld and David Wright, "An Embarrassment of Dooplers" felt predominantly like a glorified filler episode that drives the point home that as "refined" of an institution as Starfleet is, there are still haves and have nots. As if the shameless excuses for Easter Eggs weren't already more than enough, the latest fourth wall break is Lt. Commander Data Bubble Baths are a "thing" now and in the world of Star Trek, officers are celebrities that can be merchandised. Not to overthink things since ViacomCBS already exploits the franchise financially every which way possible, perhaps it's a nod to Mel Brooks and Spaceballs. Now there's something I can respect. New episodes of Lower Decks stream Thursdays on Paramount+. 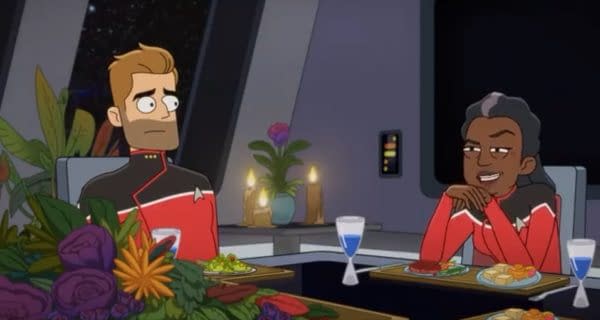 Review by Tom Chang
6/10
A recycled Tribble story featuring Richard Kind as the duplicating Doopler anchors what seems more like a filler episode showing audiences again how the U.S.S. Cerritos has to fight harder to get respect.
Credits
Director
Kim Arndt

Tokyo Vice star Ken Watanabe pushes back on how The Last Samurai did more for Asian representation than have the "white savior" narrative.

Paramount+ released a Star Trek featurette on the TOS legacy characters in Strange New Worlds, from the original actors to the current.