The latest episode of Star Trek: Lower Decks contains two arcs that kind of ring familiar to another iconic animated sci-fi series (Futurama) in the episode "Where Pleasant Fountains Lie". The first involves Lt. Commander Billups (Paul Scheer), who for some reason they give an actual plot to when in previous episodes, he's lucky to have had a line or two. The second arc involves Mariner (Tawny Newsome) and Boimler (Jack Quaid) on a mission that one of them never really wanted to be on as they both find themselves marooned on a desert planet with a megalomaniac sentient AI (Jeffrey Combs).

Too Predictable of An Episode for Star Trek: Lower Decks

The first arc explores Billups and how he comes from royalty, with the Queen trying to take his place on the throne and giving up his chastity. Aside from the fact the series spends almost zero time developing the character from previous episodes, we get the familiar trope of how he justifies his life in Starfleet to his people. While some feel like it has The Original Series vibes in trying to challenge conventions, it feels more like Lower Decks' animated predecessor Futurama, which is more of a parody-within-a-parody. It would be more effective if the characters involved were those we wanted to have a long-term investment in like Futurama's Zap Brannigan, Fry, or even Kif, but that's clearly not the case since right now we have Lower Decks' Billups.

As far as the B story goes, Newsome, Quaid, and Combs do a wonderful job playing off each other as the two try to find a place to take refuge and a replicator with black licorice issues. It becomes a cerebral cat-and-mouse game that's hard to mess up, because of the rapport that Mariner and Boimler have established. Add in the temptation from AGIMUS played devilishly by Combs and you get a great combination that's consistent with the comedy and tension of the series. Directed by Jason Zurek and written by Gerrick Bernard, the B-story saves the episode from another average turnout. New episodes of Star Trek: Lower Decks stream Thursdays on Paramount+. 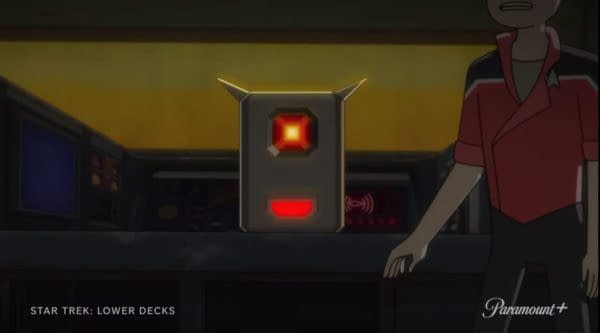 Billie Piper returns later this year for the 3-part anti-Christmas special I Hate Suzie Too and here's a preview of what viewers can expect.