Star Trek: Lower Decks episode "The Spy Humongous" is probably the most uninspired of the second season. The main arc deals with a peace negotiation with the Pakled homeworld and their overly simplistic ways. The second arc deals with random alien samples that the lower deck ensigns tackle. Consider this your spoilers warning (for what it's worth) for the episode directed by Bob Suarez and written by John Cochran.

The Pakled, voiced by Rich Fulcher and Brian Posehn, are a large and simple-minded race that use their brute strength and weaponry to impose their will, with their decision-making based on who has the biggest crown. The senior officers of the U.S.S. Cerritos largely humor them as one flees aboard the ship from the planet's surface to "seek asylum" with Federation help. Moving ahead based on some assumptions about Ambassador Grubin (Fulcher), he tries to ask about different parts of the ship's operations to learn "secrets" (in a not-so-subtle way).

The second arc felt pretty random as if it was leftover filler that they tagged on here because it wouldn't fit anywhere else. Initially, they're dealing with mundane activities like crate stacking before Boimler (Jack Quaid) runs into a group of redshirts who clamor for leadership roles before ending up mostly talking without any real action. Aside from not exploring the franchise's reputation for random redshirts suffering from a rash of premature deaths over the years, it felt like the group didn't really have to do much to win Boimler over other than a cheap ego boost since he clamors to be a leader and is willing to do everything he can to go up the ranks. Shifting back to his friends, they stumble upon another round of "science-experiments-gone-wrong" as Tendi (Noël Wells) falls victim to all of them. At one point, she ends up getting swallowed by an alien creature and turned into a scorpion-like creature. Yeah, it was like that. I expected better, but it is what it is- which really isn't the attitude I should be having about this season. New episodes of Star Trek: Lower Decks stream Thursdays on Paramount+. 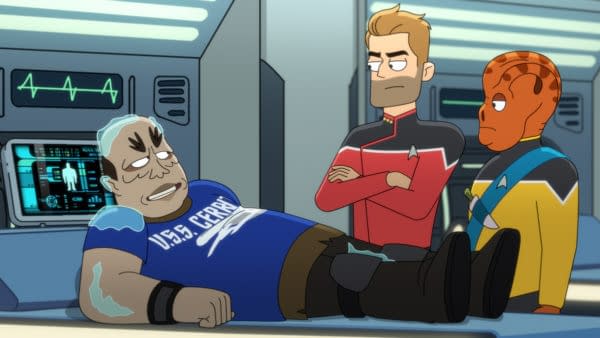 Review by Tom Chang
0/10
"The Spy Humongous" is a textbook example of how throwing everything against the wall and hoping more sticks than doesn't isn't always the way to go for Star Trek: Lower Decks.
Credits
Director
Bob Suarez

Doctor Strange in the Multiverse of Madness star Elizabeth Olsen reveals that her commitment as Wanda/Scarlet Witch cost her other roles.