On a very special episode of Star Trek: Lower Decks, the U.S.S. Cerritos travel to Deep Space Nine, which sounds more like a theme park attraction and, naturally, a trip down memory lane of the beloved '90s syndicated series that starred Avery Brooks. "Hear All, Trust Nothing" provides an update of the leftover crew members of the space station in Nana Visitor's Col. Kira Nerys, who was Sisko's right-hand and Bajoran liaison during the series and Armin Shimerman's beloved Ferengi barkeep Quark. This is your minor spoilers warning.

The arc the senior officers are tasked with is that Capt Freeman (Dawnn Lewis) is taking over negotiations with the Karemma, a mercantile species from the Gamma Quadrant, whose relations were affected following the Dominion War. We find out that Bajoran Lt. Shaxs (Fred Tatasciore) has a rivalry with the former major and current head of DS9, which is convenient given their naturally standoffish ways. As per what was on brand for DS9, there are multiple arcs with different characters befitting the robust station.

Mariner (Tawny Newsome) is trying to gain greater acceptance with another ensign in Jennifer Sh'reyan (Lauren Lapkus) by entertaining her social circle in a salon on the Cerritos, which goes about as well as you expect in a socially awkward situation. Rutherford (Eugene Cordero) fanboys over parts of the station. "Bold" Boimler (Jack Quaid) works up his gambling skills at Quark's, and Tendi (Noël Wells) tries to fend off stereotypes when fellow Orion and DS9 local Starfleet officer Mesk (Adam Pelly) annoys her by playing them up.

Directed by Fill Marc Sagadraca and written by Grace Parra Janney, "Hear All, Trust Nothing" does mesh the crossover concept nicely, feeling like a lighter episode of DS9 while not going darker or more serious on the Lower Decks side. Kira and Quark felt like their old selves, but if there was one thing both presences have that kind of made it a bit heartbreaking, it was that giant void left behind by Odo actor, the late Rene Auberjonois. The character's presence was such a huge part of what made Kira and Quark on that series, and I'm curious about what could have been if he returned despite his chosen fate on DS9. Otherwise, it's another memorable classic, which I hope Star Trek shows revisit again in the future. 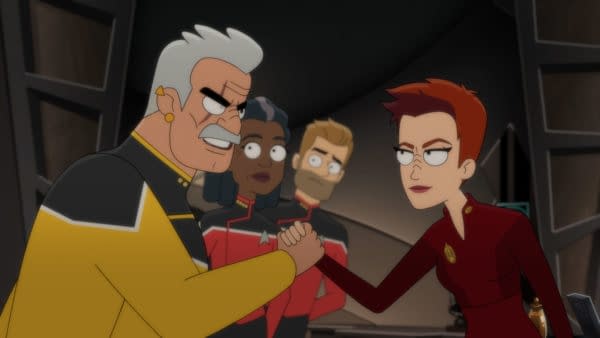 Review by Tom Chang
8.5/10
From the nod to the Deep Space Nine intro to kick things off, Star Trek: Lower Decks S03E06 "Hear All, Trust Nothing" is a love letter to the series & its faithful fanbase. Nana Visitor and Armin Shimerman revisit their signature roles as if not a minute has passed since their original runs as their characters.
Credits
Director
Fill Marc Sagadraca

Lorne Michaels & NBC's Saturday Night Live checked in to see how Steve Martin and Martin Short were holding up during SNL read-thru.

What We Do in the Shadows: Harvey Guillen Confirms Season 5 Wrap

What We Do in the Shadows star Harvey Guillén (Guillermo) took to Instagram to confirm that filming on the fifth has officially wrapped.