The Star Trek: Strange New Worlds season one penultimate episode "All Those Who Wander" certainly evoked the Alien franchise, namely the 1979 Ridley Scott classic. The beginning reminded us how well star Anson Mount would be as a TV chef as Captain Pike hosts a few news items of the day with a promotion, and sees two cadets off from their rotational service on the Enterprise. Following much of the pomp and circumstance, the ship gets called away to a frozen planet where a Federation ship is missing. Consider this your minor spoilers warning moving forward.

How Star Trek: Strange New Worlds Did Horror Better than The Orville

One of the two cadets wrapping up her time is Uhura (Celia Rose Gooding), who joins the away team as her final mission before her next assignment. Obviously, we won't know how long she'll be away before her imminent return given the current canon. All of the senior officers are on the away team, except for Riley (Rebecca Romijn) and Ortegas (Melissa Navia). Without giving much more away, this is horror done right, no disrespect to The Orville: New Horizons episode "Shadow Realms". We saw a number of staples of good horror regardless of the environment, including numerous breadcrumbs from smears of blood, enough subtle gore to evoke a sense of terror, and a genuine sense of dread throughout the crew that literally anyone could end up a casualty all the way until the shocking ending. "Shadow Realms" played it extremely safe where I could never take the horror seriously.

Directed by Christopher J. Byrne and written by Davy Perez, there was so much credit that deserves to go around for some truly impressive performances, especially Ethan Peck, who unravels another nuanced performance as Spock trying again to keep the balance between the stoic logic of his Vulcan side to the untapped adrenaline and rage from his human side. Jess Bush's Nurse Chapel comes from a similar position as someone who's always prepared to deal with any potential abnormality regardless if it's on the Enterprise or on the away team to fleeing in terror for her life. Even the returning Dan Jeannotte as Lt. Sam Kirk is far from his cool, collected self (especially given the carnage the crew witnessed). We even get an instance where he yells at Spock that evoked memories of "Bones" McCoy.

As far as the enemy the Enterprise does face, I'm really digging into how they're rewriting the Gorn as such a bigger enemy than ever before no matter how much fans might gripe. It was a huge step forward for Christina Chong's La'an to be able to help better confront her greatest mortal enemy as well as see Chief Engineer Hemmer (Bruce Horak) shine again offering timeless sagely advice about appreciating her time on the Enterprise. "All Those Who Wander" is a near-flawless classic. 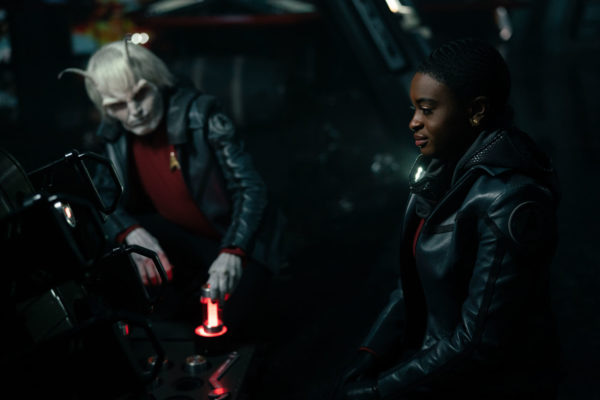 Review by Tom Chang
9.5/10
Paramount+'s Star Trek: Strange New Worlds' penultimate season one episode "All Those Who Wander" offered some of the best and most exciting sci-fi/horror since 1979's Alien, with a solid amount of gore and suspense from start to finish. Wonderful performances from Anson Mount, Ethan Peck, Celia Rose Gooding, Christina Chong, and Bruce Horak make it one of the best of the season. Can't wait until the season finale.
Credits
Director
Christopher J Byrne