This week's episode of Paramount+'s Star Trek: Strange New Worlds episode "The Elysian Kingdom" is about as devilishly deceptive as it gets with the cast (save for three of the actors) playing completely different roles. The ongoing arc regarding the U.S.S. Enterprise's doctor M'Benga Babs Olusanmokun is desperately trying to keep his daughter Rukiya (Sage Arrindell) alive given her terminal illness. Without any major progress made on her degenerative condition, he reads to her for short periods of time in her physical form before having to place her into the pattern buffer to keep her alive. Consider this is your minor spoilers warning moving forward…

The episode finds M'Benga painfully overworked balancing his duties as Chief Medical Officer and trying to find a cure for Rukiya. When First Officer Una Chin-Riley (Rebecca Romijn) reminds the good doctor of his neglected duties to a landing party, she notices how exhausted he is and orders him to get some rest. While the Enterprise is exploring a nebula, they encounter difficulty escaping its grasp. Following a slip from Helmsperson Ortegas (Melissa Navia), the restless doctor is called to duty again so it's back to the bridge… only to find the Enterprise reflects the very story he's been reading to his daughter.

Given the medieval nature of the fairy tale, M'Benga discovered that only he retains his own memories as the crew takes on the persona of the characters from the book. And given that kind of opportunity, the cast at large really ate up their new roles in true, full-on renaissance festival fashion. Anson Mount's Capt. Pike becomes a conniving coward. Navia's Ortegas is the king's faithful servant always looking for action. Christina Chong's La'an becomes the complete opposite of her tough-as-nails persona, changed to a fair Disney princess, hamming it up to even showing off her vocal chops. M'Benga is the "king" and main character of the story. His rival is Celia Rose Gooding's Uhura as the evil queen challenging his territory.

The spectacle is something to be experienced. The biggest standout is Bruce Horak's Hemmer, who is one of the few who isn't affected psychologically but provides the masterful awkwardness trying to get into character as a "wizard". It's a degree of self-awareness that helps make an already special episode go that extra mile. The ending was also refreshingly subversive and provides a perfect metaphor for parenting. Directed by Amanda Row and written by Akela Cooper and Onitra Johnson, "The Elysian Kingdom" is another outside-the-box classic reminiscent of the Holodeck-centric Star Trek: The Next Generation and Deep Space Nine episodes. It says a lot about an episode that left me wondering what DS9 star Avery Brooks would have thought of it, and it stands as another example of how this series continues to offer refreshing twists on classic takes. 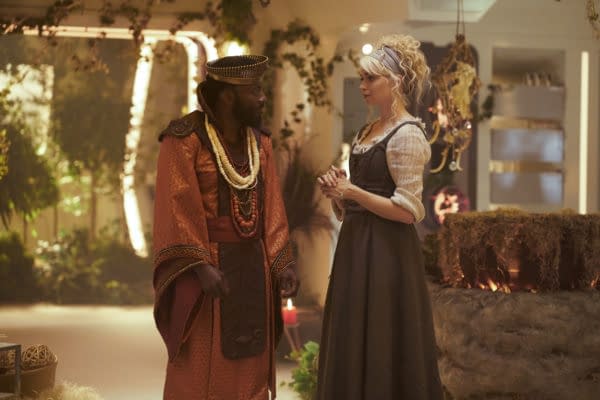 Review by Tom Chang
9/10
A very delightful episode of Paramount+'s Star Trek: Strange New Worlds, "The Elysian Kingdom" allows the crew to put on their best medieval fantasy faces. Babs Olusanmokun is a great lead focus of the story while his co-stars (particularly Christina Chong, Melissa Navia, and Anson Mount) battle it out to see who can steal the next scene. And Amazon, take note. Ethan Peck and Rebecca Romijn should be in the running for guest spots on The Lord of the Rings: The Ring of Power in the near future. Just a thought...
Credits
Director
Amanda Row