Paramount+'s Star Trek: Strange New Worlds S01E03 "Ghosts of Illyria" offered the biggest threat to the Enterprise so far this early into its run: a ship-wide epidemic following a mission at an abandoned research facility on a largely desolate planet. Most of the Away Team escapes except for Captain Pike (Anson Mount) & Spock (Ethan Peck), trapped in the facility thanks to an ion storm. From this point forward, consider this your minor spoilers warning alert

"Ghosts of Illyria" begins as the usual Star Trek episode of this type as some members of the crew begin showing symptoms early on but that shifts down to a slow build. And that includes Cmdr Una Chin-Riley (Rebecca Romijn), which is an even bigger problem since she's assumed control now that Pike is stuck on the planet's surface. Romijn easily turns in her most powerful performance to date in the franchise dating back to her debut on Discovery. There are so many layers of her character to unpack, but most importantly, it's the kind of opportunity that well-establishes Romijn's capability to carry the series on her back when need be.

Just as much of the strength of The Original Series was its core in William Shatner, Leonard Nimoy, and DeForest Kelley, Strange New Worlds can easily have the potential to match and dare I say, exceed them in Mount, Peck, and Romijn. It's not a comparison to take lightly, because each actor has already committed enough to the respective characters that they've earned the right to be in the conversation. While Pike and Spock were stuck in the B-story, Riley's interactions with the crew were almost next-level, especially with Hemmer (Bruce Horak), La'an (Christina Chong), and Dr. M'Benga (Babs Olusanmokun).

The episode does put some major issues in play when it comes to the franchise's past and known canon, with a nod to the timeline's distant future. Because it was subtle and not forced, it was something that "Star Trek" fans could appreciate. Star Trek: Strange New Worlds S01E03 "Ghosts of Illyria" places a major piece of the Star Trek lore puzzle that most fans will be pleasantly surprised by, while the new series continues to be a pleasant surprise. 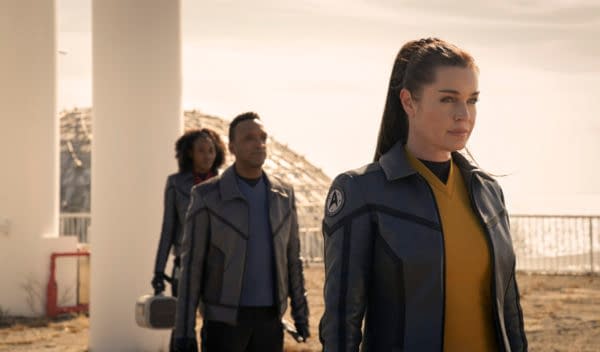 Star Trek: Discovery star Sonequa Martin-Green breaks down Michael Burnham's journey to being captain, the challenges ahead, and more.