Just when you think the flashbacks might be over, there is still tons more to cover in The Book of Boba Fett on why we should care how Boba Fett (Temuera Morrison) finally came to his current motivation. The latest episode "Chapter 4: The Gathering Storm" finally shows how the one-time Sarlaac resident came to become besties with fellow bounty hunter Fennec Shand (Ming-Na Wen). For the uninitiated, they crossed paths around the time of The Mandalorian when the latter was left for dead following the botched job that found her facing a potentially mortal wound to the abdomen. While clad in the black robes of the Tuskens, Boba and his faithful Bantha companion stumble upon her near death. Minor spoiler warnings from here on out. If you're wondering if Morrison and Wen did their probably non-existent Billy Crystal and Meg Ryan impression based on the headline, sadly, she did not.

Boba takes her to a facility to cybernetically heal her wounds with the help of Modifier (Thundercat) since Palpatine "failed" to pass that universal healthcare initiative. As with the social commentary, Boba's bag of money gets him bumped to the front of the line. While we're not treated to a rendition of The Turtles "Happy Together", a still woozy Fennec listens to her savior's words and renewed purpose- wanting a better life than just the cut-throat nature of bounty hunting. While initially scoffing at the notion, Fennec's word is her bond since she wanted to repay a favor for her life and that request first comes in the form of retrieving his legendary ship formerly called Slave I in "Star Wars" canon which is discovered still at Jabba's palace then run by Bib Fortuna. As much of the episode takes place within the flashback, we do get movement on the incoming threat Boba faces as acting daimyo of Mos Espa and what he has to work with from the local crime lords.

I'm glad it finally took four episodes to find out why people should give a damn about Boba's cause. He finally graduated from "Hey, I know that guy from those two movies he was all in for a minute with that cool armor." Yes, I'm aware The Mandalorian paved much of this, but leading up to "The Gathering Storm" felt like a glorified preview leading to this. I'd even make the argument that this should be the first episode. Reediting this with "Stranger in a Strange Land" would have gone a long way for making a far more effective premiere episode. Sure, a lot of the discourse stems from the disappointment that this isn't a "Mandalorian" clone, but I'd argue, we shouldn't have to have waited for four episodes to finally understand why Boba didn't want to be a bounty hunter anymore. And I'm not really giving a damn about his quest for the magic gaffi stick. My point is we should have found out from the getgo why he wanted to change his ways before he went on his spirit journey of self-discovery with the Tuskens. Everything else would have fallen in place. Now that everyone's caught up and we're just at the halfway point, perhaps this redemption is finally worth the insufferable exposition that made the bulk of the series.

The Book of Boba Fett Season 1 Episode 4: "The Gathering Storm" 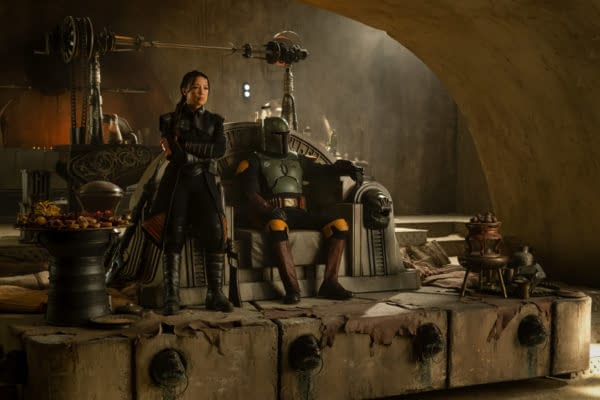 Review by Tom Chang
4.5/10
Much of the fourth episode of Disney+'s The Book of Boba Fett felt like it should have been the premiere episode for the "The Mandalorian" spinoff series. A pretty standard outing, though I'm pleased we finally got the root of Boba & Fennec's bond and also got a look at a little "Sarlaac Spelunking."
Credits
Director
Kevin Tancharoen