FOX's The Great North witnessed a less-than-favorable sibling reunion between the richest man of Lone Moose, Richard 'Dick' Chateau (Adam Godley), and his brother Rick (Tom Ellis) in the most recent episode, "Dick, Rick, Groom Adventure." Some minor spoilers may be ahead, so consider this your fair warning before reading any further…

The Great North won my heart over having Ellis voice Dick's brother, Rick, as it fits the character perfectly. Ellis definitely shows he has a knack for voice-acting, and I'd love to hear him in future episodes. It was fun seeing Beef's (Nick Offerman) brother, Brian (Rob Delaney), displaying his odd love for hot tubs. The brothers may sometimes have difficulty discussing important subjects with one another, but when they do, it becomes a great opportunity to see character growth between them. Seeing the Tobin kids get sucked in by the allure of the yachting lifestyle was hilarious and accurate. There's a highlight to material possessions not only when you're a kid but also as an adult. Also, the suits they ended up wearing to Dick's brother's wedding reminded me of Dumb and Dumber, and I'm beyond thankful for that.

The Great North had to go through a lot to measure up to the greatness that was the previous episode. While this episode didn't compare to that one, it did have some great moments of depth and occasional jokes that made it decent and fun to watch. It's great to see how people don't hold conversation flaws against Beef because he tends to rectify and talk through whatever he might have done that could've upset the other person. Beef and his brother talking through the state fair events was not only a great example for Dick to witness, but it also became a way to show how conversations and resolutions between characters don't have to blow up or become more than they would realistically be.

The Great North developed the connection between Beef and Brian in a great way, but the drive and interest in the episode's storyline kept feeling below average in the end. There can be depth and hijinks in an episode together. This story felt like it continued to tread lightly around any action-filled or tense yet comedic scenes in an effort to focus on depth. In the end, much more fun could have been injected into the story while maintaining character growth. Hilarious moments like the wedding surprise, Alyson (Megan Mullally) being the wedding photographer, and the Yeti appearance on the docks could have been surrounded by similar moments. Invigorating and intriguing moments don't have to be sacrificed in order to make room for depth. Sadly, some of that sacrifice was unnecessarily made in an episode filled with opportunity.

Put me in the cata-combs 'cause this guy just killed me. 💸 #MusicMonday pic.twitter.com/NEOKk0wvpy 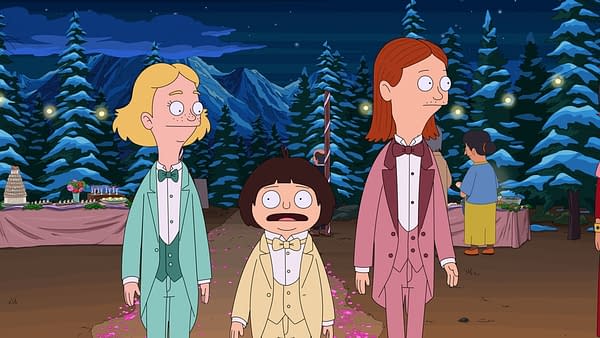 Review by Brittney Bender
6.5/10
FOX's The Great North, S03E08 "Dick, Rick, Groom Adventure," brought a lot of depth to the relationship between Beef and his brother, but it lacked a boost to the story itself that would make it a truly fun watch. Some hilarious moments fell between the cracks as the story attempted to find solid ground to make the watch worth it.
Credits
Network
FOX