Hulu's The Orville: New Horizons episode "Shadow Realms" attempts to genre blend sci-fi with horror to mixed results. The start of the episode has the Planetary Union hosting the Krill in a temporary alliance while both are at war with the Kaylon. To help with negotiations, Admiral Christie (James Reed) steps up to broker the agreement with The Orville's Capt Ed Mercer (Seth MacFarlane) and First Officer Cmdr. Kelly Grayson (Adrianne Palicki). Part of the deal involves exploring a part of space that the Krill considered dangerous and cursed. Skeptical, Ed decides to explore some "new horizons". Consider this your minor spoilers warning.

Prior to taking on the mission, we discover that the admiral was once married to the ship's doctor, Dr. Claire Finn (Penny Johnson Jerald) and they had deep affections for one another, but their careers changed those plans. Upon trying to explore an abandoned space station, the instruments prove to not be very useful as the away team attempts to explore the unusual bio-organic nature of the ship. The colors present a demonic hell-type of setting. One of the members becomes afflicted with a mysterious pathogen from the station once they return to the Orville.

Following the setup, it feels like the episode seemed more concerned with checking off the boxes to make sure all of the horror marks were hit than taking the time to dig deeper into each one. And one of those involved questionable decision-making to keep the story moving. For example, the patient in question is never quarantined in the sick bay since they know nothing about the pathogen. Aside from that bit of detail, we also get a "powering down" as the crew loses control of the ship so we have an excuse to have the "lost in the dark with an unknown threat" portion taken care of. Meanwhile, everyone gets the bare minimum to do in a rush to the finish. Jerald is the only one here given any weight to drive the episode, and as expected she more than makes the most of it. It would've been nice to know more about Christie and Finn's past, but it is what it is. As a horror-themed episode, "Shadow Realms" was a pretty lackluster effort. With a reputation for taking tropes and twisting them in its own unique way, I was expecting more than just the standard horror cliche "ABCs"  from The Orville. 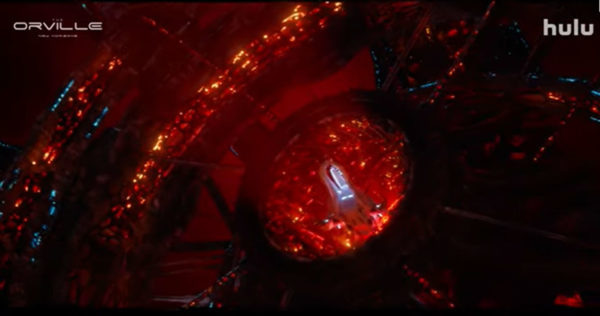 Review by Tom Chang
7/10
Written by Brannon Braga and André Bormanis, The Orville: New Horizons S03E02 "Shadow Realms" seemed more concerned with checking off the boxes to make sure all of the horror marks were hit than taking the time to dig deeper into each one. Thankfully, we have Penny Johnson Jerald on hand to save the day with an impressive performance.
Credits
Director
Jon Cassar