What If…? episode seven doesn't focus on a character dying, unlike previous characters, but it is a perfect example of the theme of this show; all of our favorite heroes are on small change away from being terrible people. And in the case of this episode, one lost relationship for Thor has turned him into an unlikeable character that isn't fun and incredibly boring to watch.

It seems that we manifested a new type of episode of What If…? that seems to hit all of the previous talking points about focusing on character instead of people just dying. However, Marvel has done something rather interesting here, and that is to show that they have very little faith in the character of one of its heroes, and this seems to be a running theme over the show. Apparently, our Marvel heroes are a very small change away from being terrible people. We saw this in episode 3, in episode 4, and again in this one. It seems that most of our heroes turn out to be pretty awful if you take just one small step away from their journey. There are moments in your life that define who you are, but they don't change the content of your character. In the case of this episode, losing his not-great relationship with Loki has turned Thor into an intergalactic frat boy with zero redeeming qualities aside from his ability to bring people together for a party. The Thor we met in the first movie needed to be humbled, but apparently, losing Loki means that Thor is just terrible now and not someone you want to watch for an entire episode.

Then there is how this What If…? episode treats its female characters and bow howdy do we need to talk about this. The thing that made Jane Foster interesting as a love interest is not only is she smart, but she's someone with a good head on her shoulders. She's smart and apparently worthy of picking up the hammer in the upcoming movie. This version of Jane Foster apparently needs Thor to hit on her a few times, see him do precisely nothing but party, and act like a dudebro, and with one flip of his golden locks, she apparently falls in love. Despite the evidence that Thor showing up could be a very bad thing for Earth, she ignores that because she spent a night partying with him, and thus she knows who he is. This is the equivalent of going to a keg party at a frat, watching a guy do ten keg stands while hitting on you, and waking up the next morning and deciding that that night debauchery is proof that he's a good person worthy of making goo-goo eyes at. It's insulting to a character that is worthy of Mjolnir.

In WandaVision, it was established that Darcy is an insane smart character, but this version apparently goes out to do some of the dumbest and most cliche things you can do on a Vegas bender. Maria Hill has apparently lost all sense of apathy and is giving orders that were called a "stupid ass" decision in a previous movie like it's no big deal. Then there's Captain Marvel, who is here to be a party pooper and giant buzzkill for Thor's party. He quite literally tells her that she should smile more and then spends half the episode not being able to put dudebro Thor through a wall. It apparently takes very little for her to forgive him because by the end of everything, dudebro Thor is so dreamy that we have to make sure he doesn't get in trouble. There apparently isn't a concern for anyone who has gotten hurt during these intergalactic frat parties, and they only seem to care about damage when it might lead to consequences. Captain Marvel and Thor are supposed to care about others at least a little, but apparently, it doesn't matter.

The What If…? motif is starting to ring incredibly hallow seven episodes in, and the idea that they are making a season two is something worth dreading. These seven episodes have been declining and getting more and more boring. There is absolutely room to explore a Thor that was an only child; that could have been interesting, but Marvel is just showing how little faith they have in their own heroes being ultimately good people. This episode also feels hugely out of place for the entire series. While this show has been leaning on the angst heavily since episode three, this one didn't like it should be in the same series. There doesn't appear to be anything cohesive going on here, nothing that brings everything together, aside from proving that the main timeline is the only one where our heroes aren't terrible people. We have three more episodes left, and at least some of them are going to be a crossover or a team-up or something, but a team-up of a bunch of characters we aren't invested in isn't going to work. Just ask DC and Justice League. 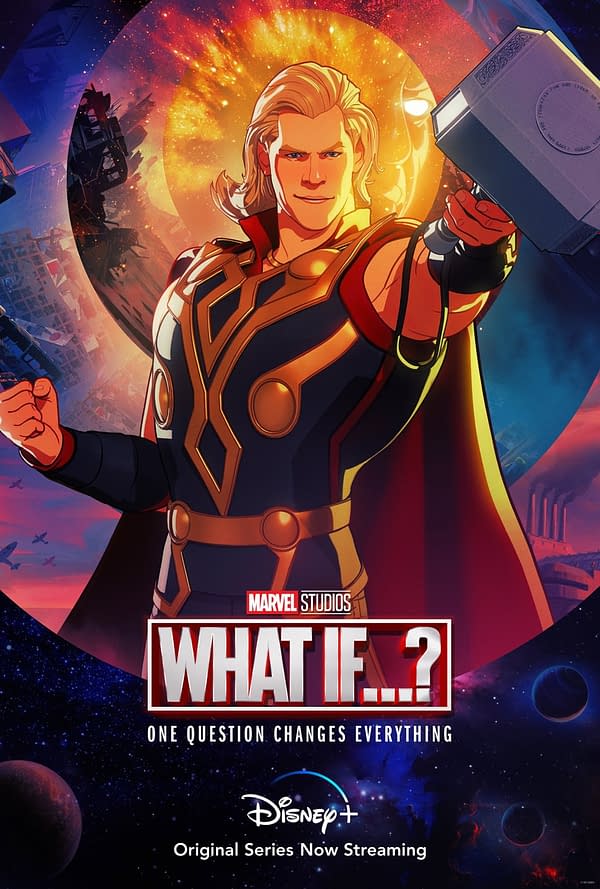 Review by Kaitlyn Booth
5.5/10
What If...? episode seven doesn't focus on a character dying, unlike previous characters, but it is a perfect example of the theme of this show; all of our favorite heroes are on small change away from being terrible people. And in the case of this episode, one lost relationship for Thor has turned him into an unlikeable character that isn't fun and incredibly boring to watch.

Let's Talk About Criticizing a Movie in Spoiler Culture

On Monday, two critics who attended the premiere for Eternals posted spoilers to social media. So let's talk about critical analysis in spoiler culture.

Emily Blunt is reportedly in talks to join Christopher Nolan's next movie, Oppenheimer. It currently has a release date of July 21, 2023.

The first reactions to Eternals are out and about on the internet for the critics that got to attend the world premiere. Fair warning to those looking to

Dune is awkwardly paced and has the problem of very much feeling like half of a movie, but everything else on screen is so good that it's worth sitting

It feels like Resident Evil: Welcome to Raccoon City was announced, filmed, and is coming out in a little over a month within the span of about a week.

The Flash Director Andy Muschietti Confirms That Production Has Ende

After sharing a brief teaser for The Flash at DC FanDome on Saturday, director Andy Muschietti confirmed on Instagram that production has wrapped.

Batwoman: Dougray Scott is pushing back on Ruby Rose's claims, saying in a statement that they are "entirely made up"; Rose posts an update.

Here's a look at the Netflix employee walk-out to protest the streamer's handling of Dave Chappelle's special; plus, the text of the letter.

NBC's Saturday Night Live is checking in on host Jason Sudeikis to see how his SNL table read is going, and so far? It's looking all smiles.

Aquaman: King of Atlantis Preview: Did Someone Say, "Trident Battle"?

In the following preview for HBO Max's Aquaman: King of Atlantis "Chapter Two: Primordeus,' it looks like we have ourselves a trident battle.

In this preview for Dark Side of the Ring S03 "Extreme & Obscene: Rob Black’s XPW," New Jack explains a "perk" from working with XPW.