This is the Top Ten Bleeding Cool Bestseller List, as compiled by a number of comic stores from their sales on Wednesday and Thursday. It measures what are known as the "Wednesday Warriors", those who can't wait till the weekend to get this week's comics. And this week, the mutant titles continue to take the top… with Fallen Angels outdoing Marauders in recent lists. But Detective Comics bursting through the other DC comics, the only one yhat came close to challenging Marvel's mutants… though Far Sector did very well for a Young Animal title. 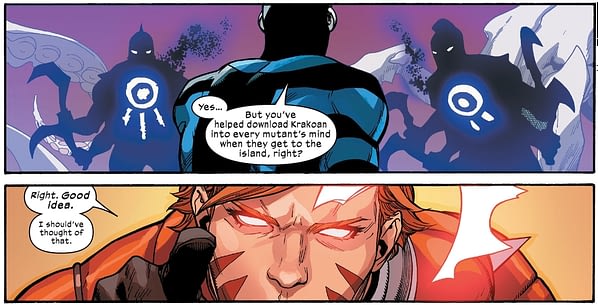 Let me start off by saying how happy I am that Morbius is NOT in the Top Ten for FFF's weekly bestsellers list. No disrespect to Vita Ayala and the rest of the creative team (They deserve to be on books that can actually showcase their talent!) but this is precisely one of those new #1 titles that literally nobody other than one of my employees asked for. On the more positive side of things, the X-Books are still standing tall with Fallen Angels and X-Men at the #1 and #2 spot respectively. I know a lot of people are only "testing the waters" with the first issues of each new X-book but if the second issue of X-Men is any indicator then hopefully we'll retain more readers than we lose. Event Leviathan ended on a strong note at the #3 spot. Hellmouth the Buffy crossover is also doing well.

We picked up a lot of new readers with the reboot and we've actually managed to maintain a lot of those readers well into a crossover. Superman managed to squeak out a few more sales than normal thanks to a beautiful Adam Hughes cover with the Trinity on it. If it weren't for the variants, we honestly wouldn't sell as many copies, unfortunately. Tales from the Dark Multiverse: Blackest Night was a surprise hit this week. It only just barely cracked the Top Ten hitting #9 but for a $6 book to do so well is a surprise to be sure. Detective Comics, Amazing Spider-Man, Guardians and Catwoman fill out the rest of our Top Ten spots.

Slower week overall. Fallen Angels, despite being the least-hyped out of the Dawn of X titles, did surprisingly well, but couldn't top X-Men #2, which sold just as well as the first issue. X-Men will obviously be the most likely to maintain the high numbers, but I'm interested to see where the rest of the titles fall over the coming weeks. Morbius #1 debuted with little fanfare, but performed about as well as expected, with a decent amount of folks picking it up, but just as many not acknowledging its existence.

Great to see Garth Ennis back on Punisher – still didn't rank for us though. Morbius & Far Sector both sold equally as well – again with neither ranking. Nobody fell for the marriage of Black Cat & Spider-Man. Acetate covers, while interesting are not equaling new sales

The last of this wave of X-Men #1s: FALLEN ANGELS, does well this week. However, it lost out on the #1 spot to the second issue of the core X-MEN title.

Selling somewhat more strongly than usual this week was CATWOMAN, coming in at 3rd instead of it's usual mid-list position. Maybe it was that sick acetate cover?

The most notable members of this week's top ten are definitely PUNISHER SOVIET -featuring Garth Ennis returning to the character with top-notch illustrator Jacen Burrows- and FAR SECTOR – the Young Animal imprint's take on a Green Lantern story with the absolutely stellar creative team of N. K. Jemisin and Jamal Campbell. Easily my favorite book this week.

Not the busiest week. The new stuff got the most attention.

Expected a better sales week with all the new 1st issues from Marvel and DC. Hopefully the rest of the week will see improvement.