With world-altering framing and sure hands comfortable with heavy lifting in a story, Dark Ages #1 posits a slightly different Marvel universe, just a variant stone's throw away from the Earth-616 that we know. A big, old secret is coming to bear, and this series will examine the challenges that are left in its aftermath.

Eons ago, before the formation of the Earth, one of the great old cosmic powers buried an annoying problem in the still-forming planet like a beagle hiding a treasured bone or the Mafia hiding Jimmy Hoffa under the end zone at Giants Stadium. There are a number of questions about how much of the extraordinary power and possibility that developed on Earth have to do with this cosmically empowered candy center being there and what happened to the power that created it, but those may be questions for another time. In any case, knowing that something like this could not possibly end well, a group known as Marvel's first race assigned one of their more erratic members to keep an eye on it and report back once all was tears and ashes.

Flash forward to (nearly) now. Peter Parker and Mary Jane Watson have a wall-crawling toddler; they enjoy friendly dinners with Luke Cage and Jessica Jones, and all is well until the spider-sense of almost every arachnid hero goes off at a level of 15 out of 10. The world's smartest person figures out what's wrong, and the heroes of the Marvel universe are off to the races … with a woefully underpowered plan and a set of glass cannons, which leads to an all-new, unexpected problem.

After DCeased and Injustice, Tom Taylor knows how to spin up an alternate universe like a website developer spinning up a test server — it's super easy, barely an inconvenience (or so he makes it appear). The framing of this script wields a crossover-sized cast with the delicacy and precision of a laser scalpel. Likewise, the thrilling, action-packed artwork from Iban Coello, Brian Reber, and Joe Sabino gives the mostly voiceover narration an exciting framework.

If there's an issue here, it's one of underlying conception, not execution. We've now seen "What If" scenarios played out with great impact on screen and even seen Stephen Strange's sloppiness leads to problems for everyone around him. This issue slides the perspective but leaves a lot of questions about its origins, and the questions that will nag at you while looking into the fridge are what kept this from greatness. RATING: HONORABLE MENTION.

Dark Ages #1
By Tom Taylor, Iban Coello
This is what the Watcher has been watching for! A danger older than the Earth threatens everything. For once, the heroes who have saved the planet so many times are almost powerless in the face of it. X-Men and Avengers assemble. Spider-People and Fantastic Four come together. Heroes for Hire fight alongside Champions. None of it will be enough. The lights are about to go out. The world outside our window…is about to end. An all-new saga of the Marvel Universe as you've never seen it before from Tom Taylor and Iban Coello! 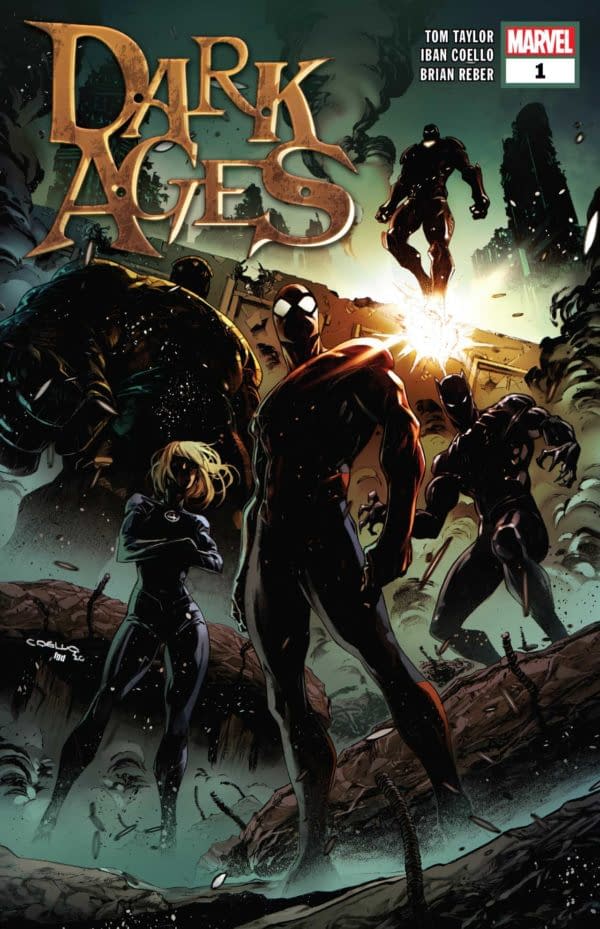 The Debut & Origin of U.S. Jones in Wonderworld Comics #28, at Auction

An obscure Fox Feature Syndicate character who got his own title and fan club, U.S. Jones debuted in Wonderworld Comics #28.

In this preview of Harley Quinn #16, it's revealed that the secret origin of new villain Verdict... is Harley's bad singing!

In this preview of Sabretooth #4, in stores Wednesday from Marvel Comics, the titular Sabretooth finds himself made suddenly rigid.

Jason Todd leads his team directly into a trap in this preview of Task Force Z #9, in stores Tuesday from DC Comics.