We're totally doing this every month now. A Marketshare-Per-Capita chart. The usual comics industry marketshare shows how much share of the overall market a comics publisher has. This divides it by the number of titles they publish in that month.

We've already looked at publisher marketshare in the North American direct market of comic book shops for March 2019, saw DC grab dollar dominance thanks to Detective Comics #1000 as Marvel Comics again took unit marketshare. And we looked at the top 500 ordered comics and graphic novels for the month.

But if you divide the marketshare by the number of individual titles published that month, you get a different picture.

In March, Marvel published 99 comics to DC and Image's 66 single comics each, through in graphic novels and magazines Marvel had 143 to DC's 101 and Image's 93.

Now, in January, Marvel still beat DC on both counts, in February, DC had a greater retailer marketshare per item distributed than Marvel, though brought in less revenue.

But in March? DC Comics dominate both, more in sales than revenue. It is worth mentioning that this also includes Marvel's dollar line of True Believers reprints adding to the numbers of titles published, but that also includes the Hulk #181 facsimile reprint that outsold that month's regular issue of the Immortal Hulk. Dynamite and Archie also continues to outperform, per title, as Dark Horse begins to drop a little… and Boom and Titan are level-pegging.

I hope this, as ever, is a conversation point.

And here are the full stats for comparison… 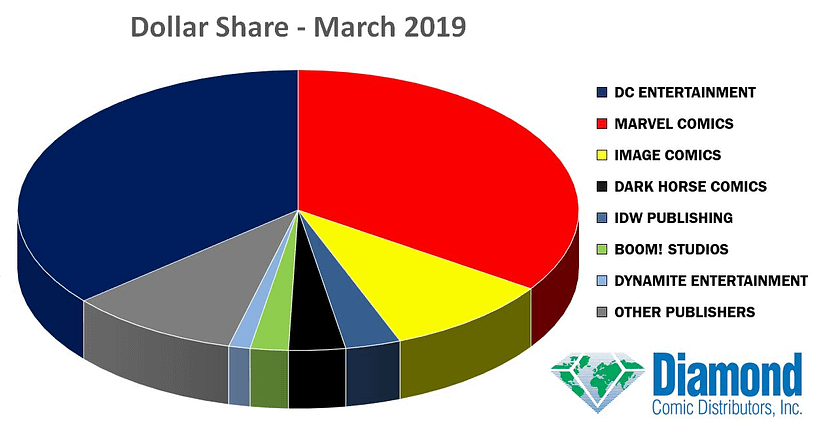