Here's the trick to Defenders: Beyond #1: Al Ewing and Javier Rodríguez throw enough wrinkles in the "getting the team together" portion of the comic that it reads fresh. An inescapable tarot reading helps introduce the recruits, whether willing or not.

Defenders: Beyond #1 relishes in the fundamentals: Where is the most interesting place a conversation can happen? In this issue, it's Blue Marvel's underwater home. Rodríguez plays off the alien nature of the deep dark sea outside the building against Jack Kirby-esque bright colors and visual bombast inside the building. Ewing and Rodríguez (credited as storytellers) ensure there's always something neat to look at while they put the pieces on the board. My favorite page from the issue is below, a splash page introducing Blue Marvel to new readers while Rodríguez runs wild in the background making a Kirby impression.

And that's enough, at least for now. Ewing's good at cosmic scale stories, and Rodríguez is a versatile artist with a keen eye, reminiscent of Marcos Martin's work. Bottom line: Defenders: Beyond #1 is a #1 that makes me want to read more from this team. If you'd like to be spoiled about who could join the Defenders in a comic with the subtitle Beyond, we host a preview of the issue here. Odds are the reveal won't surprise you, but you never know.

Al Ewing and Javier Rodríguez follow up their acclaimed DEFENDERS: THERE ARE NO RULES series with a new volume and an all-new lineup, including none other than Loki, God of Stories! When Doctor Strange sends a dire warning from beyond the grave, Blue Marvel, America Chavez, Taaia (Galactus' mom!), Tigra and Loki assemble to defend reality itself! Plus, you won't believe who shows up on the final page! 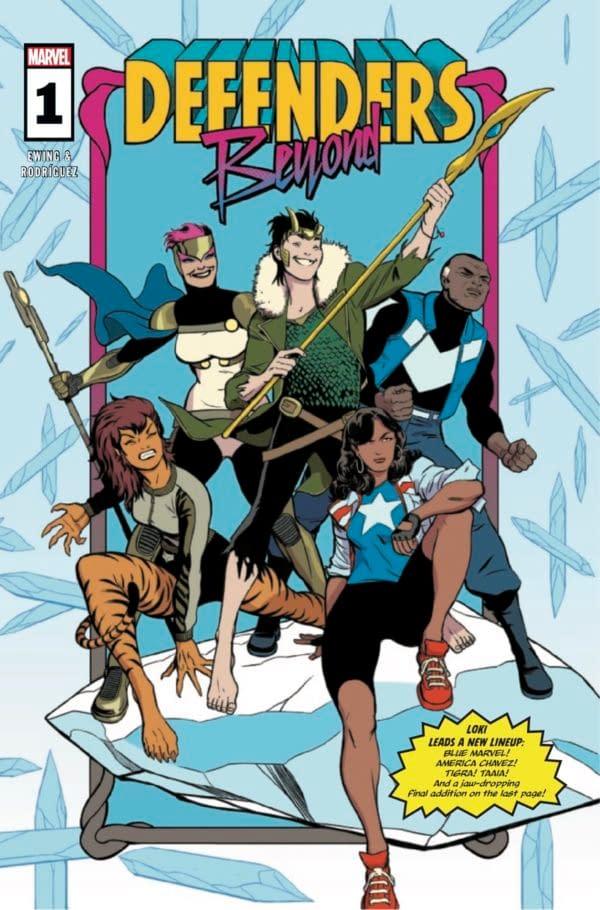 Review by James Hepplewhite
6.5/10
Here’s the trick to Defenders: Beyond #1: Al Ewing and Javier Rodríguez throw enough wrinkles in the “getting the team together” portion of the comic that it reads fresh.
Credits
Storytellers
Al Ewing & Javier Rodríguez
Lettering
Joe Caramagna