James Tynion IV has been writing in his newsletter about how he came up with new Batman character Punchline, and how she was introduced to the comics in a bit of a sporadic fashion.

So, back in December, when discussions were starting about Joker War, I knew I needed Joker to have a lieutenant in that war. A Number Two. We started cooking up the idea of a polar opposite to Harley Quinn, and Jorge designed Punchline. The design was f-cking awesome and I didn't want to wait to use her in a comic.

I had written in some generic gangsters helping out Joker in Hell Arisen #3, so I emailed my editor on that book and said that rather than a generic person in a clown mask, let's slip Punchline in there. 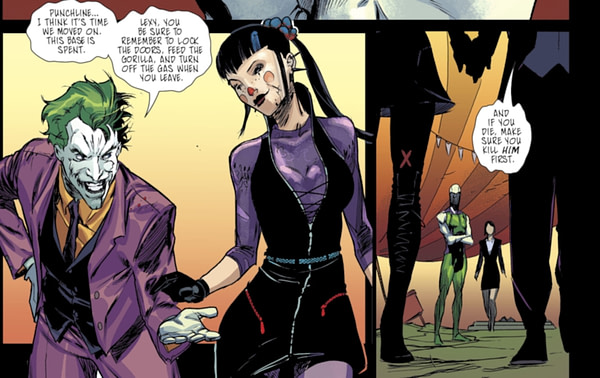 Then I realized that she was going to appear in Hell Arisen #3 a full month before she showed up in Batman, which wasn't going to happen until issue #92. Thanks to the joy of double-ship comics, #89 hadn't been written yet, so I decided to slip her in there, because it felt weird for her to pop up in an event mini that didn't really tie directly into Joker War. 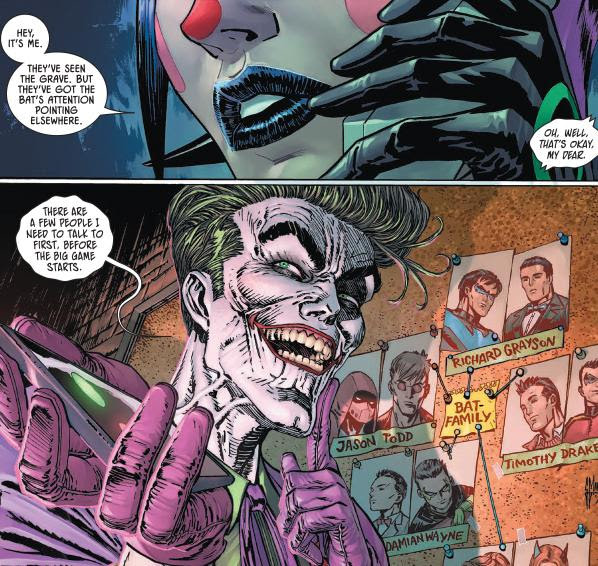 So we snuck her in a couple panels to set her up in Batman first and foremost, in issue 89. Then I got permission to post her design online, and everything went nuts. Books started selling out, and I made the dumb comment that I was excited for her REAL first appearance in 92 (by which I only meant her entering the story and interacting with the other characters), and then folks were saying I was trying to say Hell Arisen wasn't her first appearance, so on and so forth.

The real truth is that new characters don't always equal buzz. I think it's the power of the design, the power of a dark new rival for Harley, and the excitement for a Joker story where readers don't know what's going to happen, because now there are new elements in the mix with the potential to change everything. We weren't expecting it, but we're thrilled it's captured folks attention and interest.

And now the responsibility is on US to make her matter, to make her a character worthy of all that attention.

But honestly, that's what I am MOST excited about with Punchline. It's all the incredible story potential I get to tap into in the book. It's how she changes the dynamic of a massive Joker attack on Gotham City and Batman. It's her first encounter with Harley. Her first encounter with Batman. Her first time on the page interacting directly with The Joker. All of that is why I was excited to create the character in the first place… And I am VERY VERY excited for you all to read her origin story in the Joker 80th Anniversary special. Mikel Janín knocked it out of the park. (Don't tell anybody I showed you this…)

And I promise, in the future, we'll be more upfront when we're about to introduce someone new we think is really cool.

Jorge and I just created a new character named CLOWNHUNTER, who shows up in Batman #96, part two of Joker War. I am very, very, very excited about him, and the absolutely brutal wrench he's going to throw into the mix of that story.