Legion Of X #1, a police story set on Krakoa, was delayed to May 25th, 2022. On May 24th, 2022, there was a school shooting in the United States where police twiddled their thumbs while students died.

Inauspicious is the word. A dreadful sense of timing might be a better phrase.

So that's another Si Spurrier comic drawing dead. It's not a bad one. On any other week, Legion Of X #1 would be perfectly palatable: The setting and pitch allow Spurrier to engage with ideas like justice, faith, and the ability for people to change while maintaining the opportunity for a cool mutant fight if it feels like the audience needs it. This week it's tough to read, even if it hits all the right notes for fans of Spurrier's X-Men bibliography. Did you miss Blindfold? She's back! Did you miss Legion? He's back! Did you miss a scene at a pub? It's there.

Jan Bazaluda's work isn't bad; at its high points, it is reminiscent of Olivier Coipel, and Federico Blee's colors are given the opportunity to flourish, especially in the mind space portions of the comic. Blee's bright colors in the mind space portions are dazzling, and Bazaluda's asked to draw alien creatures, which she does especially well. No design is too ridiculous or ill-fitting.

There's no other way to put it: Legion Of X #1 arrives at the wrong time because of issues out of its control. Marvel, allegedly, is the world outside your window, and the disconnect between it and reality is too much to bear this week.

SI SPURRIER AND JAN BAZALDUA BRING PEACE, LOVE AND JUSTICE TO KRAKOA! Krakoa has its laws – but does it have justice? To remain a mutant sanctuary, Krakoa must safeguard itself against those who would damage its peace or traumatize its people. The lost must be found, and the wicked must face redemption – or retribution. It's up to the ever-soulful swashbuckler NIGHTCRAWLER to keep the spark alive and LEGION to host his unique team in the psychedelic mindspace called THE ALTAR. With PIXIE on point, JUGGERNAUT as a one-man riot squad and a host of X-favorites on the beat, the LEGION OF X will do anything to protect mutants' right to pursue happiness and hope. Kicking off with a hunt for a missing Arakkii god and a skinjacker possessing innocent mutants, read this issue and come meet WEAPONLESS ZSEN, ORA SERRATA…and a villain worth praying for. The DESTINY OF X bares it heart and soul right here! 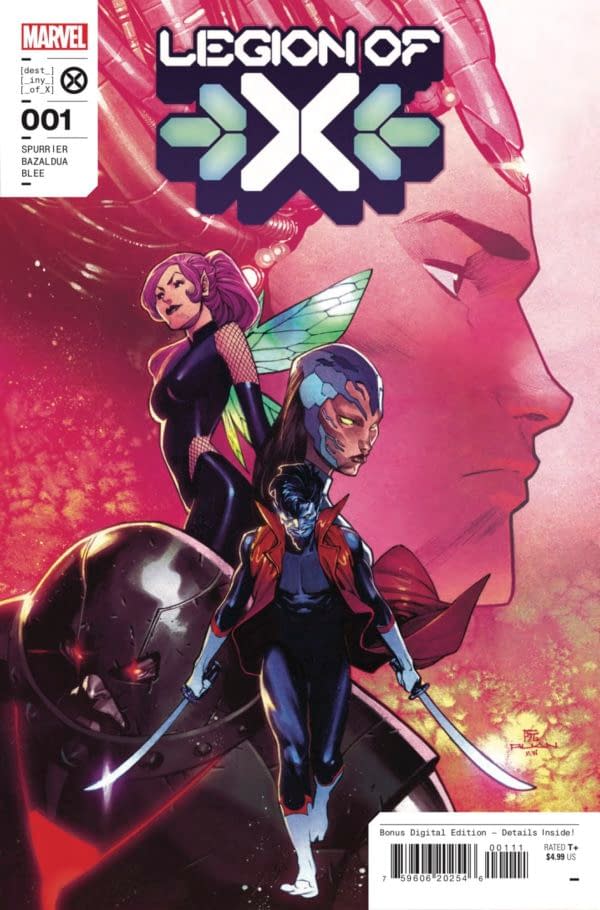 Review by James Hepplewhite
4/10
There's no other way to put it: Legion Of X #1 arrives at the wrong time because of issues out of its control.
Credits
Writer
Si Spurrier
Artist
Jan Bazaluda
Colorist
Frederico Blee
Letters
Clayton Cowles

Dave Sim has, in recent years, taken his highly regarded 300-issue Cerebus graphic novel and transformed it into the ridiculed-then-mostly-ignored Cerebus

Tom Palmer Sr, Inker Extraordinaire, Dies At The Age Of 81

The following was posted by Tom Palmer Jr's Facebook page, regarding the death of his father, yesterday. "We are very sad to share the news that legendary

DC Comics relaunches the Justice Society Of America and Stargirl, with Geoff Johns as well as WildCATS and Wildstorm in November, while finally publishing

It's not just Batman and the Joker that get the Marc Silvestri treatment in November, Dynamite launches Cherish with character designed by Silvestri, as