Marvel Comics will announce their full January 2020 solicitations next week, but as ever, we just can't wait, so have Frankensteined a few of them together, nice and early.

IMMORTAL HULK: THE THRESHING PLACE #1
JEFF LEMIRE (W) • MIKE DEL MUNDO (A/C)
TWO OF COMICS' MOST IMAGINATIVE TALENTS UNITE FOR A HULK TALE LIKE NONE OTHER!
There's a monster raging in America's heartland – and it's not the Hulk. When a young girl goes missing on a Kansas farm, Bruce Banner gets the itch – the one that tells him gamma is on the loose. But this town doesn't take kindly to strangers – especially the big, green, violent kind. Can the Hulk save a child before it's too late, or is he about to take the blame for another massacre?

X-FACTOR #1
(W) Leah Williams (A) David Baldeón
MUTANTS HAVE CONQUERED DEATH!
By the grace of The Five, the resurrection protocols can bring back any fallen mutant. But such a huge enterprise isn't without its problems and complications… When a mutant dies, X–Factor is there to investigate how and why to keep the rules of reincarnation. Writer Leah Williams (AMAZING MARY JANE, X–TREMISTS) and artist David Baldeón (DOMINO, WEB WARRIORS) take Northstar, Polaris, Prodigy, Eye-boy, Daken and Prestige into the world of murder and missing persons…

THE UNIVERSAL GATEWAY TO THE HOUSE OF IDEAS! "I tried to read it, but I just got lost." This HAS happened to you, True Believer! You hand your intelligent friend a comic book, eagerly anticipating future conversation, only to have it returned months later, half read. What went wrong? Comics can be like a foreign language—if you don't learn them young, you might need extra help and motivation to catch on. Other clever cartoonists and scribes have shared their theories of the grammar of comics, but it's never before been done in the Mighty Marvel Manner! Well, get ready, because Mysterio has trapped your Friendly Neighborhood Spider-Man in a comic book, and he's going to help you navigate through the gutters, balloons, panels, pencils and more so you can follow along while he figures out how to escape and save the day! From writer Christopher Hastings (UNBELIEVABLE GWENPOOL) and artist Scott Koblish (DEADPOOL), two artists who know the rules well enough to break them, comes your all-purpose guide to reading comics AND understanding how they work, hidden in an in-universe story you won't want to miss! For the totally green, it's a welcome mat; for the seasoned reader, a peek under the hood. Can we pull it off?! There's only one way to find out!

TASKMASTER #1 WRITTEN BY JED MACKAY WITH ART BY ALESSANDRO VITTI AND COVER BY VALERIO GIANGIORDANO
TASKMASTER HAS MURDERED MARIA HILL!

Or at least that's what the whole world thinks. Now the greatest spies in the business are hunting him down and won't stop until Taskmaster is dead or clears his own name! Follow JED MACKAY (BLACK CAT) and ALESSANDRO VITTI (SECRET WARRIORS) on a globe–spanning adventure that will send ripples through every corner of the Marvel Universe's espionage community!

WIDOWMAKERS: RED GUARDIAN AND YELENA BELOVA #1 WRITTEN BY DEVIN GRAYSON WITH ART BY MICHELE BANDINI AND COVER BY MIKE MCKONE
Devin Grayson, one of the creators of Yelena Belova — the Red Room recruit who once nearly killed Natasha Romanoff — returns with a brand–new story drawn by rising star Michele Bandini!

Yelena has spent years trying to figure out who she is. Once she thought the Black Widow mantle was her destiny, but fate had other plans. Now the past is catching up with her — and with Alexi Shostakov, a.k.a. the Red Guardian! Alexi has worn many titles, including husband to Natasha, but while the Widow played her avenging games, the Red Guardian waited in the shadows. Now a new day is dawning — and this time, no one will stand in his way.

DEADPOOL #6 WRITTEN BY KELLY THOMPSON WITH ART BY KEVIN LIBRANDA AND COVER BY GREG LAND
DEADPOOL INVADES THE X-MEN!

When the X-Men won't return Deadpool's calls for a Krakoa portal on Monster Island, Wade decides to drop by for a visit. Apparently, the new X-Men home isn't taking visitors. RUDE.

It's an entire nation of biological weapons and mutant warriors versus a merc with a mouth. GAME ON!

BLACK WIDOW: WIDOW'S STING #1 WRITTEN BY RALPH MACCHIO WITH ART BY SIMONE BUONFANTINO AND COVER BY EMA LUPPACHINO
Something's stirring in the criminal underworld. Maggia boss SILVERMANE is making his move. S.H.I.E.L.D. has sent an agent in to investigate, but they've disappeared. It's time to call in the heavy hitters. It's time to call in the BLACK WIDOW. And the plan NATASHA ROMANOFF will uncover is far deadlier than any of them realized.

Don't miss this all–new tale from the dangerous, deep–cover days of the Black Widow!

by Jim Zub and Carlos Magno, with a cover by Steve McNiven,

Empyre is all about an intergalactic threat targeting Earth, battling our heroes on multiple fronts, putting them on the defensive while the world hangs in the balance. EMPYRE: AVENGERS showcases three important conflicts with an eclectic group of Avengers, some who we haven't seen as part of Earth's Mightiest Heroes in quite a while. The Savage Land is one of the main locations for this tie-in and that brings Ka-Zar and Shanna the She-Devil into the mix as well. Jungle action, heroic reunions, and big surprises. That's what EMPYRE: AVENGERS is all about.

In 1982, writer Chris Claremont was in the midst of his legendary run on UNCANNY X-MEN, changing the comic landscape forever and creating a new standard for super hero stories! A wealth of ideas, Claremont's brilliance wasn't contained to the main title alone, and he joined forces with industry giant Brent Anderson in MARVEL GRAPHIC NOVEL #5, a special edition issue titled God Loves, Man Kills. This groundbreaking story saw the X-Men teaming up with their bitter enemy, Magneto, against an adversary threatening mutantkind in the name of God. This past year, Marvel celebrated Chris Claremont's 50 years of contributions to Marvel Comics, and we are honored to present an all-new edition of one of his landmark stories this April!

A FINAL BATTLE NO ONE SAW COMING…

Writers Al Ewing, Dan Slott and Valerito Schiti bring you 2020's earth-shattering event, EMPYRE! In preparation for this monumental addition to the Marvel Mythos, we've been revisiting the classic stories that have led up to it. In four stunning teasers, the industry's top artists have reenvisioned events such as the Kree-Skrull War and its aftermath, the Celestial Madonna Saga, and of course, the story of Kree-Skrull born Teddy Altman, also known as the Young Avenger Hulkling and now, we are proud to present the glorious cover to EMPYRE #1 by Jim Cheung! 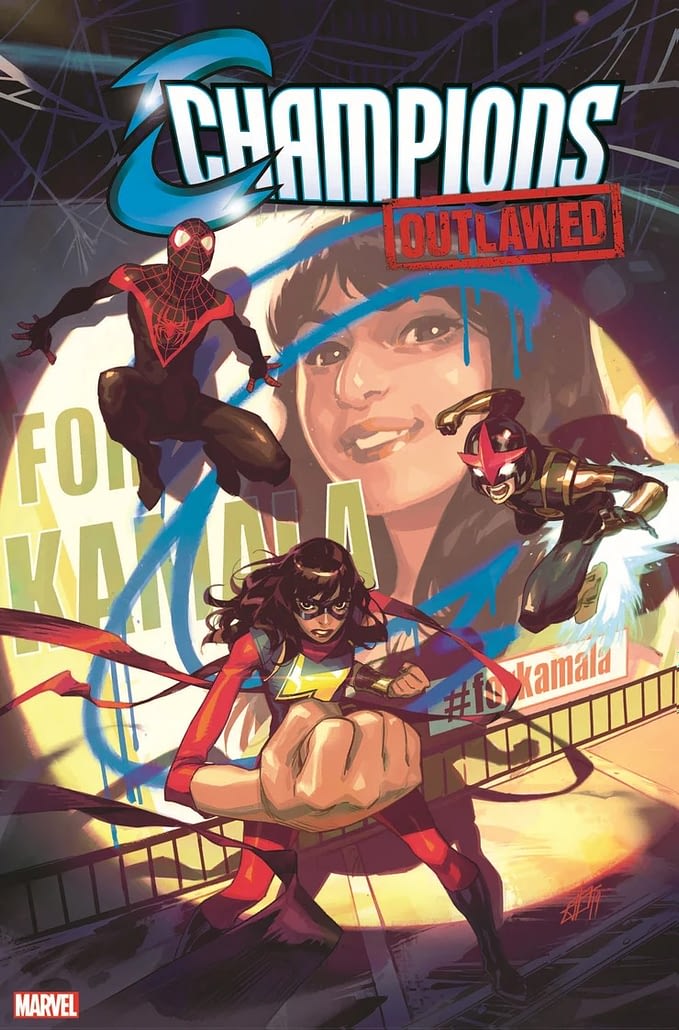 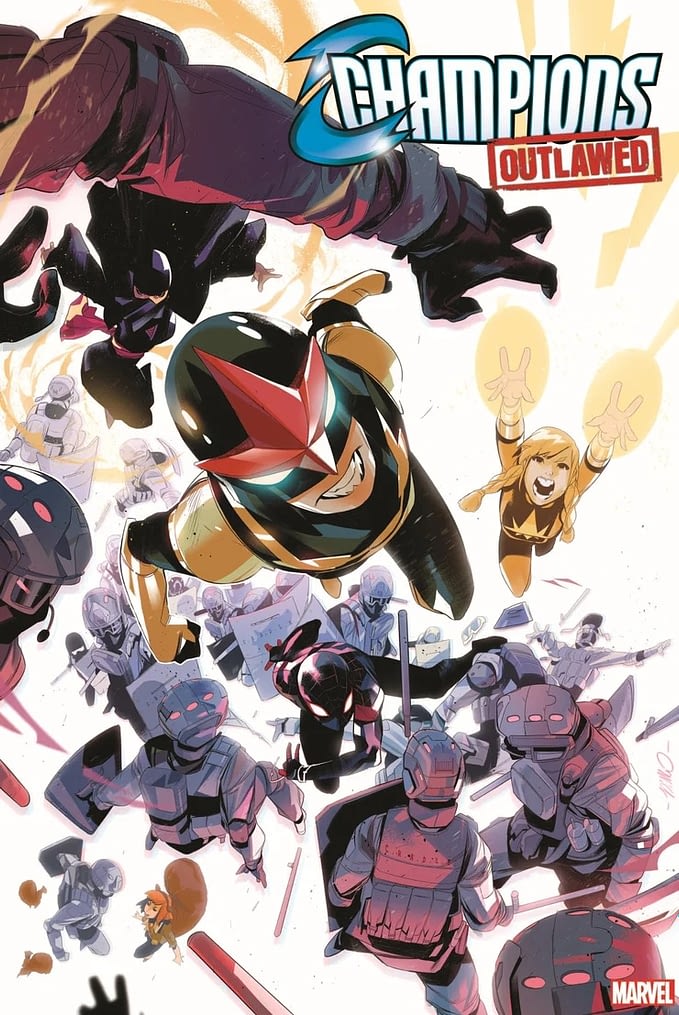 THE CHAMPIONS RETURN IN TROUBLED TIMES! A law is passed that goes against everything Ms. Marvel, Nova and Spider–Man founded the Champions for…But the world still needs heroes, even if the world doesn't want them right now. After Ms. Marvel makes an unexpected and emotional announcement that her team won't go down without a fight, a group of teen vigilantes gathers to plan their next move. But the C.R.A.D.L.E. task force is hot on their trail, and there's a spy in their midst… Eve L. Ewing (IRONHEART, OUTLAWED) and Simone Di Meo (IMMORTAL HULK: THE BEST DEFENSE and VENOM: ACTS OF EVIL) team up for a dramatic new era of Champions that will define Marvel's teen heroes for years to come! 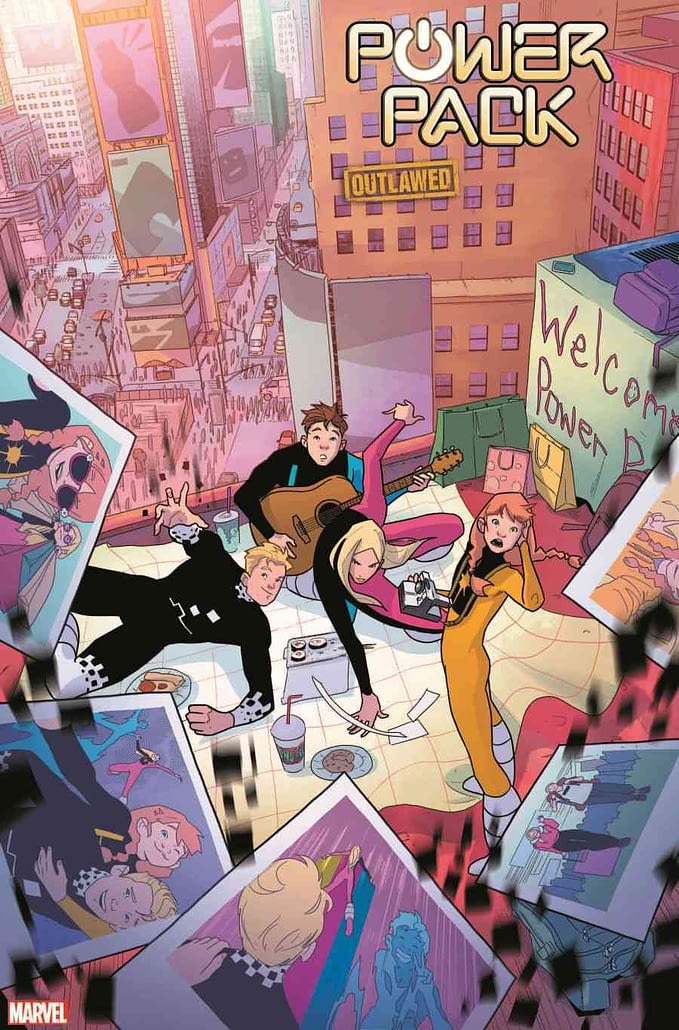 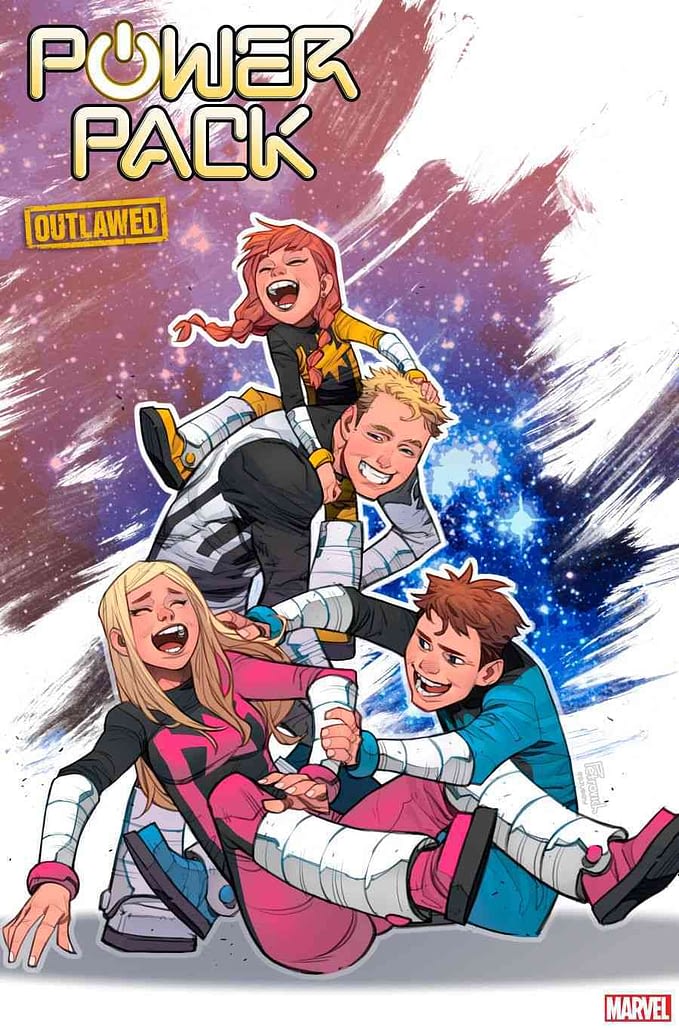 Power Pack is back! Katie, Julie, Jack and Alex Power have been super-heroing since they were learning to tie their own shoes. It's been ages since they fought side by side as a family, but a special occasion — and an old grudge — is about to put the gang back together. There's just one teeny tiny hiccup: a brand–new law restricting underage super heroes! But surely, if the fate of all New York City is at stake, the powers that be will make an exception? Keep your fingers crossed as the Power siblings fight for their right to save the world! 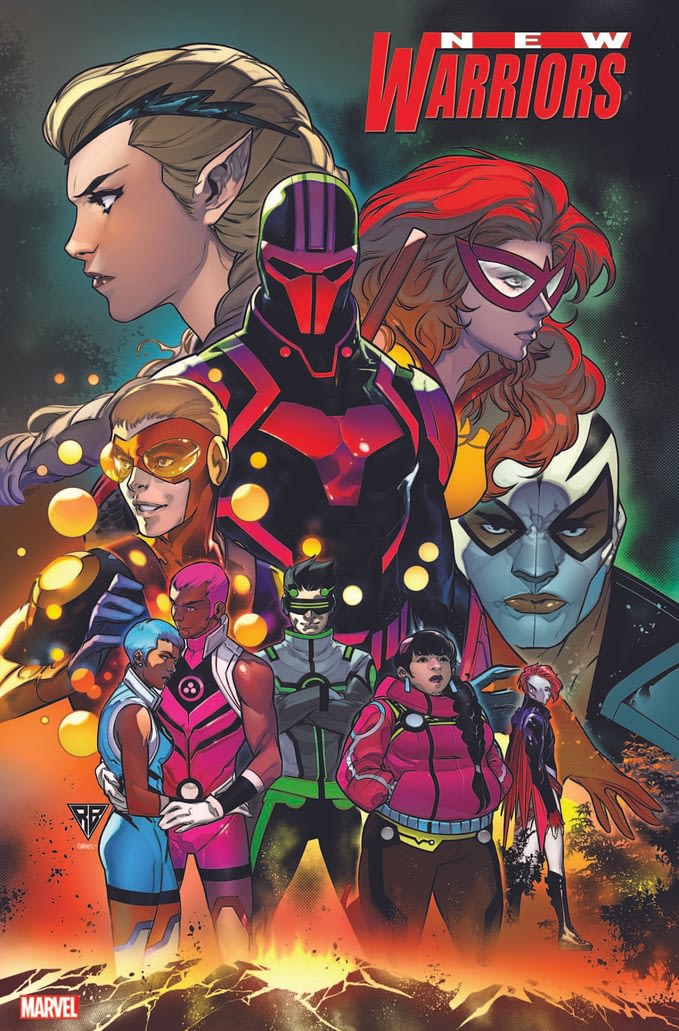 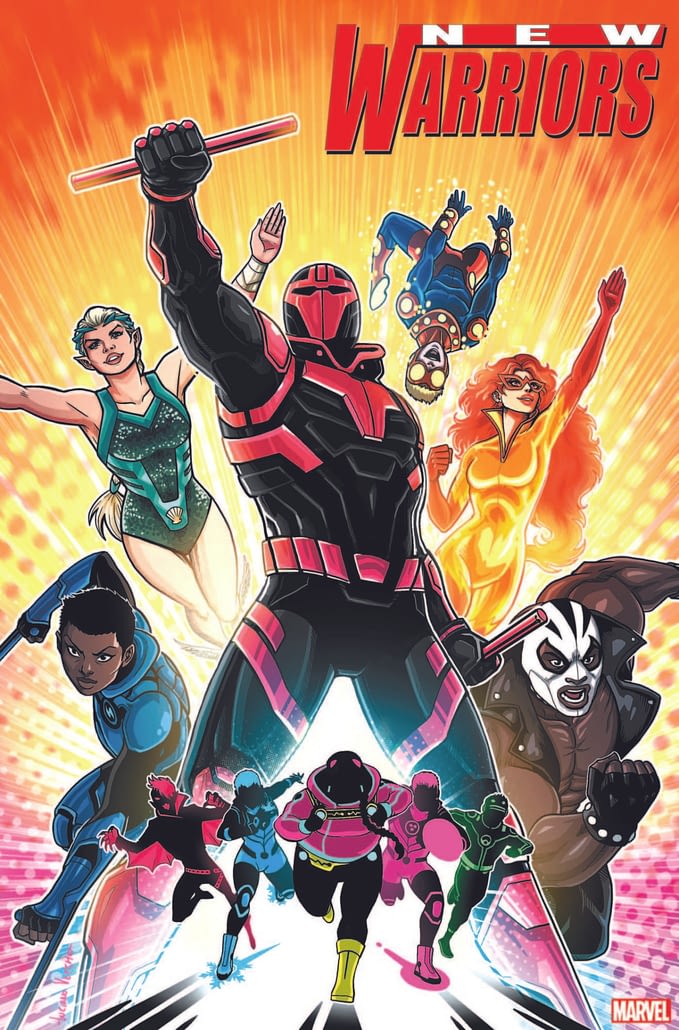 It's tough out there for a teen hero. Without giving too much away, the New Warriors have chosen a side, and they're recruiting unaffiliated new New Warriors to come in from the cold and get proper hero training. So we get to see all our old favorite buddies, but also a new team of heroes that we want to feel as modern and immediate as the New Warriors felt in 1990, when they're literally bursting through old comics on their first cover as if to say, "Throw these old comics in the trash where they belong, it is the '90s now."

There you go folks, more to come I'm sure. But what of Storm and X-Corps ?