This is the cover to Champions #3. Which, deals with the fallout of Champions #2. 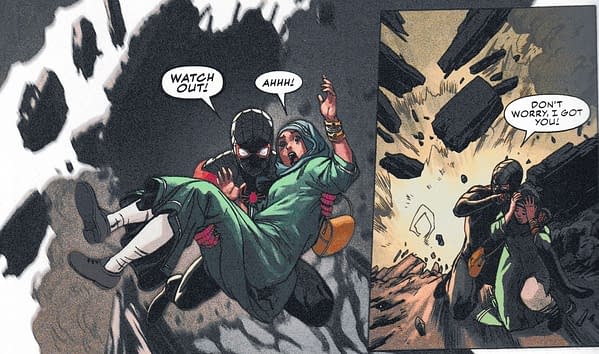 ….wiped out saving another life he had previously saved.

And in Champions #3 is now in communion with Mephisto as a result.

Better thwipp up a long spoon, Miles. But the weirdest thing for me is that the cover featuring Ms Marvel, presumably after discovering what Miles Morales did, saving her but dooming another (odds are she would have saved the world in ten year's time or somesuch), does not happen in this issue.

There is a confrontation, but the information that might ilicit this response is not transferred. Yet. It looks like this cover might have jumped the gun, more suitable for April's issue.

Which actually looks like it could be more suitable for Champions #3, given Miles and Mephisto's back-and-forth.

Was there a switch? You be the judge…

CHAMPIONS #3
(W) Jim Zub (A) Steven Cummings (CA) Aaron Kim Jacinto
• The ultimate sacrifice or the ultimate betrayal?
•  Ms. Marvel will find out the truth, even if it kills her…
•  Jim Zub (AVENGERS, UNCANNY AVENGERS) and Steven Cummings (Wayward, Legends of the Dark Knight) take the Champions into new territory, and the team will never be the same.
Rated T+In Shops: Mar 06, 2019 SRP: $3.99