With an overlay of magic and a heavy dose of personal tragedy, Rise of the Djinn #1 introduces a hardscrabble police detective to a much more unpredictable world hiding under the veneer of normalcy. This issue never lets its foot off the gas pedal and delivers a thoughtful and interesting take on a person taking on an extraordinary fight while losing their innocence.

Detective Tamara Brazile is having a pretty awful time. Trauma on top of tragedy haunts her every step as a serial killer named Koren Massey stalks the city. Her husband falls under the killer's blade; then, she gets diagnosed with terminal cancer as well. While this happens, she begins to doubt her own sanity, seeing "horrid creatures, sometimes with blue and ash-gray skin covered in tattoos." Horrible injuries, terrible circumstances, all of them fail to extinguish the determination and focus of Brazile to stop Massey.

Writer Kevin Grevioux delivers on characterization here as we get in-depth depictions of her grief, her rage, and her frustration. The artwork from Elmo Bondoc, Jorge Cortes, and Taylor Esposito is enormously enjoyable, making Brazile a fully realized character with competence, skill, and attractiveness without being exploitative. Likewise, they do some great things — there's a graffiti-filled panel that's poster-worthy and that's worth seeing.

The criticism here is the magical overlay. There is a war between ancient, magical beings and this issue does very little to explain its stakes, origins, or rationales. Likewise, the supporting characters share none of the depth or nuance of the lead, making them passive bystanders.

There's a lot to like about this book, and when it's one day part of a collection, this may stand a little stronger. As for now, it's moving at high speeds, but the limp is noticeable. RATING: HONORABLE MENTION.

Rise of the Djinn #1
By Kevin Grevioux, Elmo Bondoc
Things couldn't be worse for Tamara Brazile. A highly decorated and venerable police detective with almost fifteen years of experience on the job, her world comes crashing down around her when her husband is murdered at the hands of a serial killer she had been pursuing. And to make matters worse, she is diagnosed with Stage IV for breast cancer before she has a chance to bring the killer to justice. But as fate would have it, she is given a second chance at life when she discovers that she is a descendant of an ancient race of DJINN (genies), with the power to cure herself and others. However, there is a catch: She can only keep the power so long as she aids a pair of evil djinn bring an ancient djinn named Arghan back to life to aid them in a coming war amongst the other djinn of the world.
A war which could usher in an age of misery and strife for mankind.

Rise of the Djinn #1 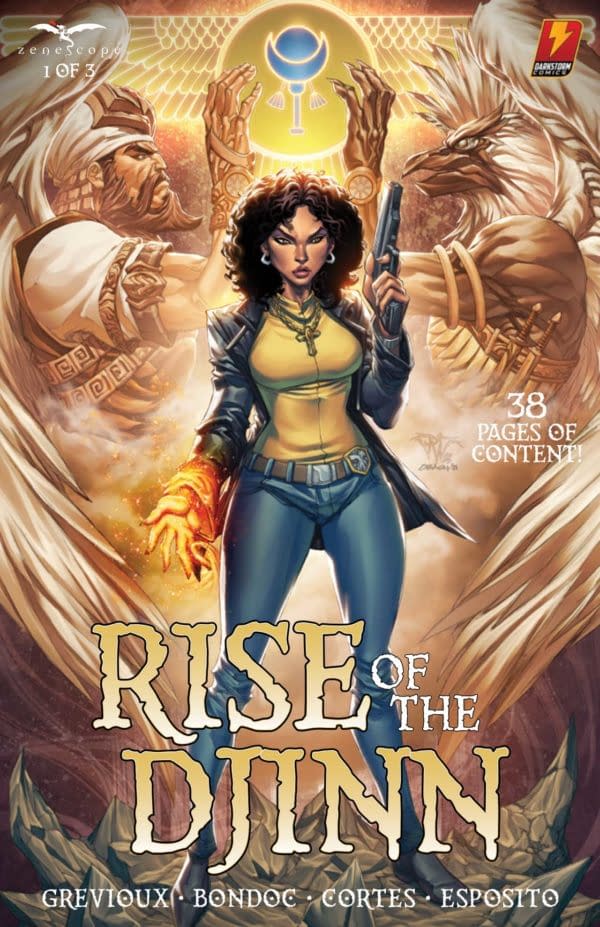