Licorice Pizza features some genuinely stunning breakout performances from its two lead actors, but the movie as a whole fails to come together and really fumbles the ending.

Director: Paul Thomas Anderson
Summary: The story of Alana Kane and Gary Valentine growing up, running around, and going through the treacherous navigation of first love in the San Fernando Valley, 1973.

WARNING: THIS REVIEW WILL CONTAIN SPOILERS BECAUSE THE FILM'S FINAL MOMENTS WERE THE MOMENTS THAT TRULY FELL APART FOR ME. PLEASE DO NOT READ MORE IF YOU DO NOT WANT TO BE SPOILED. Licorice Pizza: 7.5/10

There are really only two ways to approach it when it comes to movies about the "good old days." There are point A to point B stories with a definitive beginning, middle, and end, and then there are movies which contain snapshots and vignettes into someone's life. One is not better than the other, and whether or not that kind of movie appeals to you will likely come down to personal choice. Even when you watch something that chooses a structure that doesn't really work for you, sometimes the people behind or in front of the camera do such a good job that you forget that this really isn't your thing. This is what Licorice Pizza comes very close to doing. The main reason why this movie works at all comes down to its two leads; Alana Haim and Cooper Hoffman. Haim, in particular, is putting in one of those performances that are going to cause studios to just blow up her phone with offers in the coming weeks. Should she get an awards nomination, and she very much deserves one, so expect to see a lot more of Haim in the coming years. She plays Alana in a way that will speak to a lot of those who went into a portion of our mid-twenties lost and unable to find purpose. You try different things, make a lot of stupid mistakes, and ultimately you're supposed to learn and grow from that [more on that later].

Hoffman is just as good as Haim. The son of the late great Phillip Seymour Hoffman, it seems that talent really is passed down through the generations sometimes. Hoffman plays Gary as this cocky for no real reason teenager who thinks he has the world figured out and somehow manages to convince people that he's that charismatic. Hoffman pulls this off by being that charismatic and compelling on screen. You are drawn to Gary, and you understand what he's going through. Like most teenagers, he's trying to figure out who he wants to be and thinks that becoming successful will make everyone treat him like the adult he feels like he already is [despite being fifteen]. We all had a moment in our teenage years where we thought, for sure, that we were on the same level as adults, and Hoffman captures that mentality. Part of growing up, you're supposed to realize that you aren't an adult, you don't have it together, and that fantasy you have is probably not based on reality [more on that later].

Haim and Hoffman are joined by a supporting cast that includes Haim's actual family, which is almost jarring to see on screen. They all look alike, and generally, in movies, we just sort of accept that families look nothing alike, and this time it's quite obvious that this is a real family. Other standouts include Bradley Cooper doing the best impression of "this man is clearly on cocaine" that you'll see all year. If he had a little more screen time, he'd probably be up for a supporting actor nod, and they might just give it to him regardless. Sean Penn plays a movie star so far up his own ass that it's amazing that we can see his head at all.  As we move through the months of Alana and Gary's lives, we meet more characters played by more recognizable faces. However, the movie never stops and focuses too much on them. They are not the reason we're here, Haim and Hoffman are, and writer/director Paul Thomas Anderson wants to make sure that you don't forget that.

However, to get into why the movie falls apart, we need to talk about the final moments. This is a coming-of-age movie, a movie about growing up, and we learn a hurdle in this relationship right off the bat; Alana is twenty-five while Gary is fifteen. There has already been a lot of talk about this dynamic on Twitter, and, of course, the answer is much more nuanced than "good" or "bad." Licorice Pizza spends 98% of its runtime reminding us that Alana is too old for Gary despite how much they might hang out together; despite how much he pines for her, she is too old for him. She told him that the day they met, and she stuck with it until the movie's final moments. They meet, take each other's hands, and run off into the night. Alana tells Gary that she loves him. We never see them "consummate" the relationship in any way, but Anderson undercuts the concept of growing up by letting Alana and Gary get together in the final moments.

Part of growing up when you're in your twenties is realizing that no one is going to give you the validation you need to move forward in your life. You can seek it from your parents, your romantic partner, your career, and while those things can contribute to that sense of personal validation, you need to find it within yourself. Alana growing would mean that this affirmation she is getting from this teenager is not going to give her the personal validation that she needs, and being with him certainly won't. For Gary, he is living the teenage boy "older woman/younger man" trope, which can get Problematic and is something that does need to be addressed when it comes to boys being groomed by older women. That is not what is happening here. For Gary, growing up means figuring out that the fantasy he is trying to create and putting Alana on this pedestal as the "woman he is going to marry" is not based in reality. Growing up means accepting that the "older woman/younger man" fantasy that he's living in is just that; a fantasy and real growth for both of them would be reaffirming a strong platonic friendship.

By having Alana and Gary get together in the final moments of Licorice Pizza, we see that neither one of them has grown up. Alana is still seeking validation from the teenager who is worshipping her, and Gary is still stuck in a fantasy that won't make him happy in the long run. Anderson wrote and directed 98% of a beautiful and rather entertaining movie, but those final moments make everything that we have just watched meaningless. The only difference between the opening moments of the film and the closing moments is Alana's willingness to give Gary the time of day. We've spent the last two-plus hours watching these two run around, and it all ultimately comes to nothing, and the movie just doesn't come together no matter how good Anderson's writing or directing is or how good the performances are.

Licorice Pizza is probably going to be the favorite movie of some people this year, and there is so much to like. As previously stated, this is one giant movie of great performances. However, a movie cannot be sustained on performance alone if it wants to be a cohesive whole, and this movie is just a cohesive whole. If watching some extremely well-acted moments of someone living in 1970s Los Angeles sounds like your jam, then by all means, go for it. All of the pieces for an excellent movie are on the table; they just don't all fit together quite right in the end. 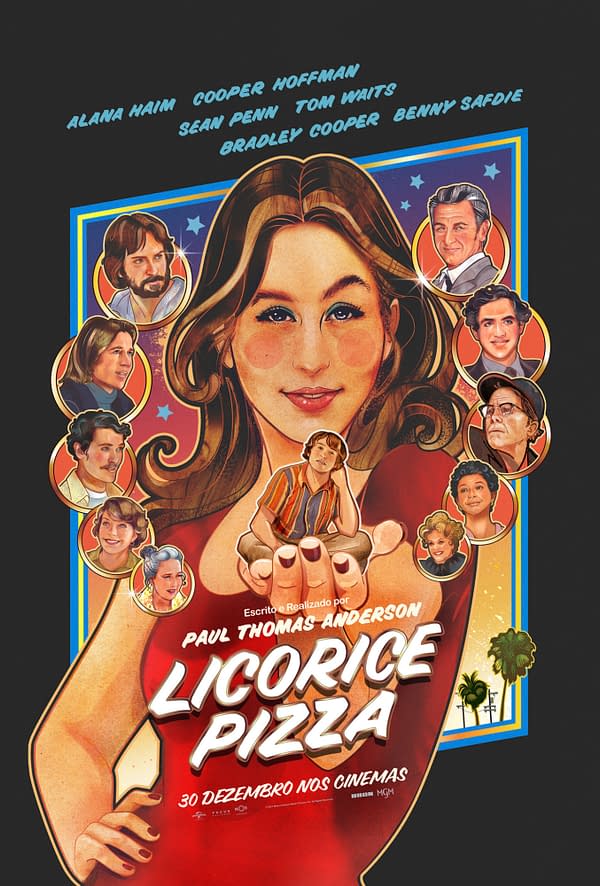 Review by Kaitlyn Booth
7.5/10
Licorice Pizza features some genuinely stunning breakout performances from its two lead actors, but the movie as a whole fails to come together and really fumbles the ending.

Avatar: The Way Of Water is now the fourth highest grossing film ever worldwide, meaning James Cameron owns 3/4 spots in the top 4 himself.

Mia Goth spoke out about the lack of horror nominations at the Academy Awards yet again this year: "A change is necessary"

TMNT Soundtracks Back On Vinyl At Waxwork Records

TMNT fans will want to head over to Waxwork Records and snag the three soundtracks to the live action films before they sell out again.