Lyle, Lyle, Crocodile is far from the worst children's movie, but at the end of the day, it's empty entertainment that carries as much weight as water vapor.

Director: Josh Gordon and Will Speck
Summary: Feature film based on the children's book about a crocodile that lives in New York City.

Something that we never seem to shut up about here at Bleeding Cool when it comes to children's movies is that kids are not stupid; they are not small, dumb adults; they just have a different way of looking at the world. The best kid's movies are the ones that can truly channel that, and they tend to elevate themselves to family movies because they have broad appeal to everyone. There is nothing wrong with being a kid's movie; it just means that it isn't something that will leave much of an impact long term. These movies aren't usually part of core memories for kids. Lyle, Lyle, Crocodile is very much just a kid's movie. It doesn't do much more than show up and serve as entertainment for the hour and forty-six minutes that it is around. The kids will want to get up and sing along, which speaks to how catchy all the music is, but that also implies that this isn't exactly the best movie for a theatrical experience.

As a theatrical experience, Lyle, Lyle, Crocodile is going to be miserable because it has weird pacing issues that will cause kids to get really distracted. The moment something brings their attention back to the movie, it's going to make them want to get up and move. Does that mean the film fails or succeeds at what it is trying to do? It's hard to say; if the intention was to be something kids would want to get up and dance to, then yes, it does succeed.  But this shouldn't have been a theatrical release, a home release makes a lot more sense.  This is almost like making a movie that encourages the kids to try to interact with the screen and then putting it in a theater. That's not what the theatrical experience is or should be, even in a kid's movie. Not every kid likes to see other kids' shoes lighting up because they can't sit still or sing along to the music.

Javier Bardem Does Not Phone This In

In terms of the story, this is pretty typical as far as these sorts of movies go. You need to believe in yourself; confidence is key; you need to let yourself try new things; moving is scary, but you can make new friends, all of the usual suspects. If you're looking for a movie that's going to do something different in terms of story, Lyle, Lyle, Crocodile is not for you. The songs are also done by the same team that did The Greatest Showman, so if you are into those songs, these will be fine. If you aren't fond of that style, the songs become a chore. The songs are also the most awkward part of the entire movie. They are the only way Lyle can communicate, which is pure musical, but the rest of the film isn't a musical. It makes his songs feel very jarring and out of place throughout the entire feature, like he belongs in a Crocodile version of Les Miserables where every word is sung.

The biggest bright spot of the entire feature is Javier Bardem as showman Hector P. Valenti. If you think that Bardem is only doing this movie to get a paycheck and he's here to phone it in, you would be wrong. Bardem is treating this role like he's about to step out onto broadway, and he breathes life into the movie every single time he is on screen. You can feel things get a little brighter and more fun when Hector is in the story, and then they get more conventional and a little more boring when he's gone. It's a shame that he is absent for the latter parts of the first act and well into the second act, but once he returns, so much of the life in the movie returns. His character doesn't exactly go in the direction you think he will, which is a nice thing to see.

Lyle, Lyle, Crocodile is not about to set the world on fire, and even the kids that seek it out when it hits theaters are likely going to forget it by the end of the month. However, as a home release, there is a lot more promise here because the kids will be free to sing and dance their little hearts out without worrying about the social necessities of a movie theater. It's a shame that this movie is so perfect for home release, and it isn't seeing a hybrid release. This actually would have made a fantastic pandemic movie. There are worse ways to pass less than two hours of your life, but unless your kids are desperately begging to see this, there is no rush to see this crocodile. 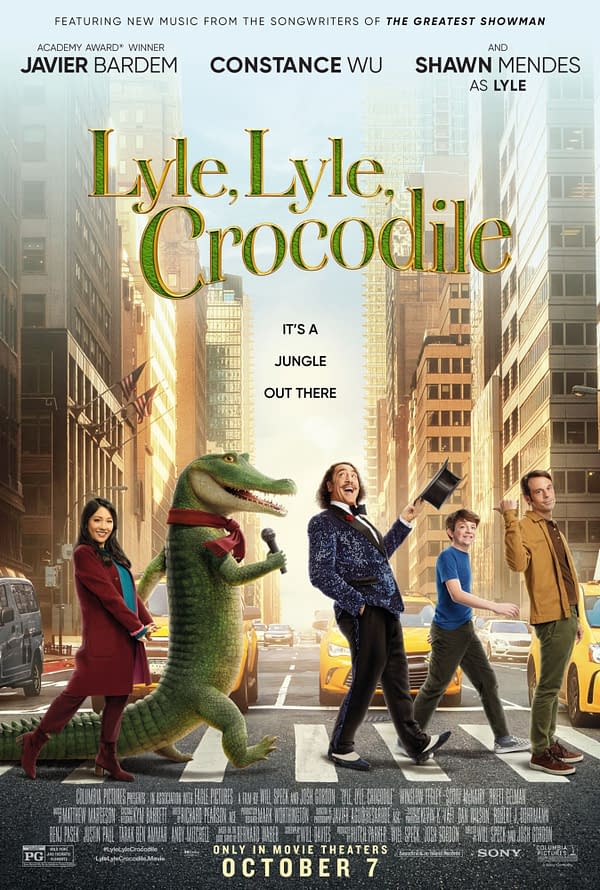 Review by Kaitlyn Booth
5.5/10
Lyle, Lyle, Crocodile is far from the worst children's movie, but at the end of the day, it's empty entertainment that carries as much weight as water vapor.