Space Jam: A New Legacy seems to fundamentally miss what made the first one memorable for an entire generation. Instead, it is Warner Bros. showing off that they own a bunch of different intellectual properties, most of which feel awkward in a kid's movie.

Nostalgia is often blind, and when it comes to the memories a certain generation has about Space Jam, they probably remember the awesome soundtrack [which still holds up, don't @ me] and that one Bill Murray cameo instead of the actual movie. There have been rumors of a reboot for many years now, and it seems that in the age of digital and after something like Ready Player One came out, Warner Bros. decided they could do that with their own IP and save a ton of money on licensing. And that is exactly what SpaceJam: A New Legacy is; Warner Bros. showing off their IPs while LeBron James stands around and tries his absolute best. While James himself hangs the lampshade by saying, "athletes acting never ends well," that doesn't stop James from just not being suited to acting. He's amazing at what he does on the court but trying to translate that to moments with his son or family are so awkward to watch that it's painful at times. When James is in his toon form, it's a little less awkward, but only because we hear how unsuited James is to this instead of seeing it play out on screen.

A lot has been made about the different IPs that have been spotted in the background of this movie made for children. There is an entire montage of Warner Bros. properties where the most kid-friendly thing they reference is still a PG-13 movie. That montage will probably be on youtube by the end of the weekend and is honestly the best part of the entire movie. As for the background characters in Space Jam: A New Legacy, parents should be prepared to explain why there is a scary-looking clown on the Goon side and who those weird-looking ice people in the armor are.

The Looney Toons are still here doing what they do best, but the moment they go 3D and CGI, it starts to look a little weird. There was really no reason for Warner Bros. not to keep them looking like cartoons. It worked for the first one, and there was no reason it couldn't work for the second one. In fact, the contrast in animation between the 2D toons and the 3D villains would have given it a Spider-Man: Into the Spider-Verse [where each of the different Spider-People had their own animation style] type of effect that could have been a lot of fun. There could have been a plethora of 2D versus 3D jokes they could have made that would have been right up the alley of the Looney Toons. Instead, we get this weirdly textured and designed Looney Toons, which almost feels like it's defeating the points of using these classic characters.

Space Jam: A New Legacy is here to cash in not only on the nostalgia of the original but Warner Bros. cashing in on all of the IPs that they own. Disney did the same thing with Ralph Breaks The Internet, and it was just as cringe in that as this is. At least Disney had some continuity because kids can watch all of the characters they see on screen. Space Jam has to grapple with trying to have parents explain why Speedy Gonzalez doing bullet time in The Matrix is something worth watching. Maybe this is a movie that kids will like, and it's just that, a kids movie, and it's fine that movies that aren't trying to be anything more exist. However, the plethora of jokes to R-rated properties makes it seem like Warner Bros. was trying to make a family movie and failed miserably. If the child who sat behind me is anything to go by, after 20 minutes of Space Jam: A New Legacy, they loudly asked if they could go home. And nothing else really needs to be said. 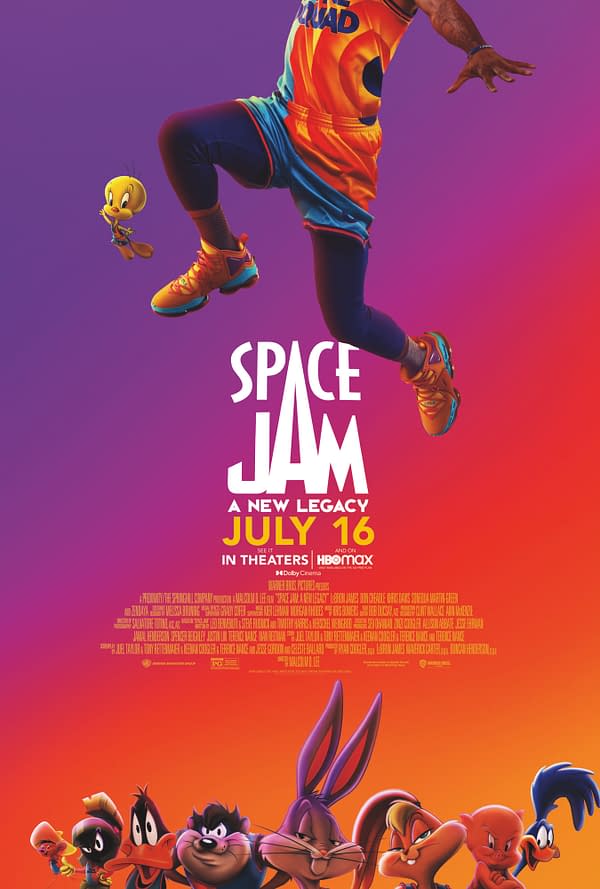 Review by Kaitlyn Booth
2/10
Space Jam: A New Legacy seems to fundamentally miss what made the first one memorable for an entire generation. Instead, it is Warner Bros. showing off that they own a bunch of different intellectual properties, most of which feel awkward in a kid's movie.

Eternals, West Side Story To Have 45-Day Release Windows

Eternals, West Side Story, The Kings Man, and Ron's Gone Wrong will all have 45-day theatrical windows. Encanto will have a 30-day window.

Shang-Chi: Morris and Trevor Slattery Get Their Own Character Posters

Scene stealer Shang-Chi and the Legend of The Ten Rings characters Trevor Slattery and Morris get their own character posters.

Nia DaCosta's Candyman has already made its budget back, and now the film is topping multiple VOD rental charts at the cost of $19.99.

Malignant Producer Hints at Another Upcoming Project with Wan

Tom Hardy recently discussed his hopes for an elaborate Venom-verse in the future after the sequel, Venom: Let There Be Carnage.

Karen Gillan has been doing the interview circuit for the release of her new movie in the UK, Gunpowder Milkshake. But she's also been talking about