[NOTE: I have not watched a single episode of The Sopranos, so I am reviewing The Many Saints of Newark as a standalone entity as much as possible. Please keep that in mind when reading this review.]

The Many Saints of Newark is a pretty good gangster movie that is only hindered by a marketing campaign that is misleading as to who is the main character.

Director: Alan Taylor
Summary: Young Anthony Soprano is growing up in one of the most tumultuous eras in Newark's history, becoming a man just as rival gangsters begin to rise up and challenge the all-powerful DiMeo crime family's hold over the increasingly race-torn city. Caught up in the changing times is the uncle he idolizes, Dickie Moltisanti, who struggles to manage both his professional and personal responsibilities—and whose influence over his impressionable nephew will help make the teenager into the all-powerful mob boss we'll later come to know: Tony Soprano.

The ending of The Sopranos is one of the most hotly debated series endings to a show. There are those that defend it, those that hate it, but it is usually polarizing. Which makes it all the more amusing that creator David Chase decided to do a prequel instead of addressing that ending. However, like most prequels, the moments when it seems to stumble are when it remembers that it needs to be a prequel. The marketing for this movie is setting up Tony Soprano, but Tony is not the main character of this movie, not by a long shot. The main character of The Many Saints of Newark is absolutely Dickie Moltisanti, played by Alessandro Nivola. If you go into this movie knowing that he is the main character, the experience is likely going to be improved. It seems like you're waiting for Tony to become the movie's main character, and you keep waiting and waiting, and then the movie ends.

It's a bit jarring because we get to The Moment that seems to define Tony, but we see none of the fallout. We don't actually see that much of Tony's descent into being someone who could really run a mob. Which is fine if we weren't there to see that, and the prequel parts of the movie become distracting even to someone who might not get the references or someone who has watched the show. Everything gets a little better when the film turns its full focus to Dickie and just how far down the rabbit hole he's willing to go. It's easy to see how he could be a bad influence on someone that is impressionable, even if we don't really see the effects of said bad influence in the movie itself.

When it shifts focus and stops trying extremely hard to be a prequel, the story itself is a decently told mobster movie with all the good and bad that comes with the genre. However, at two hours on the dot, there were times that the pacing felt a bit off toward the end of the second act. There also isn't really much of a three-act structure at all, and things just keep happening and happening until the movie ends. It also covers a pretty extensive time period, several years, and that can make certain segments drag on a bit too much. The violence is brutal without being overly gratuitous save for one scene toward the end that is just hard to look away from, and the camera doesn't look away from it either.

When it comes to the cast, The Many Saints of Newark is absolutely Nivola's movie and he owns every single scene that he's in. He channels that Jersey boy with too much swagger and charm to distract from the fact that he's a maniac. The other notable standout performance goes to Leslie Odom Jr. and even more so in the second half of the movie when he's given the opportunity to really seize control of the scenes that he's in. Jon Bernthal and Vera Farmiga are entirely believable as a set of parents that could produce a mob boss like Tony Soprano, and Michela De Rossi is entirely believable as Giuseppina Moltisanti and getting in way over her head. As a Jersey native, we can confirm that everyone nails the accents and the mannerisms of Jersey for good and for ill.

The Many Saints of Newark likely isn't going to light the mob genre on fire, and it's a bit hard to tell if it is in any way needed to jump into The Sopranos as a show. However, judging it on its own merits and when the movie allows itself to be its own thing, it's a decent mob movie that isn't going to change anyone's life but also isn't a bad time to pass at the movies or while watching at home. Just go in knowing that the main character here is Dickie, not Tony, which should dramatically improve the experience.

The Many Saints of Newark 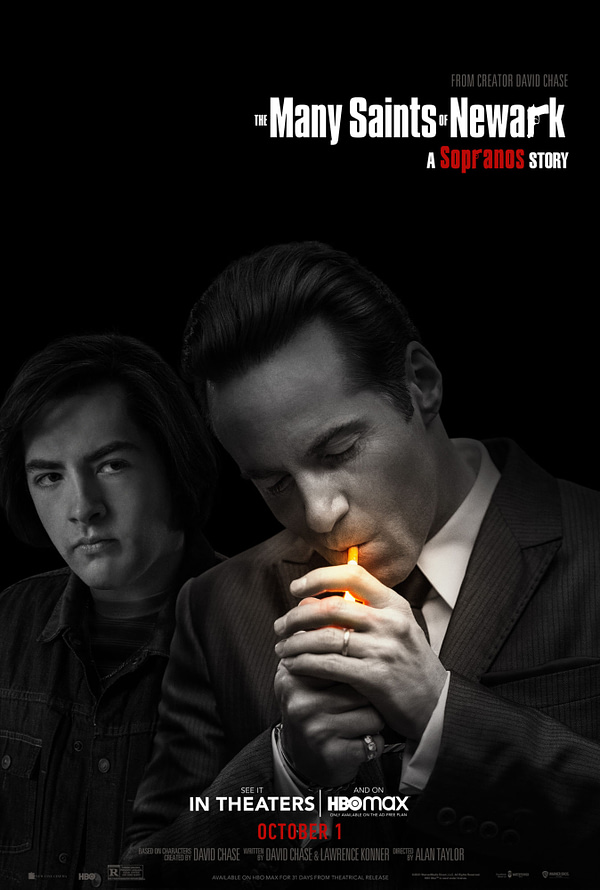 Review by Kaitlyn Booth
6.5/10
The Many Saints of Newark is a pretty good gangster movie that is only hindered by a marketing campaign that is misleading as to who is the main character.

Sony Pictures has dated a new Karate Kid movie, and also shifted the release dates for Kraven the Hunter, Madame Web, and more.

Ravensburger & Disney Lorcana Were The Breakout Stars Of D23 Expo

Ravensburger and Disney Lorcana, the new Disney trading card game set to drop in fall 2023, were absolutely the breakout stars of the D23 Expo.

Don't Worry Darling won the Weekend Box Office with $19.2 million, holding off The Woman King and Avatar for victory in the theaters.

Tony Salvaggio of the Castle of Horror Podcast is in Austin reporting on Fantastic Fest with host Jason on the first batch of new movies.