FOX's Bob's Burgers looked to the crystals for insight in the second episode of their twelfth season. Instead? Nervous sweats and pickling jars filled the air. Don't get me wrong, this is absolutely a positive review from me, I love the chaos. But then again, Mr. Frond didn't need to call me out like that with those anxiety dolls, although I appreciate the sentiment along with a set of them (and the crystal, as Tina did).

The jokes…were hitting the mark again and again in this Bob's Burgers episode. Featured below will be a clip that includes it, but the moments between Tina and Mr. Frond surrounding his failures of dating and texting and her nervous panic-induced sweats (which, honestly SAME) made me honestly laugh out loud. People may think Tina doesn't have the social capacity for great flirting but at least she's not at the levels of Mr. Frond's use of exclamation points. When the crystal that originally helped Tina gets taken by Tammy (who is proving to be a fart of a person this season), Louise and Gene step in and I love seeing that dynamic between the siblings whenever it comes up. Also, I can't get enough of Peter Pescadero's odd dancing and talking that sounds like he can only speak in a very high tone after running a marathon. And poor Ms. Jacobson needs a vacation for like a week straight after dealing with Tammy and Jocelyn's presentation.

Bob presents the restaurant with a selection of disfigured fruit and vegetables from the local market, they were on sale and of course, he can't pass up that bargain. While Teddy is fearful of their appearances, Linda makes hilarious attempts at getting close to him with impressions of the grub, specifically a depressing wrinkly tomato. With a lot of leftovers and an approaching deadline where they can't be eaten anymore, Bob and Linda settle on attempting to pickle what is left. The chaos of the vinegar smell filling the restaurant is of course something that would happen on Bob's Burgers and I'm here for it. It reminds me of when I get started on a project only to realize I'm in too deep with knitting stuff I don't need or deciding I'm into decoupage all of a sudden. Good job, Season 12! You're doing well sweetie! 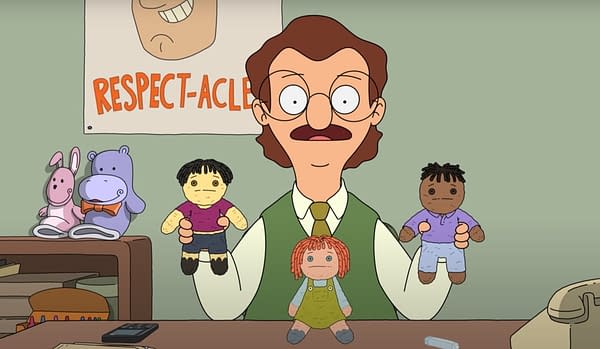 Review by Brittney Bender
9/10
Bob's Burgers brought some of their best jokes and featured some very missed minor characters to their second episode of season 12, one that continues to display some great creative work, making the future look even brighter.
Credits
Network
FOX

CASETiFY and Netflix are collaborating on a Squid Game collection of tech accessories, from phone cases to AirPods in a variety of designs.

A cameo from Guy Fieri in this weekend's episode of FOX's The Great North made Honeybee's dreams come true and left us needing cheese & cake.

FOX's Bob's Burgers had some fun with the history behind the Belcher apartment but made some serious mistakes when it came to Tina's story.

I Love A Mama's Boy Proves When Moms Get Too Close To Sons, It's Weird

TLC's I Love A Mama's Boy offers examples of how "close" can be "too close" for a mother & son, and let's just say it's a whole lot to take.

And That's Why We Drink Podcast Announces "A Haunted Road Atlas"

And That's Why We Drink podcast hosts Em Schulz and Christine Schiefer are sharing details on their May 2022 book, A Haunted Road Atlas.

When The CW's The Flash returns for the remainder of Season 8 in March 2022, Robbie Amell will guest star in a 2-episode storyline arc.

With the series returning in 2022, Netflix announced that Locke & Key star Sherri Saum has been promoted to series regular for Season 3,

With the next horrific chapter hitting tonight, Tabitha learns Pop Tate & Mr. Cypher are old "friends" in a preview for The CW's Riverdale.