Bob's Burgers put on their spooky pants and a very 80's throwback for the third episode of season 12 on FOX's Animation Domination lineup of Halloween story treats. Focused on Linda and Gayle's smashed pumpkin past, this episode was a fun look down memory lane, and had fun with their sister relationship for the series. The Belcher kids had fantastic costume choices as always, from Gene's graduating gladiator to Tina's Sherlock-ness monster, and lastly, the best one in Louise's Peter Pan's Labyrinth.

A favorite beginning part of this episode was in the form of Bob and Linda's dynamic when Gayle came over to the restaurant freaking out about the cryptic letter they both received that signaled someone knew about the smashed pumpkins 27 years ago. Their relationship is hilarious and relatable, it's fun to see how they know each other so well as a couple, and the adorable kiss in the kitchen just added to it all.

While I enjoy a detective-quality moment between Linda and Gayle, it felt like some opportunities were missed, but they almost made it at some points. It felt great to see Gayle included, but I'm not sure a Halloween-centered episode was the best time to do it. I understand putting the focus on other stories instead of it being the kids every season but because it is a fan-favorite time of year, you have got to make anything not focused on them be worth watching entirely. The end moment with the life coach did help Linda and Gayle's story in the end, but it all felt off. I would have loved to see the inclusion of the kids' friends, like Regular-Sized Rudy or Andy & Ollie. This Bob's Burgers episode felt like it didn't belong in the spot it was scheduled. What could have been a great episode outside of Halloween, was sort of forced into what it became. The jokes and details were spot-on as they typically are, but this season's spooky story didn't feel as great as previous ones. I couldn't seem to truly get into this Bob's Burgers episode, but I could see the creative sparks were there, even if in small batches from store signs to minor character's moments.

Episode Store & Van Signs: "Color Me Dead: Paint Your Own Tombstone" with window sign saying: "Going Out Of Business" & "Fly-Day The 13th" 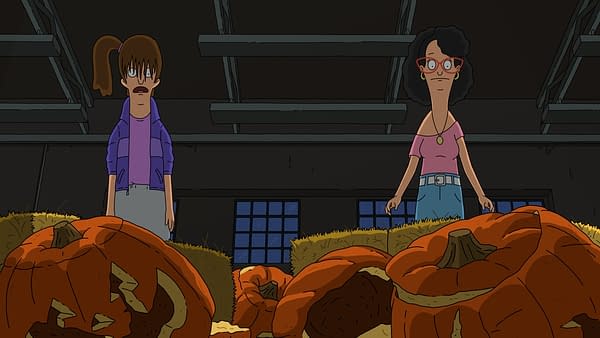 Review by Brittney Bender
7/10
Bob's Burgers put out a fun episode for Halloween this year, but it felt like it didn't belong in the spot it was scheduled. What could have been a great episode outside of Halloween was sort of forced into what it became. The jokes and details were spot-on as they typically are, but this season's spooky story didn't feel quite on par with previous ones.
Credits
Network
FOX

Wednesday Scares Up Big Numbers; Millar, Gough on Season 2 & Beyond