FOX's Bob's Burgers made me cry this week, specifically happy tears, ones that ring true for when you relate to something so intensely you weep. Before I talk about my reasoning for my tears, know that major spoilers are plentiful coming up so if you'd like to catch up on episodes do so first.

Now, why was I crying and what made me change my initial average rating for this Bob's Burgers episode? Bob and a very relatable guest character, Shirley, spoke to me in a deep yet simple way. While Bobs hopes more people show appreciation for his "Burger of the Day", Shirley shows a lot of nerves pertaining to trying out something new for her players as a game master, in what I can assume is a closely related Dungeons and Dragons-style RPG. Shirley has a plan in mind and hopes that turning her players temporarily into goblins doesn't turn them away from being active in the role-playing, and it's only when Bob decides to wisely speak up at the end of their session that my tears came streaming down my face. While I also loved the adorable and realistic struggle Linda, Louise, and Tina had when trying to build a loft bed/desk, it wasn't the story that grabbed me.

As someone who is on that neurodivergent wave of life, Shirley's mannerisms, particularly her pulling back and forth on her hoodie drawstrings, and pretty much most of Bob's Burgers' characters give me a lot of comforts. This episode does a lot for people feeling invisible or belittled because of what they love or find importance in, such as flavor combinations in burgers as a chef or role-playing games. Bob also shows how his character interacts with situations like this, putting together a lot of intention that bypasses his struggle for routine against the players staying late for the game's session. This mixed with how he stood up for Shirley's new attempt in her storytelling was heartfelt. Feeling the words and thinking about what may be personally important to different people, validation can be touch-and-go for those things, making this Bob's Burgers episode highlight the importance of staying true to the beauty in sticking to what you love and allowing yourself to see or try new things that excite you. 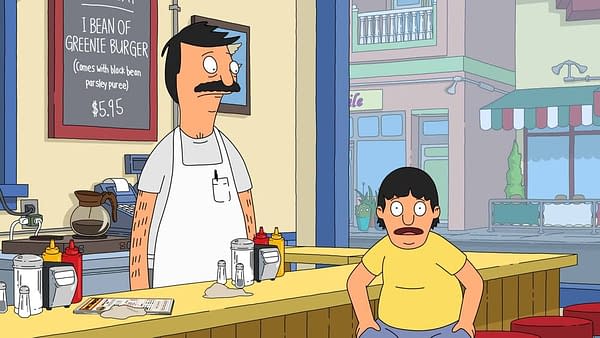 Review by Brittney Bender
10/10
FOX's Bob's Burgers had a stellar story involving personal interests and passion that brought it from being average to being superb in many ways.
Credits
Network
FOX