The beloved Thanksgiving episode of Bob's Burgers has arrived in time for the 2021 holiday season, full of turkey, retirement home shenanigans, and Sergeant Bosco? Yeah, he somehow gets into random episodes and I'm here for it every time. Anyways, if you'd prefer to avoid spoilers before watching "Stuck in the Kitchen with You," turn back now because things won't be spoiler-free after the image jump…

Going to the local retirement home, the Belcher family starts with the simple crafting of paper turkeys but then Bob gets dragged into making Thanksgiving meals for the whole establishment after the married cooks run off to the hospital for the wife's labor. A surprise of great minor characters like Zeke, Zeke's grandma, Sergeant Bosco, and Bosco's mother round out a great episode. Bob in the kitchen with assistance from Louise reminds me of my own experiences making meals with my moms at an Episcopal church we went to years ago. The multitasking and stressful yet satisfying moments revealed a lot more than I thought it would between Bob and Louise.

Weirdly, this episode of Bob's Burgers felt incredibly poignant when it came to family and parenting missteps. I would have loved to have seen Zeke step in with Bob in the kitchen, but it was really well done, the way they went about how Louise and the family felt about Bob's intense fixations that could occur with a Thanksgiving meal, referring to him as "Thanks-zilla". While Bob tries to hold back on controlling everything, Louise has already had enough and purposefully does a bad job. Those moments alongside Zeke, Gene, and Tina's attempts at recreating a parade for the residents make the episode full. Linda and Bob's worries about their kids visiting them when they're old is valid…for some parents, but I think for the Belcher family it works out in a way that won't be the same for other families. Bob's Burgers has a unique view of the conflict that can come out during a time like Thanksgiving and it was really nice to see. 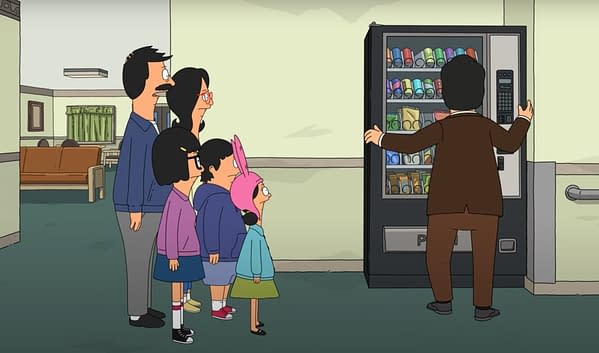 Review by Brittney Bender
9/10
FOX's Bob's Burgers gave us a great Thanksgiving episode with "Stuck in the Kitchen with You", stuffed full of compassion, humor, and hilarious fake parades.
Credits
Network
FOX