Greetings, comrades! It is I, your El Presidente, back to deliver my thoughts on the latest episodes of my favorite trash TV shows. This week's episode of MTV's Double Shot at Love, Season 3 Episode 5, titled "You Didn't Think Angelina Would Show Up," sees the titular Angelina arrive for a visit at the Vegas hotel. But she didn't come alone, comrades!

The elimination happened early this episode, as Kortni was pulled aside by producers and informed that her grandmother was sick, forcing her to leave the show. Vinny empathized, having experienced a similar situation during the original Jersey Shore run. In any case, that left one fewer woman in competition for Vinny's love… but not for long, comrades!

The big guest star in this episode was Angelina, who arrived not alone, but with two "friends" from Staten Island who joined the show as cast members vying for Vinny's love. With the arrival of Angelina and the new girls, the house further splintered into cliques, with Jovanna (who knew Angelina outside of the show) and Peachy joining the Staten Island club, and many of the other existing castmates projecting jealousy over the new girl's arrival, especially Honey and Peyton.

Comrades, take it from a man who is known for having one of the largest harems in the Southern hemisphere: it's never a good idea to introduce new potential wives to your existing potential wives without giving them some kind of warning first. Of course, it will spark divisiveness when you threaten to deprive the ladies of their time with an incredibly handsome dictator… or a Jersey Shore guido. They can't help it. It's that raw sexual magnetism. That, or all the money, fame, and power.

The Thirsty Bitches Get Makeout Sessions

Peachy was the next girl to earn a kiss from Vinny as the two lounged poolside. She would also go on to pull Vinny into her room for a makeout session on the bed later in the episode, much to the chagrin of Danielle, who pointed out, "The thirsty bitches get makeout sessions." Danielle was on a tear in this week's episode, as she also became angry after learning that Vinny fed the same lines about his connection with her to Jovanna, prompting Danielle to pull Vinny for a chat and let him know she felt. Vinny pointed out that he's dating seventeen women at once, which means he's bound to repeat himself, and Danielle did seem to accept that.

Being the bachelor on a dating reality show is a lot like the world of international despotism. You always have to tell little white lies to keep the peace. "Sure, United Nations, the election is going to be free and fair. No, human rights advocacy groups, I would never silence my political opponents by having them arrested. What, American CIA? I can't believe you would accuse me of fostering terrorism." That sort of thing. You say what you need to survive, comrades, in both love and war.

No One Likes Being Picked Last

Also in heated competition this week were Erika D. and Jovanna after Erika chose Jovanna last when the girls chose two teams to compete in a pool race. Jovanna took it personally, especially since Pauly D was egging on the drama with jokes, and the two ended up in a big argument later in the episode (also egged on by Angelina).  Unfortunately, that argument spilled over in front of Vinny, who wasn't impressed with how some of the OG cast members were responding to pressure, and, as Angelina pointed out if the girls can't handle Pauly's joking, maybe they aren't cut out to date the Keto Guido after all. But it was Angelina who ended the episode eliminated, as Vinny decided not to send any of the other girls home this week.

Comrades, a very similar thing happened at the most recent dictator's retreat. We were getting ready to play a game of beach volleyball and Putin and I got to pick the teams. Of course, Trump was there, even though nobody wanted him — what kind of real dictator can't even manage to rig an election properly? Anyway, nobody wanted to pick him, even though he kept muttering things like, "I know more about beach volleyball than Olympic volleyball players" and "a lot of people are really amazed at how good I am at beach volleyball." So of course he ends up last, even after Kim Jong Un, and comrades? He was not happy. He ended up on Putin's team, and he was all like, "thanks, buddy, I knew you would pick me," and Putin was all like, "come on, this guy." Long story short we had to call the whole game off when Trump said his shin splints were bothering him, so let me just say it like it is: not everyone is good at sports.

Whenever you see a Jersey Shore-related show and Angelina is on it, you know you are going to get the drama, and Angelina delivered on Double Shot at Love this week as always. Rifts are forming between the girls, feelings have been caught, and it's only going to escalate from here. Until next week, comrades: socialism or death! 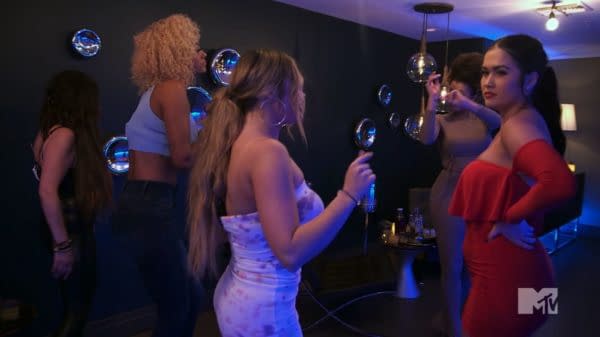 Review by El Presidente
8/10
Whenever you see a Jersey Shore-related show and Angelina is on it, you know you are going to get the drama, and Angelina delivered on Double Shot at Love this week as always. Rifts are forming between the girls, feelings have been caught, and it's only going to escalate from here.