HBO's Landscapers is definitely not what you expect. You might think it's another run-of-the-mill British True Crime thriller about a couple who were arrested for murder, but writer Ed Sinclair and director Will Thorpe turn this 4-part miniseries into an oddball anti-thriller comedy about uncertainty, escaping into fantasy, and the sheer oddness of being British.

Susan and Christopher, played by Olivia Coleman and David Thewlis, start the story by hiding out in Lille, France broke and trying to start a new life, but his French isn't good enough to get a decent job. Susan spends the days playing housewife and spending money on movie posters and memorabilia, putting up a brave face and waiting for things to get better. When Christopher phones his stepmother in England to ask for money, he lets slip that he and Susan buried her parents in their garden, which is why they fled to France. His stepmother reports this to the police, who find the bodies and launch an investigation. Christopher and Susan dutifully return to England to turn themselves in and the rest of the story is not a whodunnit but why. That's when things get sadder and darker but continue to be very strange.

Susan and Christopher are unerringly self-effacing, the latter going so far as to write extremely polite emails to the police about coming back to help them with their inquiries. The two of them are as far from ruthless criminal masterminds as you can get. The police are not genius crimefighters either. They just plod dutifully and hilariously along, bewildered by the Edwards and the sheer strangeness of, well, everything, as if they're just becoming aware of how mysterious Life is. Everyone, both the Edwards and the police, are very British and middle-class doing what they do out of a sense of duty and obligation. If Christopher's stepmother hadn't called the police, and if the Edwards had remained hidden, they would not be in prison. Everyone seems to be driven by extremely developed superegos.

The style of the show reflects Susan's unstable mental state, going from reality to black and white classic movies and romantic French movies, even breaking the 4th wall with characters reciting their lines to the camera and showing that this is all staged and filmed as a TV show. The result is an almost Lynchian comedy of prosaic surrealism. It pushes the mundanity of a British view of the world into something completely off-centre and odd. This isn't so unexpected when you think about director Will Thorpe's track record. Thorpe's works, from Flowers to The Electrical Life of Louis Wain and now Landscapers, have been about damaged people who create a protective fantasy world to live in. The characters in Thorpe's stories are victims of past trauma who lose themselves in a fragile bubble they hide away in with the outside world threatening to smash it and them to pieces.

The Flowers are a family of dysfunctional fantasists with their Japanese tenant, played by Thorpe himself, creating cartoon fantasy worlds in his art to contain his grief over his own family tragedy. Louis Wain, played by Benedict Cumberbatch, is an artist whose declining sanity is expressed through his paintings of cats that become symbols of love and innocence. Susan Edwards copes with her past abuse and the killing of her parents by retreating into a dream world of Hollywood and French movies with her husband Christopher doing his best to shield her from the harshness of the world. For Thorpe's characters, sadness and despair are kept at bay by Art. Art and artistic expression are to be cherished as what redeems us all, especially the most unhappy and wretched of us. Thorpe has quietly become one of the most unique – and uniquely British – directors and storytellers working. To watch Landscapers is to feel like an alien observing the British and noticing just how odd they really are. 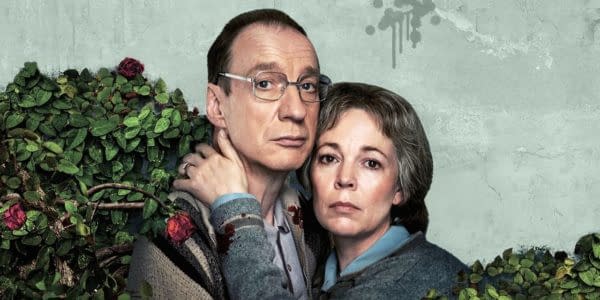 Review by Adi Tantimedh
9/10
HBO's Landscapers is definitely not what you expect. You might think it’s another run-of-the-mill British True Crime thriller about a couple who were arrested for murder, but writer Ed Sinclair and director Will Thorpe turn this 4-part miniseries into an oddball anti-thriller comedy about uncertainty, escaping into fantasy, and the sheer oddness of being British.

Doctor Who is giving the Sixth Doctor's second season a Blu-ray boxset with tons of extras featuring Colin Baker, Nicola Bryant, and more.