Things just keep getting darker with each episode of Motherland: Fort Salem and even got us screaming with the most recent, "My Three Dads". This episode was a wild ride. We finally get some answers and our witches seem to be getting on the right track, but things get cut short and it seems we are about to go to hell even some more. The Spree kinda turns on the military. Oh… and will we end up seeing that our favorite Motherland general might not be the big bad we're being told she is?

We get to see how things are at home for a couple of our witches. After Abigail (Ashley Nicole Williams) declined their offer, Raelle (Taylor Hickson) takes Tally (Jessica Sutton) back home with her. I have to admit, the scenes between Tally and Raelle were my favorite. Their little bonding moments were sweet and reminded me of those first sleepovers with friends where you get to connect on a deeper level. They also get to talk to one of Raelle's mom's old friends and she brings up a very important point after being told how Willa did not show up after being called by the candle. It seems the dead cannot refuse upon a call. Ding ding. I wish she would have said what we were all thinking. Raelle's dad was also incredibly adorable- we live for tear-jerky dad-daughter moments.

Abigail on the other hand had a completely different experience at home. We get to see some of the pressure that comes with being a Bellweather and how strained her relationship is with her mom, Petra (Catherine Lough Haggquist). However, it was her grandmother I fell in love with- she was so badass and pushing Abigail to follow her own fire. I can imagine this will make the relationship between her and Petra even more strained. That said, it was weird to have Abigail sitting with all her possible future husbands. We even got to meet her three dads and that was as awkward as it sounds… Granted, I am a muggle, so I probably would not understand. As always, I love getting deeper dives into the traditions of this world.

Scylla (Amalia Holm) and Anacostia (Demetria McKenney) find out what happened to the parents of the girl they saved and get into an argument over her close future. Needless to say, it does not go well and Scylla pulls one over Anacostia leaving her sleeping and taking the child to the Spree. Willa (Diana Pavlovska) manages to get intel into the child's mind and they find out where the Camarilla has all the kids stored. Unfortunately, they show up too late and the Camarilla has moved them out already. However, it was not for nothing as they manage to discover who they are really after: Raelle.

Turns out they were a bit too late as Raelle and Tally get attacked and Raelle gets taken by the Camarilla. This was pretty heartbreaking and even more so because they seem to have figured out who is behind the Spree. Again, too late as they have launched an attack on General Alder (Lyne Renee). And talk about a twisted one and visually horrific. It really looked painful. It was surprising to see Alder as scared as she looked begging Anacostia to stay by her side. The next episode Motherland: Fort Salem, looks even more horrific showing us that,m in fact, shit is about to hit the fan… or just did… I really want to know where things are heading, but I am not sure if my heart is ready yet. 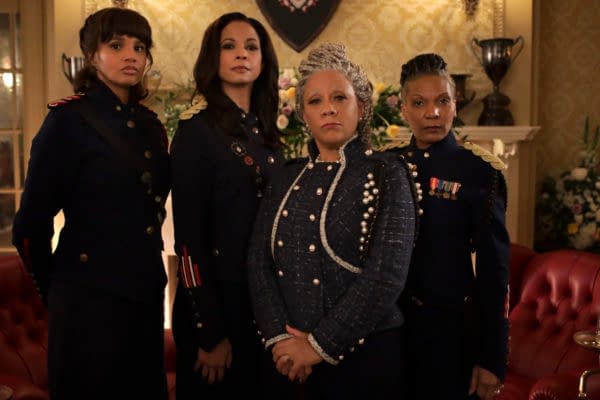 Review by Alejandra Bodden
8/10
Things just keep getting darker with each episode of Freeform's Motherland: Fort Salem and even got us screaming with the most recent episode, "My Three Dads"- a truly wild ride. We finally get some answers and our witches seem to be on the right track, but things get cut short and it seems we are about to dive deeper into some hellish situations.

My Hero Academia S06E08 "League of Villains vs. U.A. Students" was a show of power that brought out every emotion across the spectrum.

Crunchyroll's Chainsaw Man S01E06 "Kill Denji" was a horrifically terrific chapter from its first moments to its final seconds.

This week's Spy x Family episode was another sweet & fun two-for-one deal: "A Revenge Plot Against Desmond" and "Mama Becomes the Wind."

Interview with the Vampire Season 1 Wraps in Bloody Brilliant Style

The finale of Interview with the Vampire impressively wrapped up an already remarkable first season, hitting the right notes along the way.

My Hero Academia Season 6 Ep. 7 Review: Dark Days Ahead for Our Heroes