Throughout episodes three and four of Marvel Studios & Disney+'s  Ms. Marvel, the show does a tough balancing act that many shows and movies have a hard time pulling off. On the one hand, the show has spent the last two episodes explaining everything that is going on. It gives Kamala and the audience a much better idea of not only her cosmic powers but the challenges she will face, and the villains that will ultimately be the final battle in what we can hope isn't a rushed final episode. We learn what she is and how her powers are connected to her cosmic history, and how these powers manifest. We also learn what will set Kamala apart from the djinn and others trying to hurt her. It is unsurprisingly her human nature, but that is the thing about Marvel heroes; they are often rooted in their human nature.

The difference between Marvel and DC in the modern age (at least on the big screen; on the small screen, DC is much better at letting their characters feel more human) is that DC leans into their heroes being modern-day gods while Marvel leans into them just being people with extraordinary powers doing their best. Even Thor, who is about as close to a god as you can get in the Marvel universe, has been rooting his story in humanity from the first movie and learning more and more as time goes on. Kamala's connection to her humanity, the fact that she is essentially mixed-race only with the djinn, is the thing that is going to save her. Ms. Marvel has been exploring this idea of dual identity and being unsure about your connection with your own past, history, and culture from the first episode. The djinn part of the plot is just taking that to a more extreme level.

However, that doesn't mean that the idea of being unsure of your own place and your connection with your culture is rooted only within the subtext of the djinn plotline. Kamala is also struggling with the connection to the past of her human culture, which is something that Ms. Marvel is exploring beautifully. The Partition of India is a part of history that people of that region and those with a connection to it cannot forget. As Aamir says in episode two, "every Pakistani family has a Partition story. And none of them are good." While western audiences might know about this part of history, they don't know the details, and Ms. Marvel has not been shying away from this terrible moment in history. Often, the media either tried to pretend the bad things didn't happen, or they make it the entire focus of the story to make it overly realistic or grim. Ms. Marvel is talking about djinn and alternate realities while also describing the very real horror that people went through.

Ms. Marvel is doing an excellent job of ensuring that it is being respectful of this very real and extreme traumatic thing that hasn't had nearly the amount of media attention that a traumatic thing like the Holocaust has had. There is a connection to the cosmic and greater Marvel universe here. Still, Kamala is mostly learning to find herself and her own identity, which is something all teenagers struggle with but is something that immigrant kids would struggle with even more. [Note: I am a white woman from America, I cannot speak in depth to the thoughts of immigrant kids, but this article from The Ringer by Daniel Chin talks about the disconnect Kamala has from her own history, something a lot of kids from immigrant family's experience, better than I ever could].

That disconnect is something we do see in media but is often presented as some sort of failure of either the kid or the parents, but there doesn't appear to be that here. Kamala is just trying to connect to her past and figure out her place in the world, something we all went through, and her path is relatable regardless of your background. However, her journey will likely hit harder for kids who have experienced this cultural disconnect. Seeing someone else go through the same thing you are and see it presented neutrally is essential.

Throughout this exposition in these two episodes, Ms. Marvel has managed to weave it within the other events in the show. We see Aamir's wedding while learning about the Clandestine, how beautiful that ceremony is, and how much Kamala's family loves each other. While Kamala explores Karachi, meets the Red Daggers, and has a massive car chase, we also see her mother and her grandmother reconnecting and Kamala exploring a side of her history that she hasn't ever seen before. While Kamala might be experiencing cultural disconnect, the show isn't experiencing any disconnect. The exposition is weaved within the greater parts of the story. So even if we have an entire scene dedicated to finding out what's going to happen if the bad guys get the bangle, we also get one of the best ongoing jokes in the Marvel universe, which is "let's make fun of Americans for white-washing everything."

We are heading into the final two episodes of Ms. Marvel, and the infamous Disney+ pacing problem is still lingering on the horizon. At the end of four, we see Kamala has traveled back into the past to the train station and a vision of the Partition. How long is this vision going to last? If it lasts the entire episode, then episode six is going to be yet another sprint to the finish line. Perhaps the vision won't be too long, but this vision could also be one of the best scenes in the entire show and the most moving, so should it be rushed?

Once again, it looks like there is a chance that is another show where they could have used one more episode to slow everything down, but we'll have to see. Perhaps this one will be able to stick the landing; we'll have a better idea of the pacing and if six will be a sprint to the finish line once episode five ends. Then there are the villains, which at this point are still rather one-note. Najma is the only one getting any real significant screen time, but the Damage Control plotline is also the background. Villains have always been the thing Marvel focuses on the least, and if they fall by the wayside to make more room for Kamala's journey, that will make it harder for the ending to feel satisfying but not impossible to pull off. 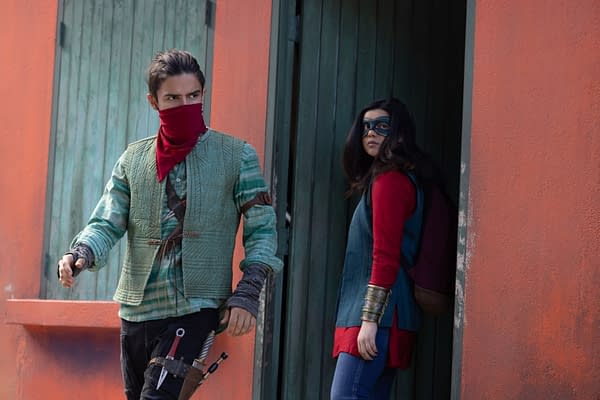 After a rough start, She-Hulk: Attorney at Law finds its footing with the second episode as this show establishes itself as something new.

Based on reports earlier, it appears that HBO Max has pulled approximately 200 episodes of the classic children's show Sesame Street.

The Sandman Star Jenna Coleman on Doctor Who Return: "It Could Happen"

House of the Dragon: GOT Prequel Has Big Fan in WBD CEO David Zaslav

In a memo sent out to the company this morning, Warner Bros Discovery CEO David Zaslav had nothing but love for HBO's House of the Dragon.

With Season 6 less than a month away, Adult Swim's Rick and Morty "Wormageddon" offers a chance to take part in a global, "living" episode.

While in the middle of promoting Netflix's The Sandman on social media, Neil Gaiman confirmed the rumors. He's God... at least, on Lucifer.

Salma Hayek (Eternals) & Annie Murphy (Kevin Can F**k Himself) are reportedly in talks to join the cast of Netflix's Black Mirror Season 6.