Okay, so they can't all be gems. But because we want to kick things off on a positive note, here are some of the things we liked about the Douglas Olsen-directed and James Siciliano-written sixth episode of Season 5, "Rick & Morty's Thanksploitation Spectacular." First, we're suckers for any adventure that finds Dan Harmon and Justin Roiland's dimension-hopping duo working with President Curtis (Keith David)- the trio has a fun, summer action blockbuster vibe that works. For a season that's been visually impressive, this outing stands out when it comes to being some amazing eye candy. And as twisted takes on things go, having FDR fused with a spider as the side effect from polio research was a particularly tasty one (and bonus points for Morty's "fireside chat" line). With that said, we're throwing on the "MAJOR SPOILERS AHEAD!" sign and throwing out a spoiler image buffer before we drop a very large "other shoe."

If we had to put our finger on what went wrong with "Rick & Morty's Thanksploitation Spectacular," it's that it wanted to tackle a whole lot of territory in less than 30 minutes but it lacked a major storyline to pull them all together. On top of that, the themes themselves felt like a ho-hum mashup of previous-season repeats with preaching-to-the-choir perspectives handled better in previous adventures. The United States has a twisted memory when it comes to its own origins? Yup! The government and the scientific/artistic communities don't realize how much they need each other? Okay! Cheesy military speeches like the one from Independence Day are no substitute for the way we treat soldiers like cattle/ Check! The U.S. Government does a shitty job offering health care to the soldiers who defended this nation? Definitely! Are they trying to reassure our faith in Thanksgiving? Excellent!

But that's the problem…

With the main storyline involving turkeys that reminded us way too much of the much better "Snowball" episode, and continuity-confusing animosity between Rick and President Curtis, there wasn't enough of a story to camouflage the themes so everything was in-your-face and on-its-sleeve. And for the first time this season, we found ourselves fighting the need to want to check out. Oh, and on a side note? We're hoping this Morty-bashing is going somewhere this season and that there's a "bigger picture" in play because having him as a physical and psychological punching bag is starting to feel a little weird and we find ourselves starting o brutally resent the family. Which to be clear, we're liking- but after "Rick & Morty's Thanksploitation Spectacular", we're feeling a few percentage points less confident than we were last week. 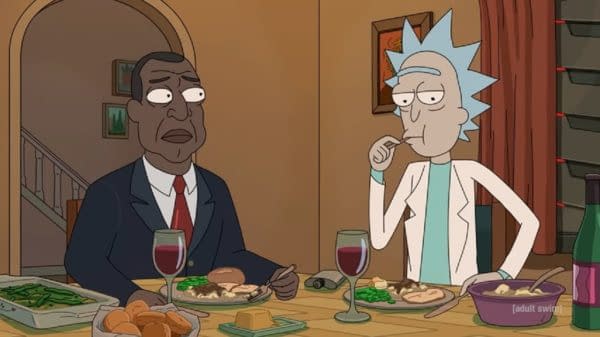 Review by Ray Flook
6/10
With the Douglas Olsen-directed and James Siciliano-written sixth episode "Rick & Morty's Thanksploitation Spectacular" kicking off the season's second half, Rick and Morty Season 5 took a step backward with an episode filled with retreaded themes in desperate need of a better storyline.

Nothing like a look at a "Hargreeves Family Reunion" to signal that filming is officially underway on Netflix's The Umbrella Academy Season 4.