This episode of STARZ's Shining Vale brought a lot more emotional impact to its story and ended up bringing itself closer to an identity that felt unified rather than disconnected. Warning, though: if you wish to avoid spoilers of any kind you should stop reading here.

Shining Vale impacted me a lot more in this episode when it came to one-on-one dialogue, whether heated or emotionally tense. It was fantastic seeing Judith Light make her appearance in this episode as Pat's mom, Joan, including a jacket that I desperately want to know where I can find because it is such a fantastic choice. These scenes involving Gaynor in this episode were way better than what I saw in the previous one. A lot more investment felt involved when witnessing her time with her grandmother. Besides a fairly funny and absurd opening scene, some of the comedy was hit or miss. While most jokes felt on-brand for the series so far, some fell flat such as the initial dialogue in the first visit to the Wicca shop in town.

The visit to the Wicca shop in Shining Vale felt slightly stereotypical, no other shops have been seen enough in the town to understand if every store has a more quirky quality to them. Audiences can tell if a town feels off, from both inner comparisons to towns in other shows and ones lived in real life. The dialogue felt rushed and so did Pat's body language but not in an anxious sense. Instead, it felt like the scene itself was written in a rush. I wasn't loving the type of sage used (if white sage) when it's something important to Indigenous communities and their traditions. There remain plenty of other ways to cleanse a house that could have been used or researched for this episode. But with a shop like the one Pat visited, those involved may not be entirely aware of items they carry or they end up simply not caring to check. We'd better understand the shop if we knew more about the town itself. Too short of focus was given on the odd book club in one of the earlier episodes. Clarity needs to be given for other parts of Shining Vale's environment if they're going to be included as they have been.

Joan's scenes were done fairly well, they got across a lot of information about Pat's past and her trauma-induced actions we can see in her adult life. STARZ's Shining Vale does tend to do great work with editing certain shots. There was a great mix of separate scenes, between Joan taking her meds followed quickly by Pat downing some of her meds but with liquor. Like I said before, plenty of conversations included an emotional charge to them that impacted me, one of them being between Pat and Terry in his study. Another moment that felt so well done to me was Joan's one-on-one with Gaynor, with a fantastic performance from Light while it gave important information to us in a natural way. Let me know in the comments what you thought about this episode! 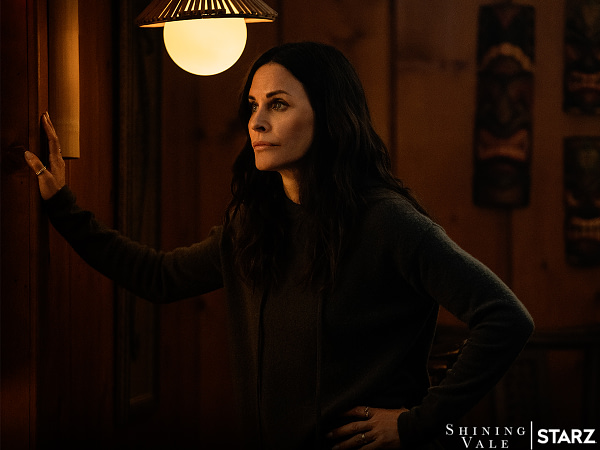 Review by Brittney Bender
8.5/10
STARZ's Shining Vale S01E05 "The Squirrel Knew" brought out some incredibly important conversations between characters, and although a misstep here and there in pacing it pulled through in the end. It forces a reflection on women's mental health and generational trauma with impact and poise.
Credits
Network
STARZ

On October 28th, Mystery Science Theater 3000 is putting together its first-ever Halloween special with a costume contest & The Mask 3D.

Gudetama & Shakipiyo search for their mom in the official trailer for Netflix's Gudetama: An Eggcellent Adventure, premiering on December 13.

A month after learning Miguel Sapochnik would be stepping down, EP Jocelyn Diaz will also exit HBO's House of the Dragon ahead of Season 2.

Billy on the Street: Billy Eichner & Jack Black Have A Question

In the latest Billy on the Street, Billy Eichner & Jack Black hit the streets to hand out free Bros tickets (if you know your "Jack Black").

Even with The CW's DC's Stargirl taking this week off, we have a look at what's to come courtesy of an S03E06 overview released earlier.

CSI: Vegas Season 2: So What to Do About Gil Grissom & Sara Sidle?