As time starts to run out for the Federation, the crew is doing everything it can to communicate with Unknown Species 10-C in the latest episode of Star Trek: Discovery. With two more episodes and the U.S.S. Discovery going beyond the great barrier, they stumble upon a desolate planet of unknown origin that might harbor clues about the aliens behind the dark matter anomaly. Meanwhile, Book (David Ajala) and Tarka (Shawn Doyle) try to calculate their next move to the DMA outside of Discovery's reach. This is your spoilers warning for the episode so tread carefully…

To find out more about 10-C, Capt. Burnham (Sonequa Martin-Green) assigns an away team that includes herself, Capt. Saru (Doug Jones), Lt. Cmdr Detmer (Emily Coutts), and Dr. Culber (Wilson Cruz) to the planet surface despite protests by the Federation delegation about the next ranking senior commanding officer (nee: Saru) to remain on the ship. Burham pleads her case and the decision is final (given the time constraints). While Book and Tarka's next move is contingent on the away team, they devise a plan to infiltrate Discovery to see what they know and act on the elements involved.

The rest of the episode consists of a mix of the away team facing uncertain threats planet-side as has become the fashion for the franchise. There were some psychological challenges to overcome in play as well, as one of those dangers plays upon each individual's fears and how they subsequently deal with them before they're able to science their way through it. Again, a familiar franchise theme over the years was once again put into play. We see Book and Tarka attempt to function as a unit to help their own cause and it surprisingly doesn't end up a colossal disaster even with the storyline opportunities afforded them. Directed by Jeff Byrd and Jen McGowan and written by Terri Hughes Burton, "Rosetta" plants the seeds for what could be (and we're hoping to be) two redeeming final episodes if this week's episode was any sign of what's to come- but it needs to be much more than this.

The title suggests extensive attempts at problem-solving facing the language barrier, but it's nowhere as nuanced as the Star Trek: The Next Generation fifth season's "Darmok" where outside-the-box thinking provided the breakthrough and resolution. The Discovery episode feeds us a line and hopes for the best on pure intuition without actually testing it first. It doesn't feel like progress, because they have no way of testing it out until they feel like finally introducing 10-C. The performances were on point for the series but it was more of an ensemble episode with no one particular performance standing out. I just wished we had more validation that what they're putting out there is worth the leap of faith we need to maintain before the season's "big reveal." 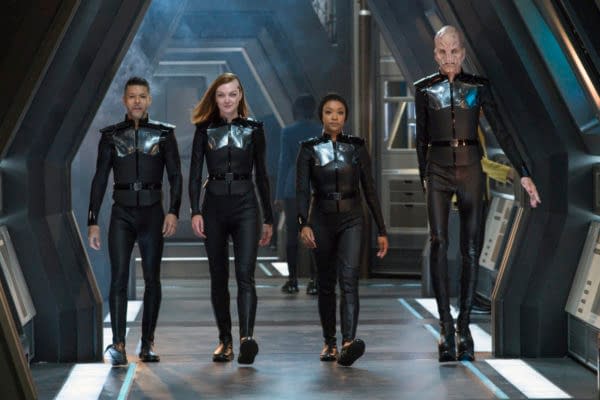 Review by Tom Chang
3/10
An episode of Paramount+'s Star Trek: Discovery dedicated to communication can't exactly work in a season where the show is still trying to figure out how to communicate where it's going. The end of the episode requires a major leap of faith, with a twist that seemed more concerned about moving us onto the remaining episodes than providing any semblance of a resolution.
Credits
Director
Jeff Byrd & Jen McGowan