When it comes to past Star Trek canon, there have been plenty of times during The Next Generation and Picard where we get pieces of the puzzle that is Jean-Luc's (Patrick Stewart) life falling into place. The episode "Farewell" provides probably one of the most definitive closing arcs for the life of the character. The third season appears to be almost an epilogue when the TNG cast reunites with him. In theater terms, that has the making for one helluva final act. As befits the title is, we do say goodbye to a number of characters. This is your minor spoilers warning.

As Jean-Luc and company try to guarantee the successful mission for his ancestor Renée Picard (Penelope Mitchell), who's bound for Europa, Adam Soong (Brent Spiner) makes one last stand to stop her. Things go predictably as planned, and I can look the other way on certain things given how weak Spiner's role has been this season because there were other elements in play. It's an unfortunate blemish considering he's played better villains in Star Trek's past in Lore in TNG and even Arik in Enterprise. He really felt lost in the shuffle in the grander scheme of things, which wasn't his fault. That blame rests at the feet of the writers, with his talents were far better utilized during the previous season.

The other actors get their chance to shine and are given proper closure. Naturally, we do get some pleasant surprises along the way and real genuine touching moments for long-time fans. The ultimate purpose of this episode was to successfully close an important chapter on the life of the title character and it did so in a way that was much more satisfying than I was initially expecting. Not since the TNG episode "Brothers" did we get such an emotional definitive deep dive into Jean-Luc's life. While the series encountered its share of "Nu Trek" hate, I'd argue that it provided the level of dramatic outlet that the films could never provide. It even offered a more satisfying next step for one of his biggest adversaries in The Borg, something First Contact (1996) couldn't even do due to its formulaic and predictable nature.

The second season of Picard felt like the completed half of a pie. Season three will end up feeling like whipped cream and cherries. And let me clear: there's certainly nothing wrong with that. While there are still more adventures to come, it's hard not to be touched at what may be Jean-Luc and Q's (John de Lancie's) final moments and perfect goodbye. Anything more in the third season would cheapen one of the things that worked and worked well this season. Directed by Michael Weaver and written by Christopher Monfette and Akiva Goldsman, "Farewell" does a wonderful job tugging at heartstrings even, surpassing last season's finale "Et in Arcadia Ego". 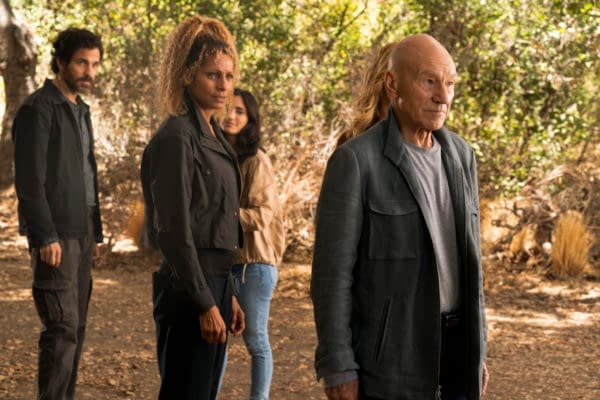 Staged Series 3 Knows What You're Thinking & Says It Out Loud

In Staged Series 3, David Tennant & Michael Sheen go all-out in breaking the fourth wall, letting the story eat itself in this "final" outing.

Gary Oldman confirms Jackson Lamb will be as awful to everyone as ever in Apple TV+'s Slow Horses Season 2, premiering on Friday, December 2.