With no disrespect meant to episode writer David Leslie Johnson-McGoldrick (who's written approximately a dozen episodes of the series & served as a consulting producer on nearly three dozen episodes) and the amazing work in this week's episode "Rogue Element," when we heard that Michael Cudlitz was directed we got pretty excited. Having already firmly established himself forever in the series' lore for his heroically tragic portrayal of Abraham Ford, Cudlitz has quickly become a primary go-to director with now four episodes of TWD and two episodes of limited series spinoff The Walking Dead: World Beyond on his filmography so far. As for the reasons why we were excited, that can be answered by sharing two key things we've come to expect from Cudlitz's helming moving forward.

First, we're going to find some interesting and sometimes unexpected music & song selections used in some rather unique ways. Well, you need to look no further than early on when we see how effectively it's used to convey Eugene's (Josh McDermitt) emotional journey he waits in vain for Stephanie (Chelle Ramos) to meet him for ice cream. And second, we expect an episode that's approach and presentation is something outside the norm of what TWD fans are accustomed to. Well, how does an episode that's a delicious mix of Femme Fatale noir, private detective thriller, All the President's Men & Three Days of the Condor, with a splash of JFK conspiracy thrown into the mix (unless we misread the double-meaning by the building being named "Ruby's") sound? Because for us, that makes for not only another impressive episode but it continues the long-running series' track record when it comes to swinging for the fences creatively and hitting home runs left and right. At this point, we're throwing on the "MAJOR SPOILERS AHEAD!" sign and throwing down an image spoiler buffer because we're doing a deep-dive into why "Rogue Element" worked so well.

Eugene & "Stephanie": So what's one of the classic flawed traits of a lead character in a "femme fatale noir"? That as smart as they are and how detailed their conspiracy theories can be, their hearts (or ego or misogyny) always keep them from being able to see the truth. That the person they think they know & love is always the victim in need of saving, and that they are the only ones of purity to save them. Until they learn it was the focus of their affection all along- hopefully, still able to walk (or limp) away from the experience instead of on ending up in the trunk of a car at the bottom of the bay. That's Eugene in every possible way, except we feel for him more because of how intimately involved we've been in his life up until this point- and Cudlitz & Johnson-McGoldrick know it.

That's why Eugene was so perfect to use because it made the viewer part of Eugene's growing conspiracy and investigation. Sure, we had a pretty good idea where all of this was heading but we had to stay along for the ride. Because it was Eugene. It wasn't some poor shlub we could judge with a cool sense of detachment. So we rode shotgun with him toward its inevitable end, with Eugene left with no recourse (at least for now) but to deal with knowing that his anger at what was done to him is tempered by the guilt he feels over being angry because his getting played may have very well have saved his friends lives (as Josh Hamilton's Lance Hoyt so bluntly explains to him). And yet even as we watch Eugene burn the draft of the sci-fi novel he wrote that he allowed "Stephanie" to read, we can't help feeling like Lance may have underestimated Eugene, and we see how well underestimating Eugene has gone in the past. Especially with Margot Bingham's apparent real "Stephanie" making her presence known…

Connie & Kelly: Okay, this goes out to Angela Kang, Scott M. Gimple, and anyone else in major positions of power & decision-making. We need an episode of Tales of the Walking Dead where Connie (Lauren Ridloff) & Kelly (Angel Theory) solve some conspiracy-riddled mystery where the focus can be solely on them. Because they are officially now our favorite tag-team badasses. Think about it. They come into a community that's as close to "normal" as they've seen after years of being out in the walker wilds. It would be so easy to just blend in, publish fluff public relations articles about how great the Commonwealth is, and most likely do very well for themselves.

But that's not Connie or Kelly, with their need for the truth and to expose any potential evils within the foundations of the Commonwealth a priority over their personal comfort. Add into that mix an editor looking to shut them down, an adversarial past with Gov. Milton (Laila Robins), ominous warnings from Mercer (Michael James Shaw) when they start asking questions (especially after they learn who Mercer's sister is), Mercer beginning to question his orders, and cloak-n-dagger moments like lists of names being slid under doors anonymously, and we have the makings of a storyline that viewers probably shouldn't be sleeping on. Especially as we move closer to the series finale and better understanding of how everything connects. Confession? That list that Connie & Kelly received vibed CRM to us for some reason, like maybe those folks are research facility-bound?

Carol & Lance: If Connie & Kelly are our new tag-team badasses, then Carol (Melissa McBride) and Lance are our new political power couple (no, not in a romantic way). One of our first takeaways is that TWD may finally be presenting us with the most neutral, realistic-thinking character in the series run in Lance. As he explains to Carol, he knows and understands how every aspect of the Commonwealth runs… including those things folks like Gov. Milton wouldn't bloody their hands with (Lance even reveals that he earned the Miltons' loyalty for whatever work he did for them in the past). And that means making some tough decisions for the greater good, whether that means screwing over Eugene or having an opium manufacturer taken into custody for ripping off his workers.

Yet as he explains to Carol the differences between those who are mercenaries just looking to personally gain from a situation to those who are true believers, we begin to see Lance in a much more gray area because he comes across in every way, shape, and form as a true believer in what the Commonwealth is and what it could become. But does he see the Miltons feeling that way, or does he see them more in the "mercenaries" camp? That still wasn't too clear. What was clear is that Lance is looking to get Carol to trust him, and opening up to her the way he did and then basing his arrest of the opium manufacturer on her assessment went a long way to establishing that trust. Why? Because as much as our survivors have depended on Carol as a badass killing machine, Lance is respecting her mind and ability to see "bigger pictures." In a number of ways in this episode, they're not much different from one another & Carol's inability to get a feel for Lance's agenda makes this relationship an interesting one to keep an eye on.

It was nice to see Princess (Paola Lázaro) and Rosita (Christian Serratos) being there for Eugene, with Princess playing the important role of Eugene's "Watson" while also offering a much-needed "Devil's Advocate" perspective that didn't take away from her support of him. The fake lasagna bit was a smooth move (but we would've been pissed), but the "Emmy moment" for Lázaro was when Princess opened up about her father leaving to Eugene to let him know she can relate.

The only thing more threatening than Mercer as he protects his soldiers (wow, what a slaughter!) is a Mercer who's beginning to feel like he's bitten, chewed & swallowed one too many "shit sandwiches" to keep the peace in the Commonwealth. Connie & Kelly had already gotten into his head earlier, and then he learned he had been left out of the loop at the hospital over moving Tyler to some mysterious new location? Yeah, we're seeing the anger growing. But was he angry enough to be the one to tip off Connie & Kelly that their theories go much deeper than they imagine? We don't know yet, but the fact that we're actually having fun trying to piece it all together is why this episode & this season of AMC's The Walking Dead could end up being its best yet. 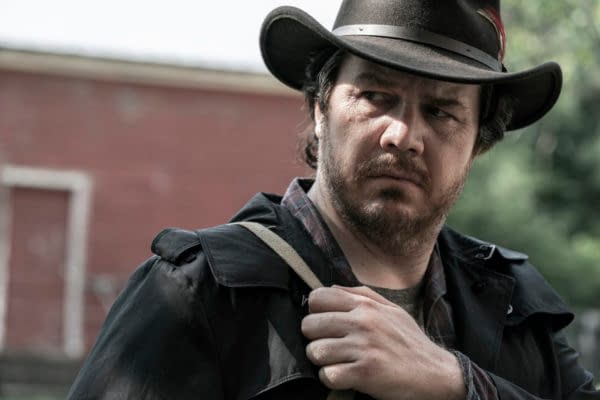 Review by Ray Flook
9/10
So how does an episode of AMC's The Walking Dead that's a delicious mix of Femme Fatale noir, private detective thriller, All the President's Men & Three Days of the Condor, with a splash of JFK conspiracy thrown into the mix (unless we misread the double-meaning by the building being named "Ruby's") sound to you? Because for us, that makes for not only another impressive episode but it continues the long-running series' track record when it comes to swinging for the fences creatively and hitting home runs left and right. Here's a deep dive into why the David Leslie Johnson-McGoldrick-written and Michael Cudlitz-directed S11E11 "Rogue Element" worked so well on so many levels.

Rick Cosnett, Matt Letscher, & Jessica Parker Kennedy are set to return for the ninth and final season of The CW's The Flash.

Netflix's Debra Jo Rupp & Kurtwood Smith-starring That '90s Show has been renewed, returning to the streamer for a 16-episode second season.

With the Paramount+ series premiering on March 26th, here's a look at the newest teaser for the Kiefer Sutherland-starring Rabbit Hole.

Rick Cosnett, Matt Letscher, & Jessica Parker Kennedy are set to return for the ninth and final season of The CW's The Flash.