In the interest of full disclosure? Yes, it feels incredibly weird to be reviewing the final season premiere of AMC's The Walking Dead but unpacking that emotional baggage will just lead us down an emotional rabbit hole that we're just not ready to go spiraling down quite yet. So instead, we're just going to temporarily (and possibly unhealthily) push all of those feels deep down inside and mark them "Do Not Open Until Summer 2022." Instead, we're going to approach the Kevin Dowling-directed and Angela Kang & Jim Barnes-written "Acheron: Part I" with the same rules we apply to the previous ten openers. But before we get to any of that, we're throwing on the "MAJOR SPOILERS AHEAD!" sign and throwing down an image spoiler buffer before doing a deep dive, which means we'll meet you after the jump.

So just to let you know, I apply a basic rule to series and season openers. First, they have to set up what viewers need to know to connect with what's going on with the episode. Then, they have to start setting up the storyline threads for the season. The former is the one area where I have not so much as a criticism as much as acknowledging a missed opportunity. With so much going on with so many people in "Acheron: Part I", it would've been nice to have a more extensive "Previously on" opener to recap more of those Season 10 extra episodes because you need to know them to have a better appreciation for what's going on.

That said, this was how you start a season that you've been promoting as epic and game-changing in scope and impact. With Dowling, Kang, and Barnes, you have visionaries who understand these characters and their world to their very core, and it showed in so many ways. But for the sake of this review, we're focusing on the three aspects that caught our eyes the most:

Old-School Badassness: Not looking to waste a second, the action kicks off with Daryl (Norman Reedus), Carol (Melissa McBride), Kelly (Angel Theory), Jerry (Cooper Andrews), Rosita (Christian Serratos), Lydia (Cassady McClincy), Maggie (Lauren Cohan), Alden (Callan McAuliffe), and more looking to take advantage of the military base Daryl discovered to gather supplies for a hurting Alexandria. Two minutes in, and we're caught up in the same "Mission: Impossible" vibes we had back in the first half of the ninth season. Seeing our heroes work together as a unit never gets old (Terminus, anyone?), but seeing how in sync they were even when something as simple as a drop of blood creates a walker ripple effect that changes their plans dramatically elevates our appreciation. And with Carol, we see a slow shift back to the version millions have been wanting to see: the badass who takes chances for the community's greater good and not for painful, self-destructive reasons. Hell, she even gets Daryl his knives back.

Maggie/Negan: Not that it needs to be said, there's nothing more I can say about Cohan or Jeffrey Dean Morgan's performances that folks don't already know. They continually offer master classes in acting, offering performances that come across more as watching a live theatrical performance than as an episode of a cable series filmed months ago. But we're tipping our hat to Kang and Barnes in two major ways. First, by dragging the 800 lb. elephant in the corner of the room right out into the middle with the Negan/Maggie confrontation. Negan sees a little too much "Captain Ahab" in Maggie, looking to take too many risks to kill her "Moby Dick" in the Reapers, and he's not having it. And by bringing it up in front of everyone, he not only bought himself some time but also two more people on his side. Thankfully, Maggie was able to undercut some of it with the honesty of her response. By having them confront this matter now, our writers avoided the episode being criticized for avoiding the obvious and stretching out the inevitable.

And as for that ending? Okay, first? We were impressed that they didn't end on a "will he or won't he?" cut to black, or with Negan saving her as some kind of early redemption move. Once again, quality writing knows how to avoid cliches and still make the dots connect. And while it may have been a cold move on his part, can you really blame Negan? After all of those truths that were spilled earlier, did Maggie really think the person she was setting up to kill wouldn't kill her at the first chance? Negan may have vowed to Lucille to become the man she knew he could be, but he realizes that's an easier thing to do while he's still breathing.

Commonwealth Has Us Hooked: Okay, it's not that we didn't have high hopes for what was going on with Eugene (Josh McDermitt), Ezekiel (Khary Payton), Yumiko (Eleanor Matsuura), and Princess (Paola Lázaro). But after this episode, I could make the argument that their storyline is deserving of their own full episodes. First, because the chemistry between the foursome was insanely on-point- no better evidence of that than the scene where Princess runs down the personal lives of two Commonwealth guards while the other three's facial reactions do more than words ever could to chart their journey from doubt to utter disbelief in just how much of a human tape recorder Princess has proven herself to be. Speaking of that scene, it's also the moment that Lázaro proved once again why she deserves to be discussed as one of the series' major players. And while not exactly known as a wordsmith this episode, Michael James Shaw's Mercer makes his presence known in an impressive way- in particular, the body language he shows when you can tell Mercer wants to school Ezekiel on his real backstory but refrains to remain professional.

So with an impressively intense season-starter, check back in with us next week when we review AMC's The Walking Dead S11E02 "Acheron: Part II": 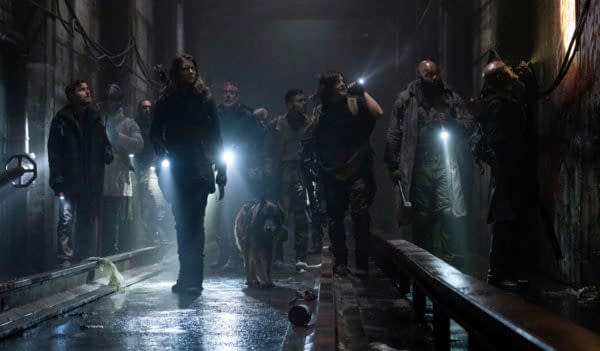 Review by Ray Flook
9/10
The Kevin Dowling-directed and Angela Kang & Jim Barnes-written 11th season opener of AMC's The Walking Dead ("Acheron: Part I") is how you start a season that you've been promoting as epic and game-changing in scope and impact. With Dowling, Kang, and Barnes, you have visionaries who understand these characters and their world to their very core, and it showed in so many ways. But the aspects that stood out to us? The old-school badass action, the ever-evolving Negan/Maggie dynamic, and some interesting interviews over at the Commonwealth.

Doctor Who star David Tennant teased that with the 60th-anniversary special, leaked set photos "aren’t even close to the whole story."

The Continental: John Wick Spinoff Now Landing at Peacock In 2023

Lionsgate's three-part "John Wick" spinoff event The Continental has moved from STARZ to Peacock and will hit screens next year.

She-Hulk Preview: Jennifer Walters Will Go Green So You Can Get Green

With only hours to go until AMC's Better Call Saul ends its run, here's the key art for "Saul Gone" that makes it all feel a little too real.

Doctor Who star David Tennant teased that with the 60th-anniversary special, leaked set photos "aren’t even close to the whole story."

The Continental: John Wick Spinoff Now Landing at Peacock In 2023

Lionsgate's three-part "John Wick" spinoff event The Continental has moved from STARZ to Peacock and will hit screens next year.

She-Hulk Preview: Jennifer Walters Will Go Green So You Can Get Green

With only hours to go until AMC's Better Call Saul ends its run, here's the key art for "Saul Gone" that makes it all feel a little too real.