We mentioned Lords of Empyre: Hulking earlier, Lords of Empyre: Celestial Messiah is the second such one-shot – though if it is as essential as Hulking is, I couldn't tell you. Written by Friendo writer and member of London's White Noise writers studio, Alex Paknadel let AIPT know, "The Celestial Messiah is one of the more conflicted and intriguing players in the Empyre event, so I was thrilled when Marvel approached me to bring his story to life. This tie-in is an all-you-can-eat buffet of high-stakes cosmic melodrama and I had an absolute blast writing it."

The eve of Quoi's ascension is at hand! But when the trials are interrupted by an unexpected interloper—Mantis—who will win this battle of wills?

Don't miss out as mother and son go head-to-head, revealing secrets that will shape the course of the galaxy!

Here's what we said about The Celestial Messiah last time it came up;

Maybe it's time to re-read the Celestial Madonna Saga from Avengers from the seventies – and revisited in the eighties and nineties?

Begun by Steve Englehart, the plot was, at the time, the most complex written in an American superhero comic book. It begins with the revelations of the Star-Stalker, and soon drags Earth's Mightiest Heroes into a cosmic clash between Captain Marvel and Thanos. The Swordman had returned to the Avengers and brought Mantis with him, the half-Vietnamese, half-German ninja daughter of Gustav Brandt-Libra. Her father left her in Vietnam as a child at the Temple of the alien Priests of Pama, a sect of the Kree. The Kree believe she might become the Celestial Madonna and mate with the eldest Cotati on Earth to become the mother of the Celestial Messiah, "the most important being in the universe".

She excels in her martial arts studies, but when she reaches adulthood, she is mind-wiped and sent into the world to gain life experience. She becomes a prostitute and barmaid in a Vietnamese bar, where she meets the Swordsman. She helps him regain his self-respect and follows him when the former villain attempts to rejoin the Avengers. She becomes an Avengers ally when the Swordsman rejoins the Avengers, and she battled the Lion God alongside them.

Mantis becomes taken with the Vision, and—although rejected by the android—neglects the Swordsman. Alongside the Scarlet Witch and Agatha Harkness, she was abducted by Kang, revealed as the Celestial Madonna and witnessed the death of the Swordsman at the hands of Kang, only realizing the depth of her love for the Swordsman just as he dies. She would learn the origins of the Kree-Skrull War, the Cotati, and the Priests of Pama. Mantis then formally joined the Avengers and is revealed to be, indeed, the Celestial Madonna and marries a Cotati in the reanimated body of the Swordsman, leaving the Avengers and the Earth to mate with him.

After she bears her child, Sequoia, she takes the name "Mandy Celestine" and lives with him for a year in Willimantic, Connecticut before handing him to his father's people and going into space with the Silver Surfer and battling the Elders of the Universe alongside the Surfer. This comes to a head when Mantis is caught in an explosion and presumed dead by Silver Surfer.] She survives, but the strain of the previous years causes her to literally split into multiple versions of herself, each representing conflicting aspects of her psyche that could no longer co-exist inside her mind.

In "The Crossing" in 1995, Mantis returns as the villainous bride of Kang the Conqueror with the intention of bringing death to the Avengers; her father Libra and the Cotati alien who had possessed the Swordsman's body and married/impregnated her. Her anger at her father  and the Cotati center around their "defilement" of her and that she hates the Avengers for believing their manipulative lies. The storyline was controversial, so much so that Kurt Busiek, in Avengers Forever retconned the Mantis who appeared in the story as being a Space Phantom brainwashed into thinking he was Mantis

Eventually, Mantis reappears in the Steve Englehart-written Avengers: Celestial Quest limited series. She returns to Earth and merges with her remaining fragmented portions of her personality (which we learn represent "freak, mother, prostitute, mystic, and Avenger") after the first four are killed by Thanos (later retroactively declared to be a clone of the real Thanos). The final Mantis merges with them to become a "complete" Mantis for the first time since her dispersion. Thus reformed, she and a group of the Avengers go into space to stop "Thanos" from killing her son, Quoi, who by this time is a rebellious teenager desperate to leave the isolation of the Cotati home-world and travel the stars.

Well, it looks like the upcoming A4: Empyre event comic will be revisiting much of this, teasing this Mike Del Mundo image. 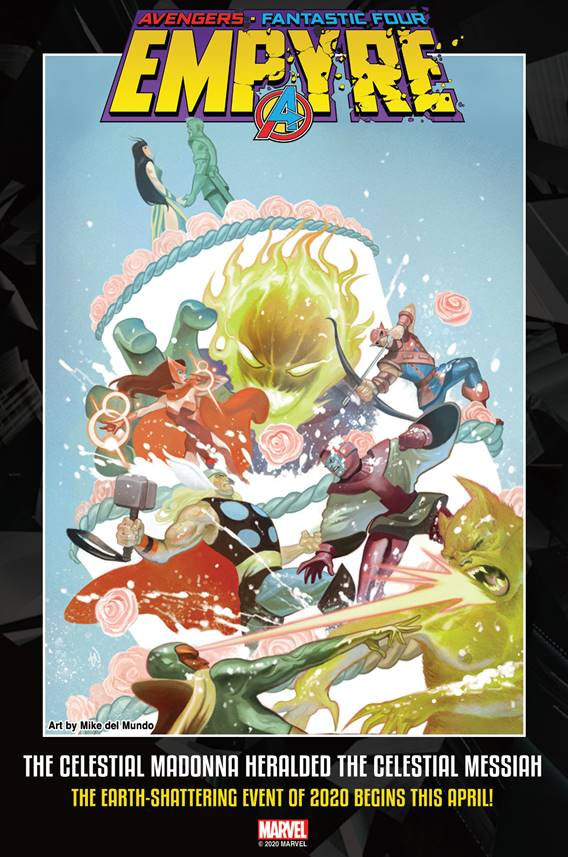