AUG181554
(W) Larry Spike Jarrell, Selena McDevitte (A) Larry Spike Jarrell
6,000 years ago, the Annunaki, visitors to Earth, departed with numerous animals as subjects for study and DNA experiments.Centuries in the future, these evolved beasts, collectively known as N'Naki, have created vast civilizations in the Sirius system, with humans serving as their worker bees.One group of N'Naki are given a pre-graduation duty: Scan a mining world of human workers that's fallen victim to a viral infection before the planet is demolished to stop the disease from spreading.But when a sixteen-year-old Annunaki girl turns up, the mission quickly becomes anything but routine.
In Shops: Oct 31, 2018
SRP: $3.99 AUG181556
(W) Trent Luther, Brian Ball (A) Luigi Teruel
Continuing on with her story, Regina finds shelter with a group of survivors laying low inside of a superstore.After an initial encounter with another survivor, Regina memories of the incident that initiated her PTSD begin to resurface.
In Shops: Oct 31, 2018
SRP: $3.99 AUG181558
(W) Bill Williams (A) Matthew Weldon
Mel was a cloaked super-powered representative of a superhuman group entrusted with protecting all Mankind. After being forced to retire, Mel meets Jessie, who agrees to take her place as a costumed heroine. Mel becomes a mentor to the new cape in town as Jessie joyously engages the role of heroine, meeting the other super-types in the big city of Seaholm and beyond.
In Shops: Oct 31, 2018
SRP: $3.99 AUG181560
(A) Brian Denham
If you're feeling walled off from fashion, trapped in a world of oversize ties and dumpy golf shorts, here's some change (of clothing) you can believe in! Can we bring you a bold, beautiful T-shirt celebrating the glorious diversity potential of American fashion? Can we make it feature a superhero president with ancestry in a glorious (fictional) African kingdom? Yes, Wekanda!
In Shops: Oct 31, 2018
SRP: $21.99 – $24.99 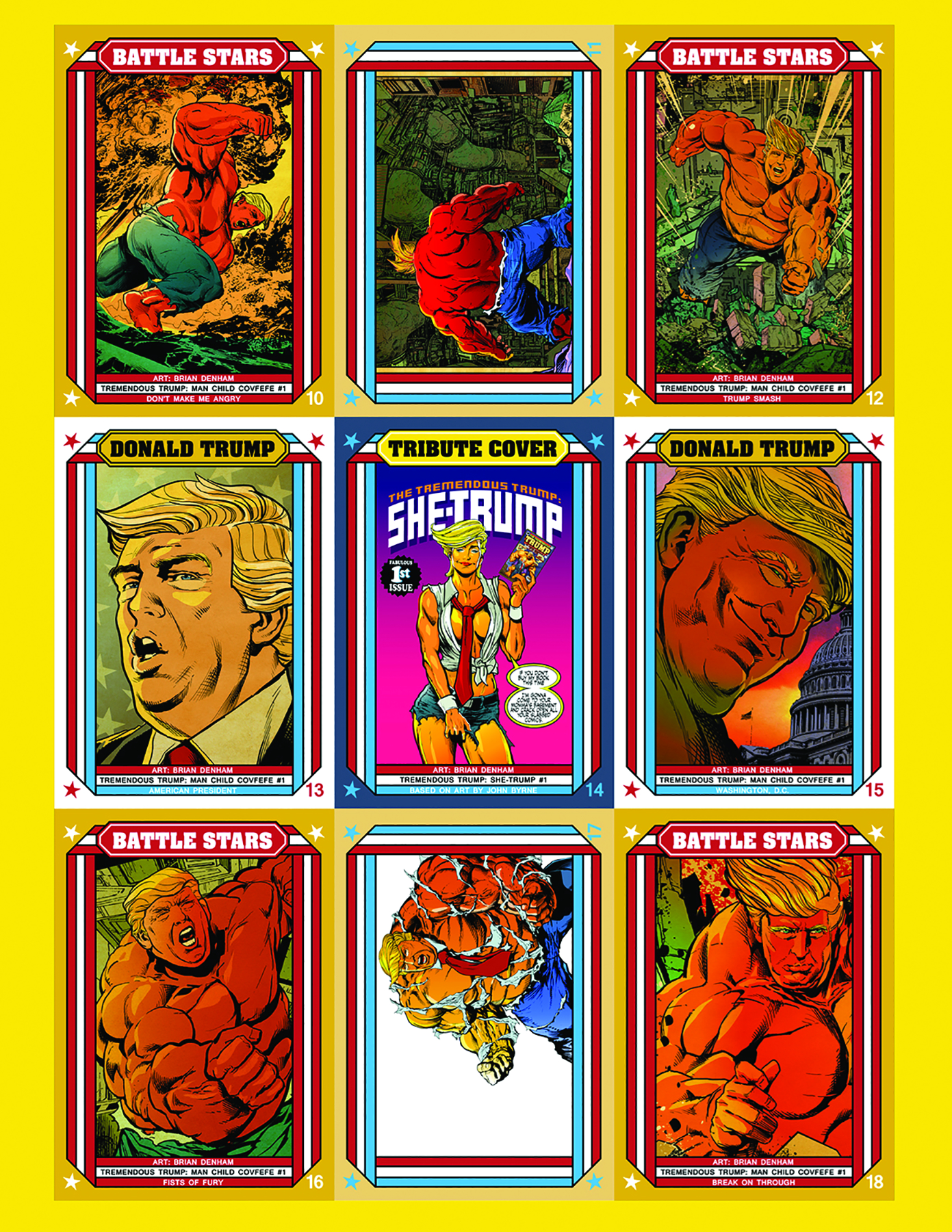 AUG181566
(A) Brian Denham
There are so many cards out there, some of them very fine cards, we're sure. However, some companies are definitely not sending their best cards.We are going to give you a big, beautiful sheet of trading cards, and it's going to be solid, 3 x 3, which is very nice.We're thinking about some see-through capability, maybe with perforations, but you can be sure these cards will have some solid borders.And thick, so thick, ten sheets in this pack, so it will really be tough to get through…unless you open the pack, but that would be not so great.
In Shops: Oct 31, 2018
SRP: $89.99