Like a fine Greek or Shakespearean tragedy, Batman '89 #3 continues to wonderfully depict the fall of Harvey Dent as Bruce Wayne gets reacquainted with two old friends: the limelight and Catwoman. This literally picture-perfect continuation of the Michael Keaton-led cinematic experience outshines the Tommy Lee Jones experience and adds so much depth to the mythos of Two-Face.

Harvey Dent is a glory-seeking politician walking a fine line between serving the community that made him and chasing his own ambitions. When a teenager called Drake was thought to be inside a burning building, was it Dent's desire to do good or to be seen doing good? It might be hard to even ask him as he first imagines a life where he saved Drake and went on to greatness … only to wake up having breathed in sulfuric acid and having half of his face burned off. This is the first step on a journey into troubling circumstances, and it is amazing how writer Sam Hamm makes this so wonderfully fit the performances and tone of Billy Dee Williams. Likewise, the artwork from Joe Quinones, Leonardo Ito, and Clayton Cowles brings this pastiche of the 90s noirish Gotham and the modern-day to vibrant life with detail and clarity.

Then there's the Bat himself — struggling with the weight of his work and desperate to avoid the limelight, with his perceptions shaken by the return of his love interest Selina Kyle … who was supposed to be dead. Wayne is also just meeting this teenager named Drake, who's put a lot of the answers together. Each of these meetings is played with such perfect pacing that this really, really should be something we should have seen on the screen.

For Batman fanatics, this may be just about perfect, and for even the casual fan, this is extremely excellent storytelling. Climb in; this Bat-bandwagon's got room. RATING: BUY.

Batman 89 #3
By Sam Hamm, Joe Quinones
As the fire rages at Royal Auto, Harvey Dent lies trapped inside, unconscious and in danger. Can Bruce Wayne get to Harvey in time, or will the district attorney leave burned — in more ways than one? 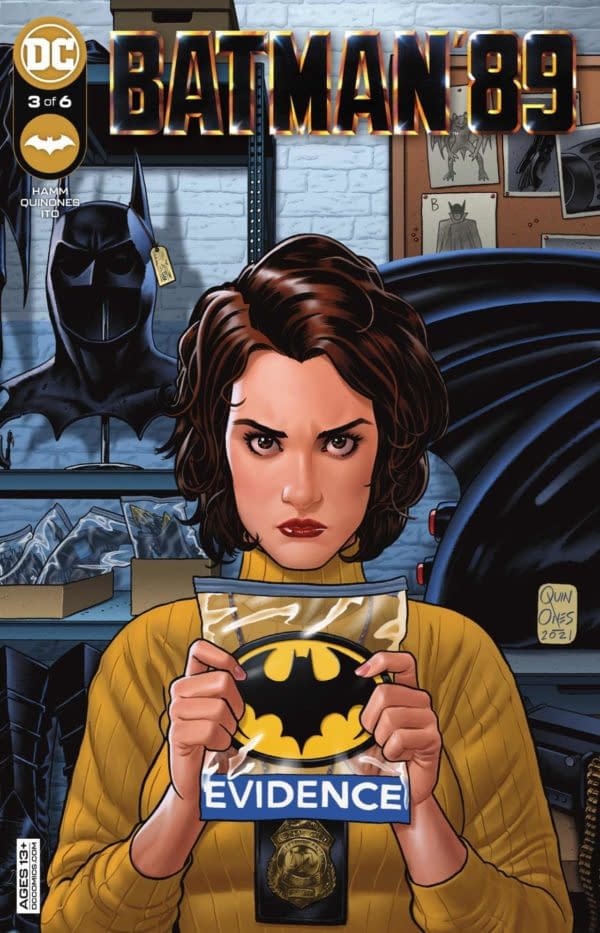 Review by Hannibal Tabu
8/10
The Tragedy of Harvey Dent kicks into high gear as a would-be hero lurks in the shadows, the Cat uses another life and Batman tries to make sense of it all.
Credits
Editor
Andrew Marino

The Fascinating History Behind V-Man in Fox's V-Comics, at Auction

V-Comics was inspired by the details of the legendary WWII British propaganda campaign that launched V for Victory symbolism in 1941.

You can now bid on an original page from the Brian K. Vaughan and Tony Harris comic book classic, Ex Machina, over at Heritage. Sponsored.