Here's how it works. Buy a book. You're then entitled to twice that dollar amount for FREE. Leave a note of what you want for FREE with your PayPal payment. I will include it with your order that will ship lightning fast & well protected. Sound good? I'll be shipping every order over the next 24 hours so that you have it for Christmas.

Plenty of Black Friday deals are still going on. But Cyber Monday turns to focus on the website offerings more…

Amazon continues their Cyber Monday deals on comics, with this Obsessed With Marvel volume by Peter Sanderson taking pole position, and string deals on Marvel, Dark Horse, IDW and more.

Marvel leads with a stack of free Inhumans comics ahead of the Inhumanity event kicking off this week. And a rather good deal on Marvel Unlimited Plus for the price of Mavel Unlimited… the code you need is Cyber13 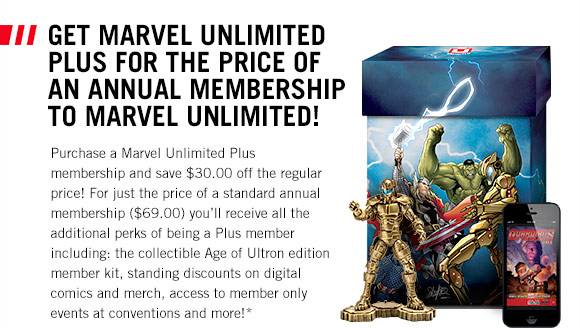 Fantagraphics is giving 30% off. As is Top Shelf with the code: CYBERTSP.

ComiXology is giving 40% off a selection of collections including Scott Pilgrim and Adventure Time, as well as volumes of New 52 for $4.99 each – still not as cheap as the 80 cent Suicide Squad deal on Kindle though.

With 30 collections including Adventure Time, Scott Pilgrim, Transformers, and more, get 40% off one of these fan favorites! Enter CYBER40 at checkoutOffer expires 12/2 Offer expires 12/2. Offer is limited to qualifying 30 books. Enter code at checkout. Offer can only be redeemed on comiXology.com

The DC deal is also available on Barnes & Noble's Nook.

Skybound is doing 25% off everything sale.

Khepri Comics is selling everything they have left for big discount with the code: CHEETAH40MON.

Dark Horse have 50% off the entire Dark Horse store – and 60% if you use a unique code. First person who wants to use mine, gets it! CMGTR7SSAS

Reed Pop is blowing out all sorts of NYCC apparel and stuff.

$100 spent at Things from Another World's sales gets you $10 worth of digital Dark Horse Comics.

Aspen Store are blowing out loads of stuff online.

It's the last day for the Dynamic Forces Black Friday Through Cyber Monday sale with a lot of signed books and limited editions plus the collectors set shown above.

And finally… donations made to the CBLDF today will see The Will and Ann Eisner Family Foundation give an extra dollar for each, and an extra five dollars for each new membership or membership renewal.

Know any more? Send them in!