Yesterday, Bleeding Cool pointed out a rather special ending of Action Comics #1009 that suggested that Superman may have a new super power. And that he and Lois may have used it as a bit of a kink.

Though there was some confusion as to whether this was as a result of the mentioned Kryptonian tech, whether it was a power facilitated by that, whether it was red Kryptonite of some sort or… what. But Superman grew a beard in seconds, with curly hair to match. 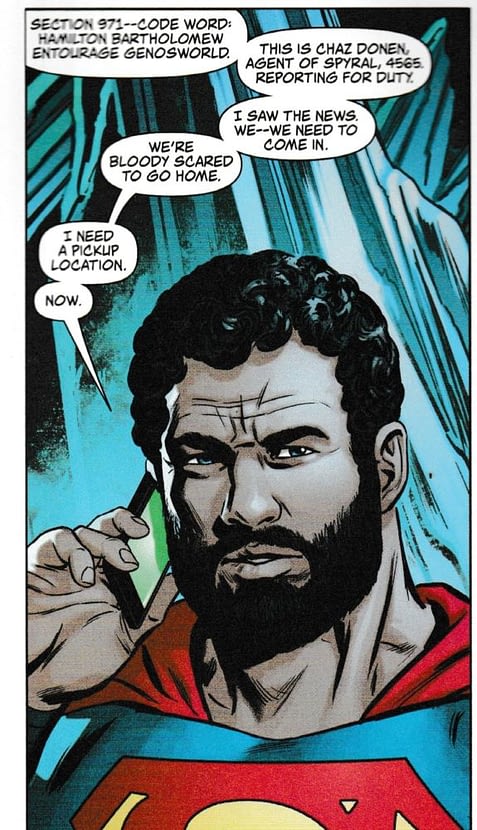 Seems that this confusion may have been a result of the creative and editorial process.

On the Word Balloon podcast with John Siuntres, Brian Bendis talked about his current work at DC Comics.

He stated that he wanted Superman to be able to grow a beard by just flexing his jaw muscles, but that DC Comics editorial declined to add that super power to Superman's list. And told him to use the Kryptonian technology to make it happen instead. Even though the reaction he got from the room at a DC Creative summit was overwhelmingly positive…

Siuntres recalls Superman did have face-manipulating powers back in the day, and I do too. But apparently this eveidence was too late for Brian to use.

We also heard him address the Lois and Clark bad parent issue saying that, regarding letting Jonathan Kent go off with Jor-El, that everyone has a blind spot for family and that the members of Young Justice won't be returning to Earth straight after their current adventure – but going to different dimensional Earths in #6 and #7. He also talked about how Young Justice came from wanting to do what he did at Marvel with Miles Morales at DC, and Dan DiDio pitching Young Justice to him.

Though he could see DiDio thinking how to talk Brian Bendis out of wanting to do Wonder Twins. That DiDio has said no to so many people over that comic, then saying yes to Bendis would be a pain in the arse… but getting Mark Russell on as writer solved a lot of people's problems. Bendis told Mark that his 6-year old daughter had told him that Wonder Twins was the coolest idea she'd heard of and it was his job to prove her right.

As for Naomi, he says every issue will open a door to something that wasn't in the DC Universe before…

And plotlines from Superboy in Gemworld, the Earth going to the Phantom Zone, Jonathan Kent going to Earth 3, and actions taken by Leviathan are all going to tie together for DC's Year Of The Villain with a lot of new characters too.

And the reunion of Jonathan and Damian is to come…

Monster Fun Back To School In Rebellion 2000AD August 2022 Solicits

The Superheroic Horror of Shield-Wizard Comics #11, Up for Auction

Jughead gets a job funneling cheap high school labor to a local advertising agency in this preview of Archie Giant Comics Splendor.

Damian Wayne finds his calling in this preview of DC vs. Vampires: Hunters #1. And yes, it's vampire murder.

Preview Gender Queer: A Memoir deluxe edition hardcover, coming from Oni Press in June, ahead of FOC on Monday.

Robin #14 Preview: Deathstroke and Talia Al Ghul to the Death?

Deathstroke has finally caught up with Talia Ghul, and he's really holding a grudge in this preview of Robin #14. So is she.

PReview Jonna and the Unpossible Monsters #10, by Chris Samnee, Laura Samnee, and Matthew Wilson, ahead of Monday's final order cutoff.