As scooped by Bleeding Cool a month ago, Source Point Press is launching the first comic book based on the Kickstarter-funded tabletop game. Gloomhaven: Fallen Lion is a one-shot by Travis Mcintire, Nolan Nasser and Tyler Sowles. It's not the only comic launching from Source Point in December, but it may be the best-selling. Other new titles include dinosaur comic The Roaring 20s by Josh Sobek, Chris Hamann, Gary Sobek, Milena Deneno, Era Of Great Wonders by John Myers and Jennifer L. Myer, and Claim: Song Of Iron And Vice by Gregory Wright and Mihajlo Dimitrievski. Here are the full solicitations for the month.

OCT201567
(W) Travis Mcintire (CA) Nolan Nasser (A/CA) Tyler Sowles
The City of Gloomhaven can be a tough place to make it as an adventurer, and being in the right party is key to survival. The Jaws of the Lion are the top of the mountain in the hierarchy of the city, but their latest job goes sideways, and Anaphi, the mind-thief, is to blame! The first comic from the wildly popular Gloomhaven game launches a fantasy world unlike any in existence. Get ready for Quatryll punk bands, drug dealing Inox street gangs, and a dark God sleeping beneath the surface, eager to destroy the world. Welcome to the City!
In Shops: Dec 30, 2020
SRP: $3.99 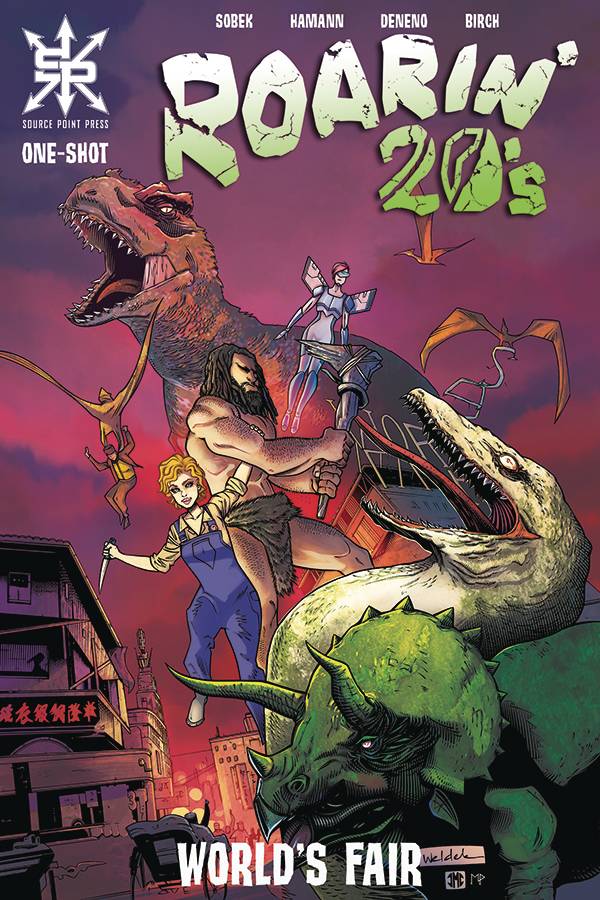 OCT201568
(W) Josh Sobek (A) Chris Hamann, Gary Sobek, Milena Deneno
When a malfunctioning time machine lands dinosaurs in the year 1920, the Jazz Age gets prehistoric in this introduction to a whole new dinopunk history!
In Shops: Dec 30, 2020
SRP: $3.99 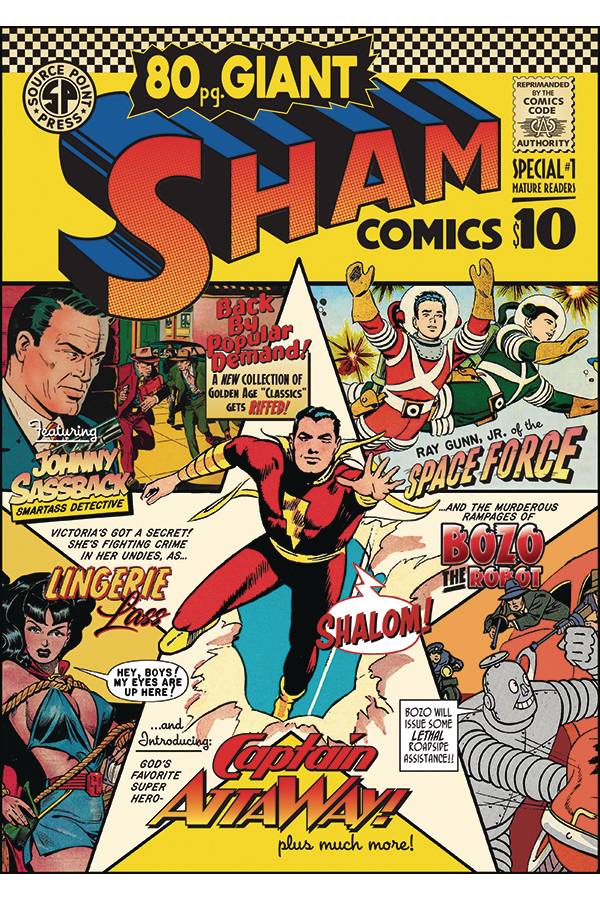 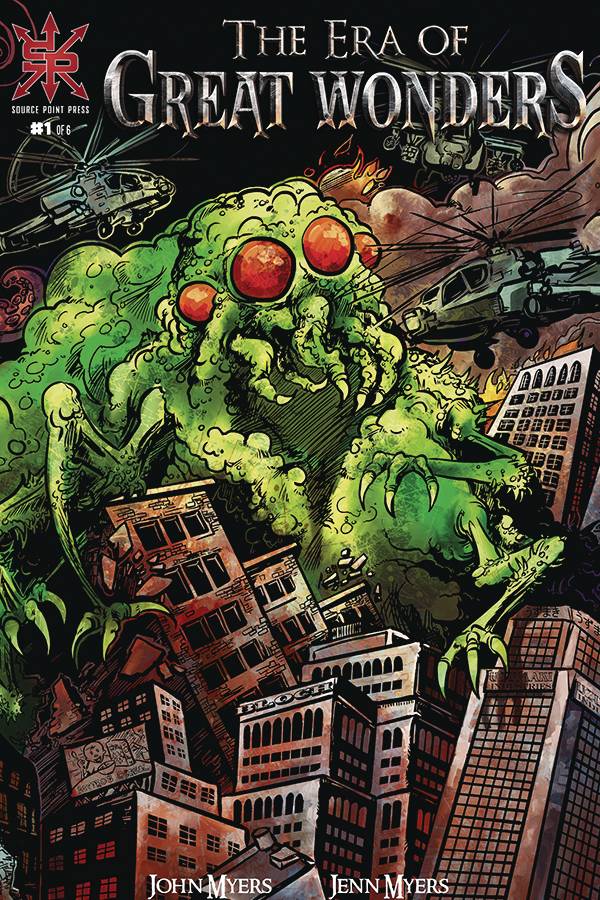 OCT201570
(W) John Myers (A) Jennifer L. Myer
Three middle-schoolers set out to explore the ruins of a world torn apart by the sudden and terrifying appearance of giant monsters and in the ruins discover a brave new era of great wonders.
In Shops: Dec 30, 2020
SRP: $3.99 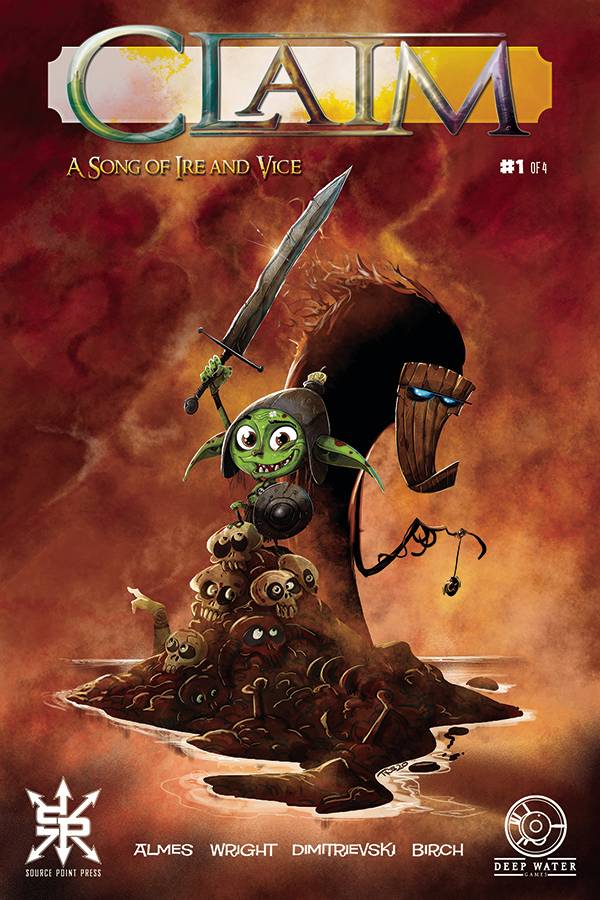 OCT201571
(W) Gregory Wright (A) Mihajlo Dimitrievski
War has come to Unstablovakia, and the country's two most incompetent mercenaries realize it's their time to shine! King Ned is dead, drowned in a wine barrel without any apparent heirs. Now, our mercenary "heroes" – a delusional goblin and his silent doppelganger sidekick – fight with the five factions that sprung up to claim the throne. Who will win? Will the kingdom survive? And will there be anyone left to pay the mercenaries? Based on Claim, the hit fantasy card game from Deep Water Games, Claim: A Song of Ire and Vice provides swords, sorcery, and satire in a crazy, kingdom-stealing caper. Claim it while you can!
In Shops: Dec 30, 2020
SRP: $3.99 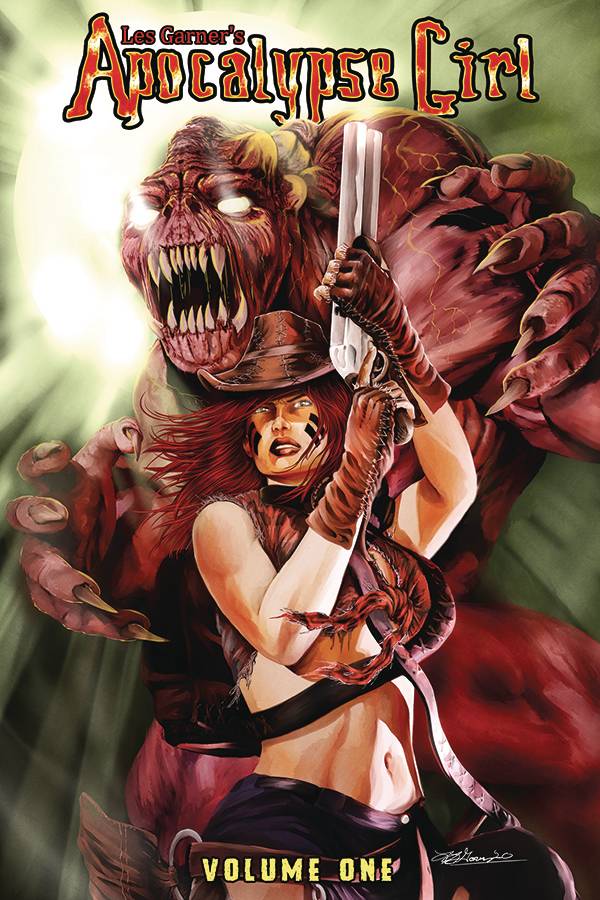 OCT201572
(W) Les Garner (A) Les Garner
From the carcass of a burned out city she has known as home, to a small town torn between the factions of the enigmatic Mama Shotgun, madame of the town brothel, and Pastoer Jacob, preacher to the tent city "flock" on the outskirts, Apocalypse Girl follows the journey of Anna, from the loss of her papa, to her search for his friend, Abraham, plunging her in to both the conflicts of the town and pitting her against the tyrannical warlord known as General Cleaver and his chief lieutenant, "The Handler."
In Shops: Dec 30, 2020
SRP: $19.99 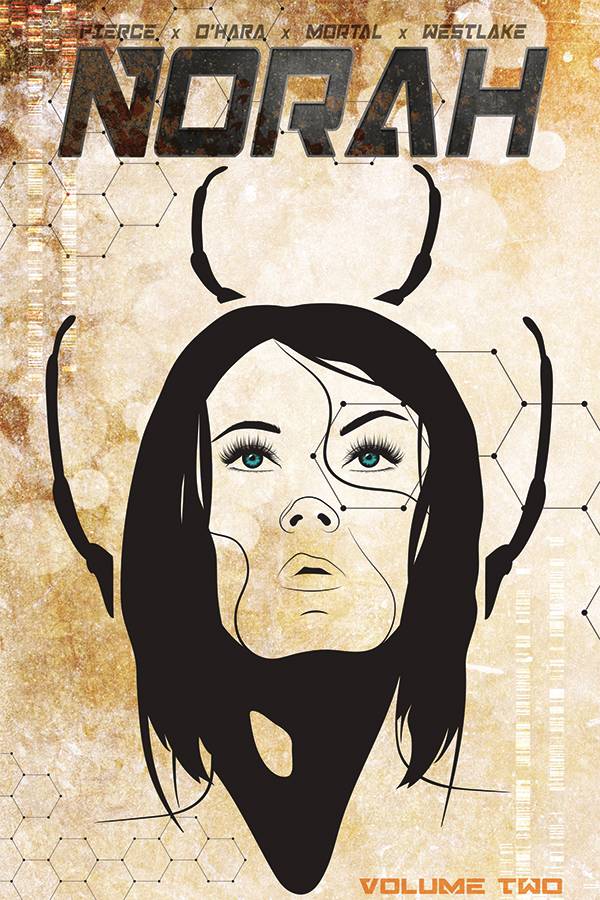 OCT201573
(W) Kasey Pierce (A) Kelly O'Hara
In the second Volume of this beautifully painted sci-fi noir, a prequel to Volume One, Norah comes to know humanity's real threat and her role as a pawn in an intergalactic web of lies.
In Shops: Dec 30, 2020
SRP: $14.99 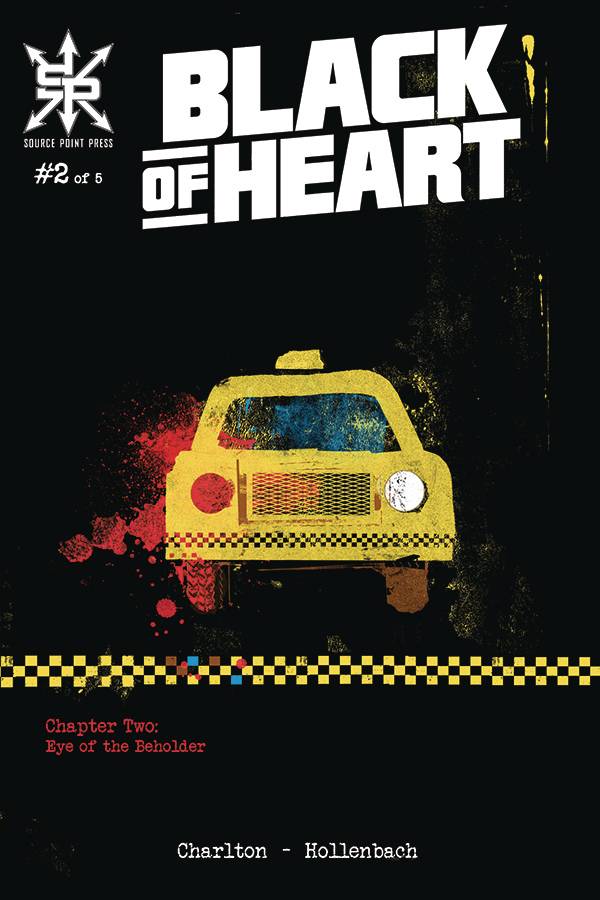 OCT201574
(W) Chris Charlton (A) David Hollenbach
Weeks later, Detective Drake Harper finally catches a break in his serial murder case and is led on a high-speed chase through the heart of New York City – but who is the cat and who is the mouse?
In Shops: Dec 30, 2020
SRP: $3.99 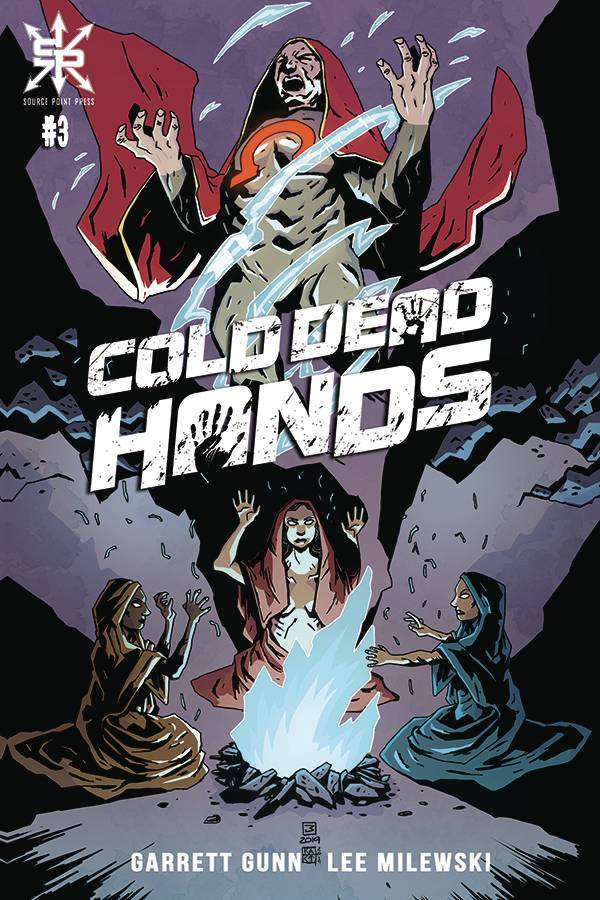 OCT201575
(W) Garrett Gunn (A) Lee Milewski (CA) Brian Balondo
The origin of the Cold Dead Hands is revealed. Kit travels to the final resting place of Athos Matis in an effort to find answers to the mystery of his supernatural abilities.
In Shops: Dec 30, 2020
SRP: $3.99 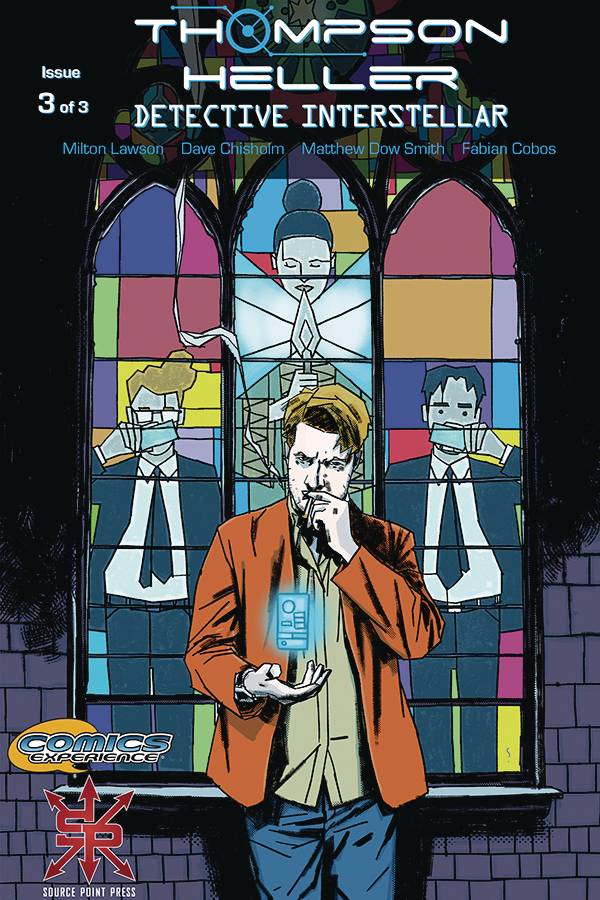 OCT201576
(W) Milton Lawson (A) Dave Chisholm (CA) Matthew Dow Smith
This is like the mad conclusion, yo. Heller takes a high-dollar client and before he knows it, there's a river turning invisible, an astrophysics eccentric warping the fabrid of space-time, electro-sword wielding assassins, vanishing traffic control staffers, and crazy whaked-out art from the brilliant Dave Chisolm. This one's off the chain, out for lunch, insane in the membrane, and culminating in a visual symphony of madness that'll leave you wanting a sequel!
In Shops: Dec 30, 2020
SRP: $3.99 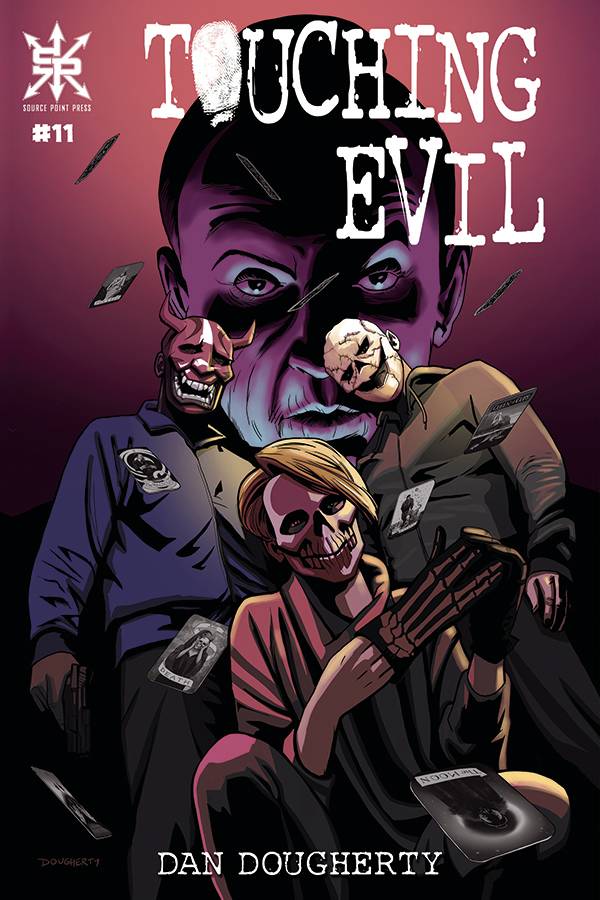 OCT201577
(W) Dan Dougherty (A) Dan Dougherty
It's Halloween season in New Orleans, and Ada is on the hunt for a mystic who supposedly can break the curse that lets her kill evil with the touch of her hand. Little does she know her enemies are awaiting her arrival. Meanwhile, Brody continues his vengeance quest and a deal is struck that will send Ada down a dark and dangerous path.
In Shops: Dec 30, 2020
SRP: $3.99

Something Is Killing The Children and Blue Flame Top Advance Reorders

Greetings from the coal face of the direct comics market. Where retailers try to increase their advance reorders of certain comics ahead of sale. Where

Everything Is Meta – A Blatant & Wholly Transparent Appeal To You

With the Loki TV show about to drop on Disney+, Marvel has been pumping out a number of Loki graphic novels, might that reveal Lady Loki?

The Strangely Scientific Debut of Adam Strange Up for Auction

The debut of Adam Strange in Showcase #17 from DC Comics in 1958 came just as the space race was heating up.

Wonderbound, the Middle Grade and Young Adult imprint of Vault Comics, has announced HELLO MY NAME IS POOP, a new middle-grade graphic novel written by

The Future in the Hands of Red Hood? Future State Gotham #1 Preview

America Chavez: Made In The USA #3 Review: Disappointing

America Chavez has been astonished by her otherworldly origins, her overwhelming power, her brusque manner, and her striking style. What if, however,

In this preview of Wonder Woman #772, the titular Wonder Woman comes up against her greatest challenge ever: snake flatulence.