Boom's excited to debut Grim, a comic series about a young-looking woman ferrying the newly dead to the afterlife. Boom tells us this series from writer Dr. Stephanie Phillips, artist Flaviano, colorist Rico Renzi, and letterer Tom Napolitano sold over 75,000 copies of their first issue. Rich called it Boom's biggest creator-owned launch of 2022.

You win a No-Prize if you guessed that Grim's starting point is Death from Sandman. Then again, you could argue that Neil Gaiman & Co. hardly have a patent on personifying death. Regardless, Grim starts out familiar. In Grim's case, Jessica Harrow is one of many dead souls leading the freshly deceased to the afterlife.

Flaviano and Renzi do a good job of staking out a visual language for the series. I'm a fan of the bright red of the scythe blade. It's an old trick, but the whiteout (whether actual or digital) used for snow makes me happy. The three panels below are some of my favorite from the issue. Look at that snow!

I'm not sure what I think of the main character or whether I can get over the initial similarity to the other Death from comics. Then again, comics have a long history of expys and familiar characters with the serial numbers filed off. In her defense, Dr. Phillips writes Grim in an enjoyable style.

If you can find a copy, give Grim a look. If not, give it a month or two for Boom to reprint the comic. There are many worse things than familiarity.

Jessica Harrow is dead. But her journey has only just begun! Discover the world of the afterlife, where Jessica has been recruited as a Reaper, tasked with ferrying countless souls to their final destination. But unlike the rest of the Reapers, she has no memory of what killed her and put her into this predicament. In order to unravel the mystery of her own demise, she'll have to solve an even bigger one – where is the actual GRIM REAPER? From acclaimed writer Stephanie Phillips (Harley Quinn) and fan favorite artist Flaviano (New Mutants) comes a bold new vision of what comes after, and the nature of death itself! 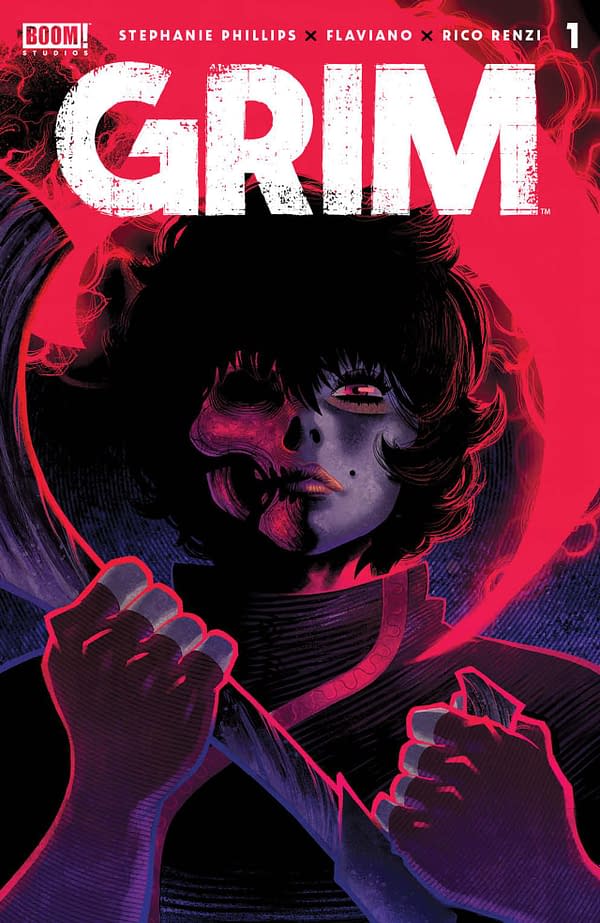 Review by James Hepplewhite
6.5/10
If you can find a copy, give Grim a look. If not, give it a month or two for Boom to reprint the comic.
Credits
Writer
Dr. Stephanie Phillips
Artist
Flaviano
Colorist
Rico Renzi
Letterer
Tom Napolitano