Marvel Comics recently saw the revival of their comic book title, The Future Foundation, running alongside the new Fantastic Four series, and showing what happens to those they left behind, the Power Pack kids and aliens working (currently with Yondu) to recreate the Marvel Multiverse after Secret Wars, investigate its anomalies and generally mess around in the fundamental substructure of storytelling. Written by Jeremy Whitely and drawn by Will Robson and Paco Diaz, it has a cartoony kinetic feel, a little like Art Adams crossed with Jamie McKelvie and was a great example of great power being used rather irresponsibly. Even by kids trying to do their best, but rushing in headstrong.

Sadly, despite some strong reviews, Bleeding Cool understands from a recent writers summit, that the series has been cancelled by Marvel Comics. Currently, only two issues have been published so far, but I understand the decision was made soon after the publication of the first issue a month or so ago.

It seems not even the appearance of The Maker from the Ultimate Universe or the surprise return of Rob Liefeld and Jeph Loeb's version of Bucky from Heroes Reborn, Rikki Barnes, could save this comic. But then again, the series was cancelled internally at Marvel before anyone had even known she was in the comic… 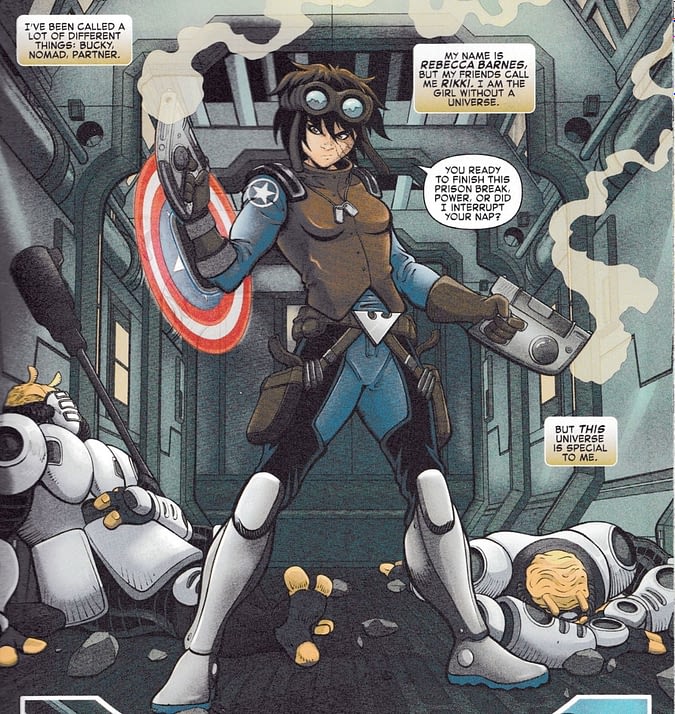 This time the cancellation had everything to do with sales and anticipated sales – and nothing to do with Ike Perlmutter falling out with Fox Studios. Here are the current two issues still solicited for publication. I wonder what other surprises they will contain on their way out? And will we get a fifth in December, or is that it?

FUTURE FOUNDATION #3
(W) Jeremy Whitley (A) Will Robson, Paco Diaz (CA) Carlos Pacheco
RAINBOWS AND REECE'S PIECES!
Owen Reece – a.k.a. Molecule Man – once helped reshape the entire multiverse. Now his body is scattered across the cosmos – and the Future Foundation is out to put him back together.  But they're not the only ones. It's a race across space as the Maker sets his sights on pieces of Reece! And with a prison security system out to murder them all, the Future Foundation is already behind the mark. But the Foundation has a secret weapon. Find out at last who Julie Power set out to rescue from that intergalactic prison – and why the Maker should be very, very afraid.
Rated T In Shops: Oct 02, 2019 SRP: $3.99

FUTURE FOUNDATION #4
(W) Jeremy Whitley (A) Alti Firmansyah (CA) Carlos Pacheco
LOST IN SPACE!
The Future Foundation's fight to save Molecule Man comes to a head! And there'll be no rainbow after a storm like this. This issue, someone dies. Don't miss Professor Power and his team meeting their Maker – and more!
Rated T In Shops: Nov 13, 2019 SRP: $3.99

This may have been an even wiser investment than it may have seen at the time. All four covers to X-Men #1 that form a quadriptych cover for the fifth,

Am I doing this to Poison Ivy? It appears so. Because you remember the fuss that the appearance of the Batpemis had in Batman: Damned #4, right? The fuss

Moon Knight #7 Preview: The Thing is Still Cool Though

Moon Knight reveals the pettiness of The Avengers who took him off their Hanukkah card list in this preview of Moon Knight #7.

Star Wars: Doctor Aphra #18 Preview: Blast From the Past

Sana has trouble remembering her college days in this preview of Star Wars: Doctor Aphra #18... but to be honest, who doesn't?

In this preview of Silk #1, in stores on Wednesday from Marvel Comics, the titular Silk has no tolerance for the TikTok generation.