Thanks to ComicBook, Newsarama and CBR… more as they get released, Marvel solicitations for February 2016. Ms Marvel gets dropped from the Avengers (though she seems to be back by the next issue) and Old Man Logan is here to kill Hulks… UPDATE: And as we thought, Cloak And Dagger are back… UPDATE x2: And as we have no clue at all, Darryl McDaniels of Run DMC is writing Guardians Of Infinity.

GUARDIANS OF INFINITY #3
DAN ABNETT, DARRYL "DMC" MCDANIELS & EDGARDO MIRANDA-RODRIGUEZ (W)
CARLO BARBERI & JUAN DOE (A)
Cover by GARY CHOO
VARIANT COVER BY MICHAEL CHO
variant COVER by JUAN DOE
ALL TOGETHER BEHIND ENEMY LINES!
• The only way out is in, as all the Guardians sneak aboard the ominous Structure.
• The gene-cruited Newcomers are swarming: they're gearing up for something and that can't mean anything good!
• Plus, The Thing and Groot are in search of a singularly powerful object located in New York City in a story by DARRYL "DMC" MCDANIELS, EDGARDO MIRANDA-RODRIGUEZ and JUAN DOE.
40 PGS./Rated T …$4.99


SPIDER-GWEN #5
JASON LATOUR (W) • ROBBI RODRIGUEZ (A/C)
VARIANT COVER BY MICHAEL CHO
• Captain George Stacy has always been a big force in Spider-Gwen's life.
• But knowing that his daughter is the Spider-hero swinging around the city has taken its toll on him. Can he come to grips with the knowledge?
• Can she handle her police captain father if he can't?
32 PGS./Rated T …$3.99

SPIDEY #3
ROBBIE THOMPSON (W) • NICK BRADSHAW (A/C)
VARIANT COVER BY TBA
IN THE JAWS OF THE LIZARD!
• As Peter Parker finds his footing at school and with GWEN STACY…
• …SPIDER-MAN finds himself face-to-face with the LIZARD!
32 PGS./Rated T …$3.99


AMAZING SPIDER-MAN #7 & 8
DAN SLOTT (W) • MATTEO BUFFAGNI (A)
CoverS by ALEX ROSS
Issue #7 – VARIANT COVER BY MICHAEL CHO
• Cloak and Dagger are serving MISTER NEGATIVE in his war on Spider-Man! But how?!
• Things get even worse as Mister Negative inverts Peter Parker himself!
32 PGS. (each)/Rated T …$3.99 (each)

• Deadpool and Quicksilver take a break from the Uncanny Avengers' secret mission to help the NYPD out of a jam.

• And after the tragic events in Boston, the Inhumans have a serious beef with the newest Avenger, Synapse.

• Plus: The odd and tragic fate of the Avengers Mansion is revealed! 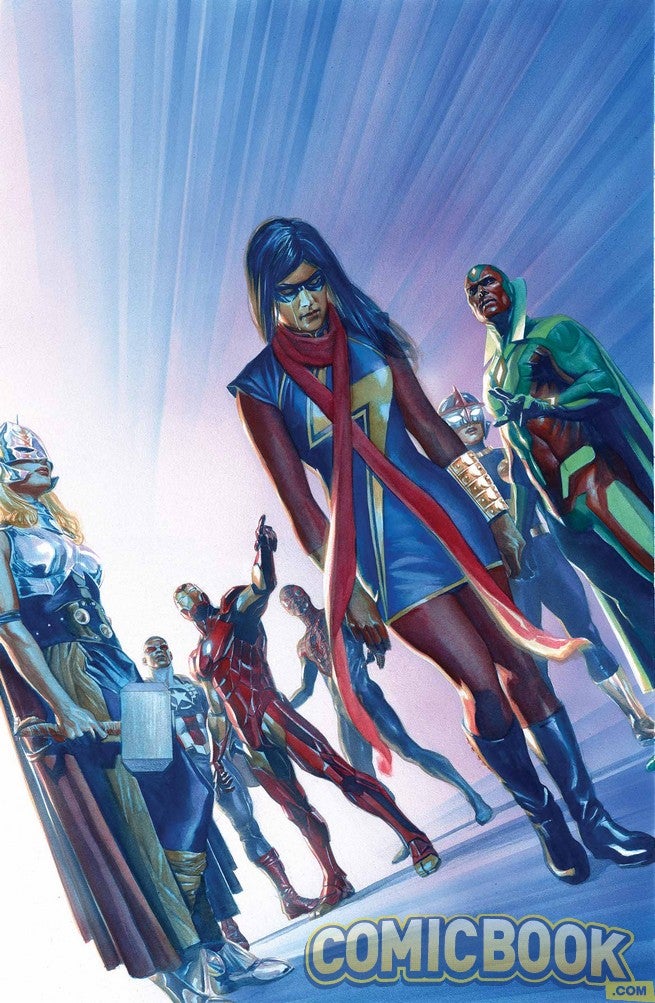 • Seven minus one equals tragedy! It's been Ms. Marvel's dream to be an Avenger – so why would they throw her off the team? What has she done – and will she recover? 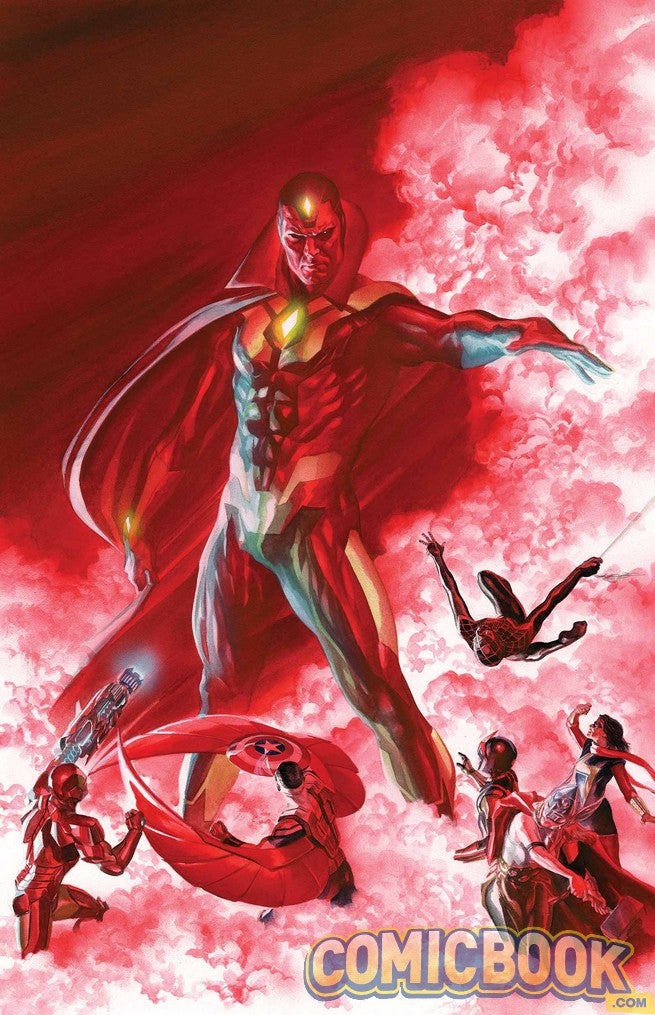 • The villain pulling the Avengers' strings stands revealed – someone who's been a part of Avengers history for almost all of the team's existence, in a way you've never seen them before! The All-New, All-Different Avengers' first story arc ends here – and you won't guess who's left standing on the last page. 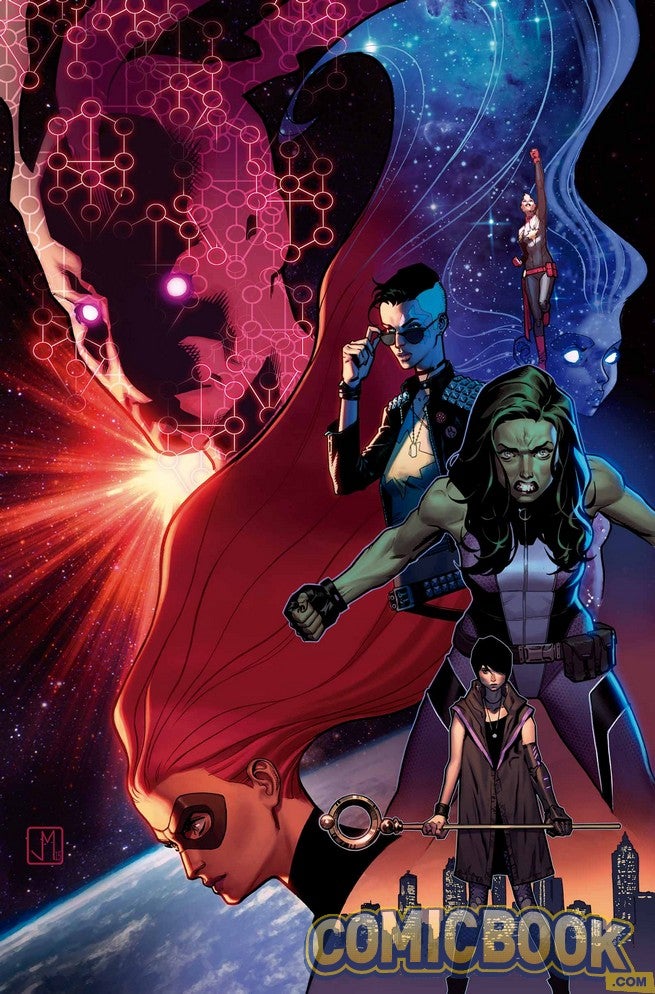 • As Antimatter grows increasingly dangerous, SHE-HULK, CAPTAIN MARVEL, MEDUSA, DAZZLER and NICO MINORU must put aside their differences and learn to become a real team – the team Singularity knows they can be – before it's too late.

• When a desperate battle in space with Antimatter goes awry it may be the death of one of them, just as this new team is beginning to find its way.

• Meanwhile Tempest Bell's analysis of Antimatter may not bode well for the future of A-Force. 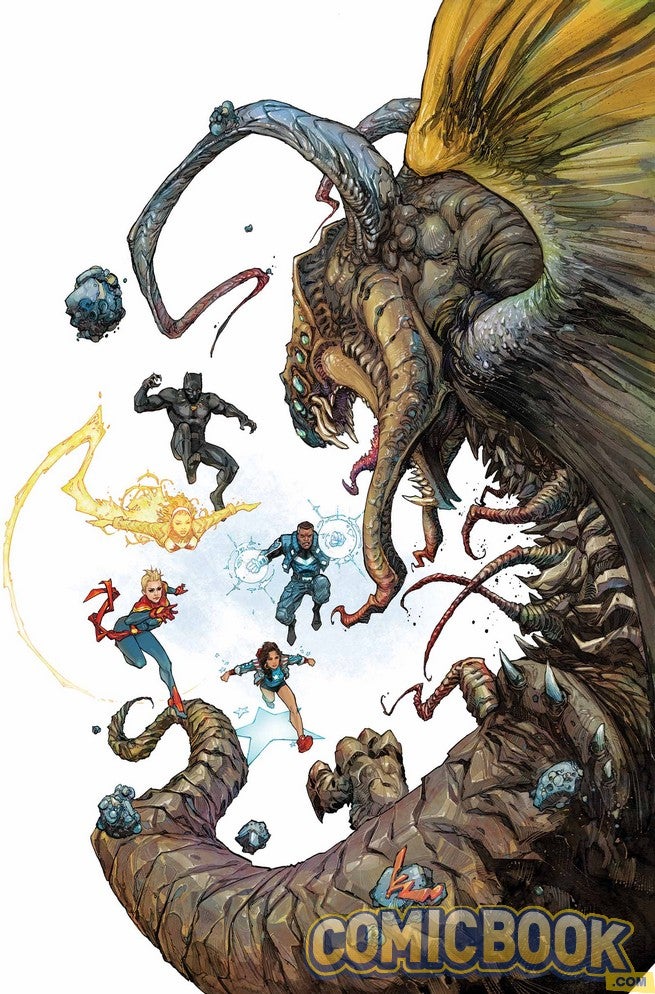 • The Ultimates are headed to the very edge of everything that is – and beyond! Destination: Outside!

• But on the way, they're going to have to deal with pan-dimensional parasites, rogue realities, universal systems…

• …and an enemy from Blue Marvel's past.

EXTRAORDINARY X-MEN #7
JEFF LEMIRE (W) • HUMBERTO RAMOS (A/C)
• As one team of X-Men stages a daring rescue mission in Weirdworld, another team stages one in the psyche of their teammate!
• Something happened to Nightcrawler that left his mind in turmoil. Determined to bring their friend back to sanity, Storm and Jean Grey enter his mind…but are they prepared for what awaits them there?
• Meanwhile, Old Man Logan, Colossus, Iceman and Magik discover just who it is they're on a mission to rescue in the wilds of Weirdworld…and the truth might tear the team apart!
32 PGS./Rated T+ …$3.99

DENNIS HOPELESS (W) • MARK BAGLEY (A/C)
STORY THUS FAR VARIANT COVER BY TBA (SEP158784)
DEADPOOL VARIANT COVER BY TBA (NOV150887)
CLASSIC ARTIST VARIANT COVER BY TBA (SEP158785)
"FLESH WOUNDS" STARTS NOW!
• Reunited at last, the All-New X-Men hit the road on a mission to write their own futures and be the heroes they believe mutantkind needs most.
• But for one X-Man, being a hero means perpetually leaping into harm's way, even when it means suffering grievous injury.
• When the unstoppable All-New Wolverine runs up against the immovable Blob, will her self-destructive instincts get the better of her?
32 PGS./Rated T+ …$3.99

ALL-NEW X-MEN #5
DENNIS HOPELESS (W) • MARK BAGLEY (A/C)
• Which is more stubborn: A teenage X-Man or a homicidal villain whose power is literally to render himself immovable?
• Find out here, when the ALL-NEW X-MEN take on THE BLOB!
32 PGS./Rated T+ …$3.99

JEFF LEMIRE (W) • ANDREA SORRENTINO (A/C)
VARIANT COVER BY MICHAEL CHO
VARIANT COVER BY TBA
• For Old Man Logan, home is a wasteland in the distant future, one overridden by hillbilly Hulks who extort and torture civilians for fun.
• But now, mysteriously finding himself in the present, Logan is hellbent on preventing that future from coming to pass.
• And the best way to keep the Hulk population from surging in the future is to eliminate them altogether in the present…starting with Amadeus Cho, the Totally Awesome Hulk!
32 PGS./Parental Advisory …$3.99

Deadpool might be an Avenger now, but he's also got his own private team of mercenaries…the legally-cleared-to-be-called MERCS FOR MONEY! Got a problem you can't solve on your own and a pile of money you'd like to be rid of? Just call Deadpool, Stingray, Massacre, Solo, Foolkiller, Terror and Slapstick and watch as that problem is shot, stabbed, eviscerated, pulverized and generally made bloody!

And Spider-Man #1 by Brian Bendis and Sara Pichelli…

Friday morning, Bleeding Cool reported that Bad Idea Comics were trying to get people to pay $14 for a used Final Five sticker in the vague expectation of

Bad Idea Comics has been running all manner of promotions to both excite and enrage comic book collectors, as long as people talk about them. Such as

The Comic Book Creator Credits In Hawkeye Episodes One And Two

The Disney+ Hawkeye show is out, two episodes worth, and it seems to have gone down rather well. But who are those listed in the Special Thanks section?

Death Of Doctor Strange: Spider-Man #1 Preview: Beyond the Grave

Spider-Man gets a message from beyond the grave in this preview of Death of Doctor Strange: Spider-Man #1, but he's too comatose to hear it.

Human Target #2 is in stores from DC Comics on Tuesday, and former JLI member Ice enters the hard-boiled story in this preview.

Black Bolt finds himself fighting giant sand crabs in the desert in this preview of Darkhold: Black Bolt #1, in stores Wednesday from Marvel Comics.

And finally, wrapping up the Black Friday edition of Friday Night Previews here on Bleeding Cool, it's X-Men: The Trial of Magneto #4.

Winter Guard #4 Preview: Perun Would Have Words With Thee

The Winter Guard is really in trouble now as they turn on their own knockoff Thor in this preview of Winter Guard #4, the final issue in this mini-series.

Warhammer 40,000: Sisters of Battle #4 is in stores from Marvel Comics on Wednesday, and you can read a preview here.