Despite not taking time to let as many cast members shine, The Orville #2: Artifacts really nails the science fiction requirements to deliver an interesting tale of the unknown in space. The helmsman Gordon again plays a pivotal role, and this does some savvy things; this issue makes it worth your time.

Before the Earth was even populated, the Zankon Empire ruled the stars with technology and power far beyond even the far future presented here. They hid a vast armada of starships in a nearly impassible nebula, and there it remained, surviving the race that created it by hundreds of thousands of years. Now the crew of the Orville and a professor who taught two of them in college have rediscovered these lost treasures and face a moral quandary on what to do with this newfound power.

Writer David A. Goodman, an executive producer on the show, does a great job matching the character voices and tonal balance of the show, delivering the challenges of the situation with perfect pacing, solid humor, and great adventure thrills. The artwork from David Cabeza, Michael Atiyeh, Richard Starkings, and Jimmy Betancourt will make you think you're watching the show unfold as the aforementioned helmsman follows his conscience and inadvertently leads the rest of them to a conclusion.

Like the show itself, this is some super enjoyable science fiction cloaked in the clothes of facetiousness. This small but efficient mini-series nails everything it needs to do, and that's a delight. RATING: BUY.

The Orville #2: Artifacts
By David A. Goodman, David Cabeza, Michael Atiyeh
In his quest to discover a legendary fleet of starships from a lost civilization, Ed's old astro-archeology teacher has lead the Orville into grave danger. The professor has not been entirely forthright with Ed and the crew–a fact they must now overcome if any are to survive this perilous endeavor. 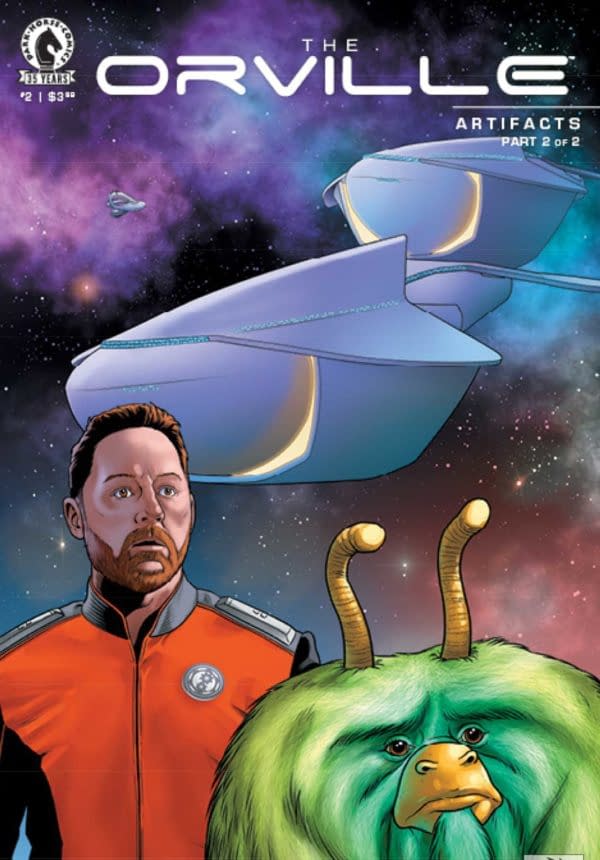 Review by Hannibal Tabu
8/10
What’s to be done about a lost fleet of warships on the edge of the galaxy, and what does Gordon’s uncomplicated morality have to do with it?
Credits
Editors
Dave Marshall, Konner Knudsen

Comic Store In Your Future: 25 Hot Comics By Rodman Comics

Researching comics is part of what I do—the ever-changing shifts in demand for comics that I try to keep up with. One man's junk is another man's

Thank FOC It's Sunday-  Planned to coincide and cover the demands of Final Order Cut Off at Diamond Comic Distributors on Monday. And now Lunar

The Coming of the Silver Surfer and Galactus up for Auction

Fantastic Four #48, with the introduction of Silver Surfer and Galactus, has been a Marvel milestone for decades.

On Instagram and Twitter, DC Comics Publisher Jim Lee has been sharing a day in which he recently invited George Pérez to the DC Comics headquarters in