The Ocean At The End Of The Lane is now The Ocean At The West End Of The Lane, having transferred from South Bank to the Duke Of York Theatre, holding its press night last night. And for some reason, Bleeding Cool was invited. The play is based on one of my favourite Neil Gaiman novels, so I was going to love it or hate it; nothing else would be allowed. And thankfully for all concerned, it was the former.

As a play, it is savage with the original text where it needs to be; it cuts deeps and gets straight to the action. For a play that adapts the work of a famously verbose writer, it does an excellent job of showing, not telling. And so much of that is from the lead actor James Bamford, who plays the unnamed Boy, a just-turned-twelve-year-old boy, not yet a teenager, with a head full of young thoughts on a shoulder that is starting to bear the adult world upon it. He is gangly, ideas come out faster than his mouth can frame them, and you see his discomfort with a world outside of his books, with every twitch, every flung arm, every misstep. It is an incredibly believable performance that belies how much effort it takes to show someone already in two worlds, stepping from one to the other, trying one on for size. It's with this characterisation that the play forms itself. The two worlds of reality, the everpresent glowing door as a stage device, from states of being, going through the door takes you places, transforms you, gives you a view into other ways to be or to be aware of those who are watching you.

And in typical Neil Gaiman style, we have a Hecate who are as conversant with electrons and medical biology as they are the sun, the moon, and the stars. Penny Layden as Old Mrs Hempstock dominates with caustic wit, given the juiciest of lines, but thoroughly inhabits a sense of resigned duty and the "snippage" scene remains a highlight. While Nia Towle as Lettie Hempstock doesn't so much go on a journey as takes us on a journey understanding who she is. She was always what she was at the end; we just couldn't see it – and that revelation is itself portrayed in dance. The magic on stage is only matched by that of the story.

It's just one example of the remarkable stagecraft of this play that brings in trapdoors, giant puppetry, wirework, strobe effects, and a soundscape that screams and jars as much as Tenet, but at no point loses track of the very small and human story playing out at its heart. And always returns to the most intimate scenes, which take up far more of the play. To be big and small on the stage is easy, to do both in the same world never losing track of the other, and bringing the emotion through is extremely hard, and The Ocean At The End of The Lane makes it feel the most natural thing in the world. And having a bench just appear at the most opportune time in the opening scene is a great way to tease how this is all going to play out, as are hands in unexpected places for breaching barriers that would otherwise be respected.

There's another example early on, when the cast leaves the stage and the set is moved by actors all in black, to be replaced by another location. A stage tradition and one accepted by an audience. But here, the actor stops, pauses, goes back. And the shadows also stop, move away from the props they were to replace, before the character leaves again and the shadows return to their set-shifting duties. The idea of almost catching out the set dressers during a production is something the likes of Mischief Theatre have done with the Goes Wrong plays for laughs. Here it is done for dramatic dread and eerieness, the idea that there are forces that can't be seen but manipulate the environment around you. And in that moment, the audience getd a small inkling into the idea of other, unseen realities. I don't think I've ever seen that done before like this, such a tiny moment from writer Joel Horwood and director Katy Rudd that has such a great impact on the rest of the play. A true moment of theatrical magic, that shifts the audience perspective enough to  prepare its audience for what is to come, making us willing and complicit storytellers.

So a mention of The Dark Crystal at the cinema grounds you in the early eighties, but also prepares you to accept the puppetry and world of the Hunger Birds, who literally extend beyond the stage and into the balconies, devouring the fourth wall. Bringing up Elric foreshadows the doom that then Boy may bring to everything. Namedropping the Narnia books entertainingly lampshades similarities between Laura Rogers needle sharp and focused portrayal of Ursula and the White Witch, but also sets up a later escape, the inspiration of Aslan, and the idea of adults forgetting what they knew as children. The older Boy and his father both played by Nicolas Tennant, also reminds us quite literally how we become our parents in ways we could never fathom.

That is also at the heart of why this play works on different levels for different audiences. Children get a horror play for kids, with proper fear and dread without lazy jump scares. We have a fear of not being believed, the fear of being hurt by those we love, of trying to be better than we are, but always knowing we have failed. Adults get to remember that childish perspective, to see how we are as parents from their perspective, and the longing for a perspective that has faded with the decades, into the memory of memories. Such a personal story by Neil Gaiman, with details of his youth – or his memories of them – liek the very best poetry speak to us all, we can all superimpose the oceans at the end of our lane, that feeling of being an imposter, moving from one way of being into another, while believing we know so much about the person we are, but nothing about anyone else. And seeing the Ocean brought to life on stage using the simplest of stagecraft to suggest the wildest and unknowing of experience ripped applause from the audience like we were puppets on the stage ourselves.

We were as much possessed by the magic of the stage to respond thus, as anyone on up on the boards. The Ocean is everything we hope and dream our lives, our world, our futures could be. And sometimes a bucketful is all we need and that's fine. We can fill it up with our own tears, and coming face to face with our past selves on stage; all we were, all we thought we could be, and all we are now was an intense emotional moment. Bring tissues, either for you or for those in the seats around you, they will be needed. It may be horror-light for kids, but it exposes the thoughts, memories and inner tragedies we try to push away as adults but could really learn from. Consider this therapy on the stage.

The Ocean At The End of The Lane is based on Neil Gaiman's novel of the same name in which a man, returning to his childhood home, finds himself standing beside the pond of the old Sussex farmhouse where he used to play. He's transported to his 12th birthday when his friend Lettie claimed it wasn't a pond, but an ocean. Plunged into a magical world, their survival depends on their ability to reckon with ancient forces that threaten to destroy everything around them. Produced by the National Theatre, written by Joel Horwood and directed by Katy Rudd, it stars a theatrical cast, rather than familiar names from stage and screen. The play has been extended until the 14th of May next year, but then that will be that. Worth booking now – and while you will get the story from restricted seats, you will not get all the magic.

The Ocean At The End of The Lane Returning to his childhood home, a man finds himself standing beside the duck pond of the old Sussex farmhouse where he used to play. HHe'stransported to his 12th birthday, spring half term. When his dad was struggling to make ends meet and his friend Lettie claimed it wwasn'ta pond, but an ocean… Plunged into a magical world, the cchildren'ssurvival depends on their ability to reckon with dark, ancient forces that threaten to destroy everything around them. The 16-strong cast are Ruby Ablett, James Bamford (Boy), Emma Bown, Charlie Cameron, Jeff DD'Sangalang Kieran Garland, Siubhan Harrison (Ginnie Hempstock), Miranda Heath, Penny Layden (Old Mrs Hempstock), Tom Mackley, Charleen Qwaye, Grace Hogg-Robinson (Sis), Laura Rogers (Ursula), Nicolas Tennant (Dad), Nia Towle (Lettie Hempstock) and Peter Twose. The Ocean at the End of the Lane introduces audiences to GGaiman'smagical world and the much-loved characters that inhabit it, showcasing the production's set design by Fly Davis, costume and puppet design by Samuel Wyer. Movement direction is by Steven Hoggett, composition by Jherek Bischoff, lighting design by Paule Constable, sound design by Ian Dickinson, magic and illusions direction and design by Jamie Harrison and puppetry direction by Finn Caldwell. Casting is by Lauren Evans.

The Ocean At The End Of The Lane 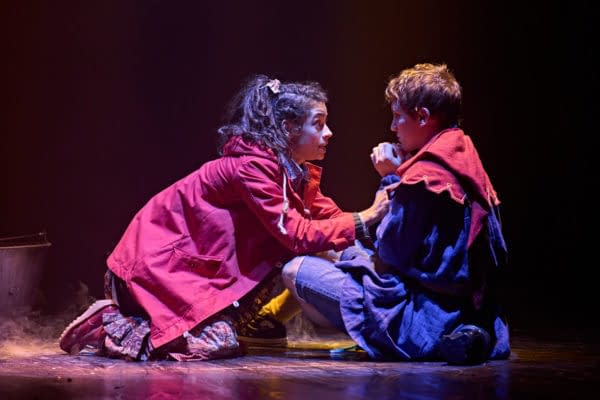 Review by Rich Johnston
9/10
Horror-light for kids, but for adults, The Ocean At The End Of The Lane exposes the thoughts, memories and inner tragedies we try to push away as adults but could really learn from. Consider this therapy on the stage.

Peach Momoko and Zack Davission will let their version of Scarlet Witch end the Demon Days series at Marvel Comics on May.

Are yowu an Image Comics founder? Will Bad Idea Comics persuade you to draw a cover for them?

Look Out For The Little Guy is the Ant-Man in-world memoir of Scott Lang, from convict to Avenger and beyond, and they're actually publishing it.

White Savior creators Eric Nguyen and Scott Burman took a long path to their new comic book, including being rudely interupted by The Weeknd.

The Return of The Justice League In Late 2023 From DC

DC is bringing back Justice League later this year as part of Dawn Of DC. All it needs is a little... exposure.

Peach Momoko and Zack Davission will let their version of Scarlet Witch end the Demon Days series at Marvel Comics on May.

Are yowu an Image Comics founder? Will Bad Idea Comics persuade you to draw a cover for them?

Coming to fans from a Galaxy Far, Far Away, Hasbro has unveiled new Star Wars collectibles are on the way like an incredible new Vader

Look Out For The Little Guy is the Ant-Man in-world memoir of Scott Lang, from convict to Avenger and beyond, and they're actually publishing it.

White Savior creators Eric Nguyen and Scott Burman took a long path to their new comic book, including being rudely interupted by The Weeknd.

The Return of The Justice League In Late 2023 From DC

DC is bringing back Justice League later this year as part of Dawn Of DC. All it needs is a little... exposure.