Black Panther: Wakanda Forever is another phase four entry that is a bit of a mess in the story and pacing department, but it is bookended by gut-punch memorial scenes and excellent performances from the entire cast. [This review will be spoiler-free]

Director: Ryan Coogler
Summary: The people of Wakanda fight to protect their home from intervening world powers as they mourn the death of King T'Challa.

The ongoing theme of all of the phase four Marvel movies is that they are all kind of a mess. Some of the films manage to rebound from being a mess, and some don't; it is a little concerning that all of these stories have been so clunky and weirdly executed. In terms of the scale, Black Panther: Wakanda Forever does recover from its clunky pacing and story for the most part, but it's also a movie where there is very little anyone could have done to make it all less clunky. Everything in this movie is important and leads to other story points so that nothing can be cut. The memorials that bookend the film are obviously off the table regarding things that could be cut to make this movie a little shorter. It clocks in at two hours and forty-one minutes, and, unfortunately, there are times when you very much feel all of those minutes.

The main question everyone will ask the minute they walk into this movie is how they handle the passing of Chadwick Boseman within the film's universe. It won't be spoiled here, but it is very tastefully done and the best possible option that they could have hoped for. Those moments during T'Challa's funeral are a gut punch that really sets the tone for the entire movie. This film is very different from Thor: Love and Thunder. This is a movie looking to do an Up which is "make you cry before the title credits." Producer Nate Moore also spoke about how there is only a post-credits scene because the ending speaks for itself, and ending it any other way wouldn't be right. Moore was correct, and any sort of Marvel world-building bullshit at the end of this movie would not have worked. This is a different breed, very much in its beginning and its ending.

The rest of the movie is where things are a little more generic in terms of what you expect from a Marvel movie. Black Panther: Wakanda Forever still does an excellent job of pulling us into this world and making us understand the plight that this country is going through now that the King and Protector have passed away. They are vulnerable, and the world is circling like hawks to try and pounce on them. Once again, this is a film that doesn't shy away from the effects of colonialism and how it is very much still going on today. The conflict that leads to Wakanda and Talokan also feels a little too real, even if we're talking about a race of people that live under the water.

The Talokanil and how Black Panther: Wakanda Forever decides to show them is fascinating. If you [like me] were watching the footage and wondering why some of them were blue, but other times it looked like they were not, there is an explanation for that. The movie makes the distinct choice to make the people of Talokan look more human when they are in the water and more otherworldly when they are out. In fact, the explanation for how both the Talokanil and Namor came to be is extremely well done. Tenoch Huerta does an excellent job as Namor all around, capturing that rage he is carrying within him. The film blends real-world historical events with fantastical rather seamlessly.

However, it's also a lot of information that we have to know for later elements of the movie to make sense, and the second act going into the third act of Black Panther: Wakanda Forever is just insanely clunky. This is actually one of the weaker third acts of phase four because it didn't feel like that much of a culmination. The stakes were plenty high, but the action, which takes place in neither Wakanda nor Talokan, makes it visually the least interesting battle or set piece we've seen so far. Ryan Coogler and his team have done an amazing job of creating Wakanda, making it so vibrant and beautiful, and making it feel so lived in. They do the same thing for Talokan as well. But while the location choice for the final set piece makes sense storywise, it feels like such a waste of beautiful world-building. It's one of the reasons the third act feels a little underwhelming despite the movie trying to tell us it's very epic.

Letitia Wright is asked to carry most of Black Panther: Wakanda Forever with Angela Bassett and Huerta there as backup. It's quite a lot for a young actress to take on, and while we can say a lot about Wright's politics; she turns in a strong performance here. We can understand why Shuri reacts the way she does to all of the things that happen throughout the film. We understand her grief turning into anger because that is something so many people have experienced. Bassett's work is also powerful in this film, and you can really feel her pain.

Winston Duke, Danai Gurira, Florence Kasumba, Michaela Coel, and Lupita Nyong'o continue to own almost every scene they are in. Duke and Gurira, in particular, have interesting subplots that are fun to explore. Dominique Thorne is a delight as Riri Williams, and her show will be fantastic. Much in the same way that Iman Vellani walked out as Kamala Khan, and you knew she was a star, Thorne is the same. Once she is introduced, she plays a pivotal role as well, so she isn't a cameo either. That part is for Martin Freeman and his maybe five minutes of screentime.

Black Panther: Wakanda Forever is a little clunky in terms of its story, pacing, and overall execution, but the parts that work, work really well. The love everyone involved in this production had for Boseman can be felt from when the movie starts to when the post-credits scene ends. It's another phase four mess, but it's a mess that manages to make up for it by being emotionally moving and featuring some standout set pieces and world-building. 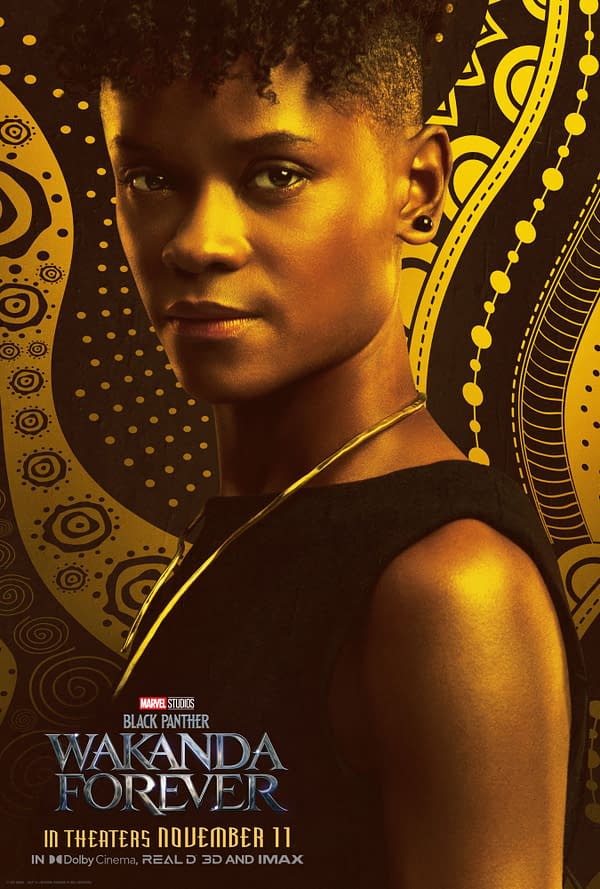 Review by Kaitlyn Booth
9/10
Black Panther: Wakanda Forever is another phase four entry that is a bit of a mess in the story and pacing department, but it is bookended by gut-punch memorial scenes and excellent performances from the entire cast.

An LITG runaround the previous day on Bleeding Cool, who was reading what and when, as well as today's birthdays!

Metallica To Debut 72 Seasons In Theaters The Day Before Release

Join the Metallica Family in theaters on April 13th and be among the first the hear their new album 72 Seasons a day early.